In the fall of 1997, Michael Jordan and the Chicago Bulls began their quest to win a sixth NBA title in eight years. But despite all Jordan had achieved since his sensational debut 13 years earlier, “The Last Dance,” as coach Phil Jackson called it, would be shadowed by tension with the club’s front office and the overwhelming sense that this was the last time the world would ever see the greatest player of all time, and his extraordinary teammates, in full flight.

Download The Last Dance in Digital HD/4K from the iTunes store.

The Last Dance images are © ESPN Films. All Rights Reserved. 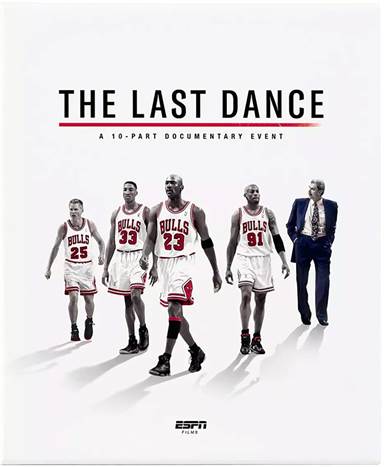 The top athletes in almost any sport are revered all over the world.  Their talent, their competitive spirit, their hard work, their strength and agility, and their mindset make them the best and they are celebrated for it.  They are paid handsomely, and they become celebrities.  Their goals are to play as long as possible and win often.  Amongst those athletes, there are a few who make it to the pinnacle; the top tier of all athletes in their given sport.  Boxing had Mohammed Ali, Soccer/Futbol fans had Pele and David Beckham, Baseball had Baby Ruth, Mickey Mantle, and Derek Jeter, and Basketball has Magic Johnson and Michael Jordan.

Jordan entered the National Basketball Association in 1984 and played for 15 seasons.  The majority of his time was spent on the Chicago Bulls and his teammates included the likes of Scottie Pippen and Dennis Rodman.  In his 13 years with the team, The Bulls won the NBA championship six times with 1997 being Jordan's last year.  Jordan's final season with the Bulls once again saw them win the championship and also included a film crew that had an all-access pass to the Chicago Bulls, allowing them to document the entire season.

In April of 2020, ESPN Films and Netflix brought a ten-part documentary miniseries about the man and the team to television audiences.  Garnering great reviews, The Last Dance won the Primetime Emmy Award for Outstanding Documentary or Nonfiction series and in July it became available to stream on Netflix.  Four months later, a limited-edition Blu-ray 3-disc set is set for release this week (hint, hint…the perfect holiday gift for the basketball/ Chicago Bulls fan in your life).  With bonus content and photos, the smartly packaged set gives viewers an inside look into the championship team, including all the drama.

Director Jason Hehir (30 for 30) masterfully intertwines recent interviews with footage from almost 25 years ago.  He keeps the episodes moving at an even pace and neither spends too much time on one individual nor on archival footage.  This blend of the present with the past makes for an interesting juxtaposition and is a reminder to everyone that time and distance from one's current circumstances helps them to see things in a different light.  This becomes obvious, at least in the case of Jordan, throughout the series. His retrospective views of his past situations show a growth and maturity that can only be acquired with age.

The technical specs include the standard 1080p high definition video resolution with a 1.78:1 aspect ratio and DTS-HD master audio 5.1.  Obviously, the video/audio clips from 1997 or earlier have some graininess to them but the more recent interviews are sharp, and the audio is clean.  The Blu-ray set not only has all ten episodes but comes packaged with a 28-page gallery booklet, a timeline foldout leaflet, and over four hours of bonus features including:  Exclusive Never-Before-Seen "The Last Dance" Bonus Interviews, "Game 6: The Movie", Stuart Scott & Michael Jordan "Sunday Conversation," June 1998—Never-Before-Seen Uncut Version, "In-the-Moment" Archival Material, "SportsCenter" with Scott Van Pelt Roundtables, and The Jalen & Jacoby Aftershow" with Jason Hehir.

While it helps to be a fan of basketball and to have been alive during the era of the Chicago Bulls championship seasons, it isn't completely necessary to enjoy The Last Dance.  Simply watching how Hehir navigates through the hours of footage and interviews to bring together a cohesive view of the time and the players involved is amazing.  The fact that he could create something that everyone can understand and enjoy is a testament to his skill.

The Last Dance may be told through the story of a sports lens, it is more so a journey through which anyone could learn valuable lessons.