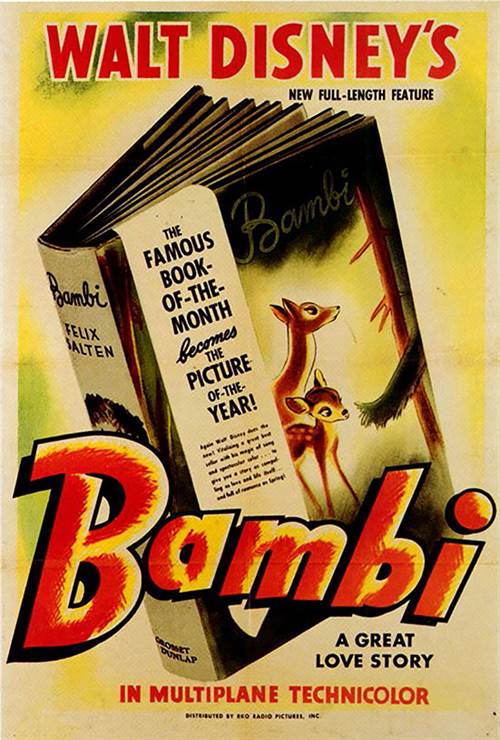 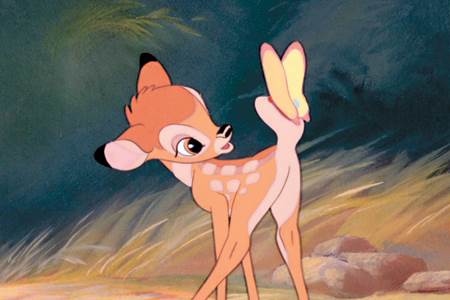 The animated story of Bambi, a young deer hailed as the 'Prince of the Forest' at his birth. As Bambi grows, he makes friends with the other animals of the forest, learns the skills needed to survive, and even finds love. One day, however, the hunters come, and Bambi must learn to be as brave as his father if he is to lead the other deer to safety.

Download Bambi in Digital HD/4K from the iTunes store.

Listen to the Bambi soundtrack on Apple Music. 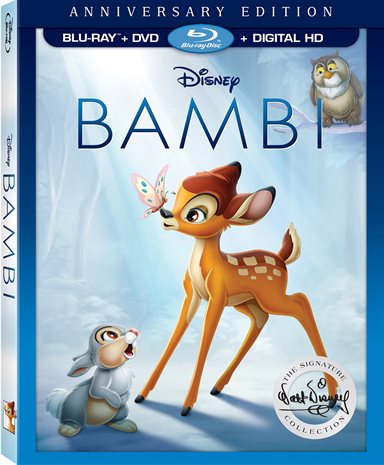 Disney has a habit of re-releasing classic movies from videotape to DVD to Blu-ray as they find a way to re-digitalize and/or improve the colors and animation.  Bambi's Anniversary Edition is the latest in a long line of classic movies chosen by Disney to be added to its Signature Collection. It's great to see these older films back in stores because new generations of Disney fans can enjoy them now too and add them to their home video library.

In a forest, a fawn named Bambi is born.  Bambi is destined to be Prince of the Forest and meets friends along the way, such as Thumper and Bumper.  He witnesses his fair share of tragedy including having his mother killed by hunters and a forest fire destroying his home.  However, like all Disney films it has a moral and a purpose and in this instance that seems to be that no matter what, Bambi is a story of perseverance and maturity.  It a story that despite already being 75 years old, will continue to delight audiences for the next 75 years or more.

Predating another Disney classic, The Lion King, Bambi is born a prince, survives tragedy and the "teenage years" to eventually take his place as the prince.  The film also includes a love story among the harshness of winter and starvation and the dangers of man.  Based on Felix Salten's original story, the movie encompasses all the classic elements we have come to expect.

The video is presented in 1080p with an aspect ratio of 1.35:1.  This Anniversary Edition comes with a Blu-ray, DVD, and Digital HD copy of the film.  The Blu-ray has a resolution of 1080p with an aspect ratio of 1.35:1.  The Codec is MPEG-4 AVC.  The colors are remarkable and the video quality amazingly clear.  For being 75 years old the transfer is sharp and the colors are vibrant and crisp.  Audio is presented in English DTS-HD HR 7.1.  Crisp and clear, the details of the forest fire can be heard, as well as the shocking gunshot that ends the life of Bambi's.  The animation was well done back in 1942 which is a testament to team that drew it as it still stands up today.

There are three ways to watch the movie- the theatrical version; the Disney View Version (presented with pillar box artwork that fills in the black space on widescreen televisions); Inside Walt's Story Meetings: Extended Version (adding an additional almost 30 minutes to the movie with story meetings from production, including additional bonus materials not found any other place).

Bonus features included on this Anniversary Edition are on the Blu-ray disc unless otherwise noted:


The Blu-ray also contains bonus features that were provided in prior releases such as:


The Digital HD comes with one exclusive bonus feature- Celebrating Tyrus Wong.  This is almost a nine-minute bonus of how Mr. Wong's life and art influences Bambi. This is a unique opportunity to really see what went into the actual creating of Bambi.  Also included with the actual discs, is a collectible art postcard/lithograph which is a terrific keepsake.

It's always wonderful to own the most recent version of a movie and this one doesn't disappoint especially because the other versions are all out of print now so they can't be bought unless through third party sales at inflated prices.   If you don't already own Bambi on Blu-ray or a Digital HD copy, this is an excellent investment.