Twenty years after an accident caused the death of the lead actor during a high school play, students at the same small town school resurrect the failed stage production in a misguided attempt to honor the anniversary of the tragedy - but ultimately find out that some things are better left alone.

Download The Gallows in Digital HD/4K from the iTunes store.

The Gallows images are © Warner Bros.. All Rights Reserved. 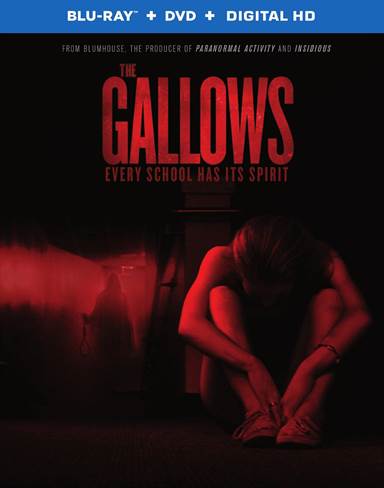 The Gallows is the latest in a long line of newer horror films that uses the "raw footage" technique to convince the audience they are watching real life events.  As one of the productions under the Blum House juggernaut (in conjunction with Warner Bros.), the movie has to live up to its brethren, such as the likes of Paranormal Activity and Insidious.  Sadly, it falls inadequately short.

The Gallows begins as a home video of a 1993 high school play where things go horribly wrong and the lead actor named Charlie is accidentally hanged mid production.  Fast forward to today when said high school is set once again to launch a production of the same play.  This time the lead, Reese (Reese Mischler, Medicine Men) is a horrible actor who is a former jock.  He happens to be attracted to the lead actress, Pfiefer (Pfeifer Brown, Big Time Rush), and that is his motivation for taking part in the play.  Reese's friends Ryan (Ryan Shoos, As Night Comes) and Cassidy (Cassidy Gifford, Blue Bloods) are also part of the production working behind the scenes as part of their required classwork.

When Ryan comes up with the brilliant plan the night before the performance is set to open (to trash the set so Reese can't perform and embarrasses himself), he, Reese and Cassidy break into the school and set about their task.  Pfeifer, supposedly seeing Reese's car outside, interrupts their mayhem and ends up in the middle of the supernatural chaos.  Apparently, Charlie wants to take his revenge out on the poor high schoolers and stalks and kills each one, except Pfeifer.  In the end, it is revealed that Pfeifer's mother was Charlie's girlfriend, and, somehow, Pfeifer is involved in it all.

Are you confused yet?  Yeah, so was I.  Is Pfeifer Charlie's child, exacting justice on Reese since his father was supposed to play the lead instead of Charlie the night he died?  By the end of the film, I'm not quite sure, which is one of many problems.

The story is ridiculous and full of holes, offering more questions than answers, and since the movie only has an 81-minute running time, it leaves one to wonder why they didn't flesh out the plot more.

The cast is young, inexperienced, and not all that good as actors.  Their terrified expressions are what you would expect from a group of third graders seeing a dead frog on the side of the road.

The production value is lacking and looks like it was made on a shoestring budget, which it probably was.  Adding to that, the poor filming quality used to make it look like some kids making a home video, and it plays out like one disaster after another.

The Blu-ray extras aren't any better.  There is a painfully unfunny gag real, a discussion between the writers and Producer Jason Blum, The original cut of the film, and 18 minutes of deleted scenes that are worthless.

There is nothing redeeming about The Gallows and I question why it ever got made.  I know it made a profit, which is, of course, the ultimate goal in movies; but it was unentertaining and moronic.  Don't waste your time or money.  Grade: F

brave
Wasn't what I expected i probably should have looked some reviews um but the story made sense and the scary parts were good
10/14/2015 12:08 PM EDT