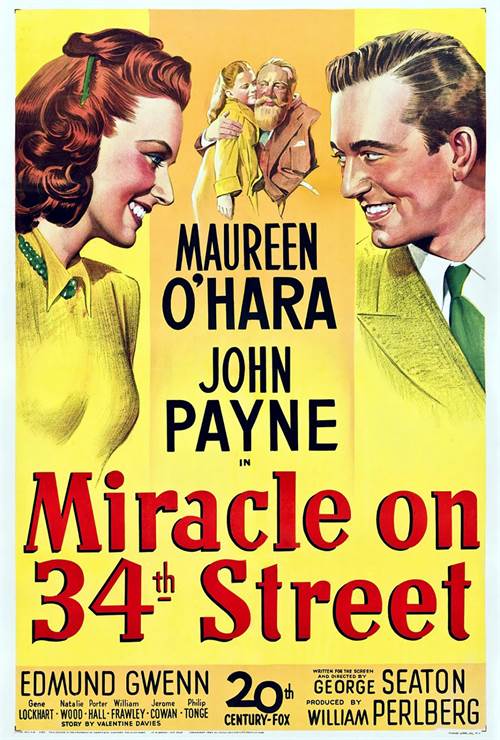 The holiday season is in full swing when a cultured gentlemen with twinkling eyes, and ample belly, and a snowy beard is hired as Macy's department store Santa. He claims his name is Kris Kringle, and soon fills everyone with Christmas spirit - except for his boss, Doris Walker, who's raising her daughter Susan to not believe in Santa but when Kris is declared insane and put on trail everyone's faith is put to the test as old and young alike face the age old question: Do you believe in Santa Claus?

Download Miracle on 34th Street in Digital HD/4K from the iTunes store. 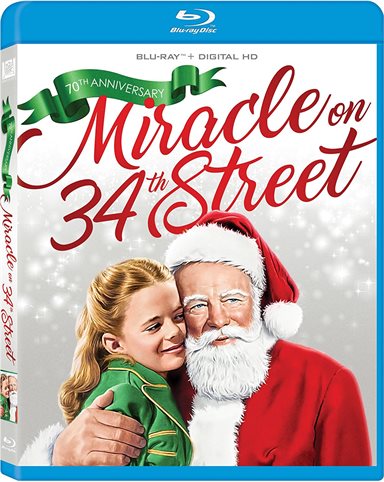 There is a reason they say the holidays are the most wonderful time of the year and everyone sings songs about it.  It's a time when people tend to be more generous and forgiving and a spirit of peace and goodwill abounds.  That is until you walk into your local mall or superstore.  The Holidays have become so commercialized that it seems many have forgotten the true meaning of the season.  People are always pushing and shoving and fighting for parking spots in order to get the best deals or the hottest toy or gadget.

Luckily every year there is a movie we can all watch to remind us if what truly matters – Miracle on 34th Street. This year the film will turn 70 years old and to honor this classic it is being re-released on Blu-ray, this time including a Digital HD code to redeem.  The sentiment of the film still resonates and is as poignant today as it was back in 1947, maybe even more so.

Doris Walker (Maureen O'Hara; The Quiet Man) is a single mom who works at Macy's department store, specifically on the Thanksgiving Day Parade.  When her Santa Clause ends up drunk she must find a last minute replacement and luckily she crosses paths with Kris Kringle (Edmund Gwenn; The Trouble with Harry) who becomes a wonderful Santa Clause.  Doris then hires Kris to work at the department store was their seasonal Santa.  However, things become a little sticky as he starts directing customers to competitors' stores and then things escalate when he claims to be the real Santa Clause.

A seemingly harmless old man, Kris stays with Doris' neighbor, Fred Gailey (John Payne; The Restless Gun).  However, when Macy's Psychologist calls Kris crazy, Kris assaults him causing the police to send Kris to a mental institution.  When Kris goes on trial for mental competency, Fred, a lawyer, defends him trying to prove he is the real Santa Clause, ultimately (spoiler alert) winning the case.   While all this is going on Kris spends time with Doris's daughter, Susan (Natalie Wood, West Side Story) who, thanks to her mother is a jaded little girl who doesn't believe in fairy tales, magic, and Santa Clause.  As the movie comes to an end, Susan gets her wish, Doris and Fred get each other and everyone questions whether or not Kris Kringle really IS Santa Clause.

This wonderful movie is made all the more special by an outstanding cast.  O'Hara and Payne are well cast and delightful.  Gwenn is so special that he makes us all believe he truly could be the real Santa Clause.  Wood is exceptionally strong for a child actor and her talent was obvious even back then.  Casting can sometimes make a movie great and this is a perfect example of that fact.  With a good script and the right actors, a film can be a moving, magical experience and Miracle on 34th street definitely is such a movie.

The Blu-ray is presented in 1080p quality, which is standard for Blu-rays these days.  The video transfer comes across nicely although not completely clean but I can't imagine it would with a film this old.  The DTS-HD Master Audio 5.1 is also strong considering the 1947 movie was recorded in mono.  The dialogue fills the speakers but obviously, there is no differentiation between vocals and effects.  The combo pack offers the same extras as previous releases including Audio Commentary by Maureen O'Hara, Hollywood Backstories, Fox Movietonews: Hollywood Spotlight, Macy's Thanksgiving Day Parade: Floating in History, Promotional Short, and Poster Gallery.  Of course, this version does include the Digital Download, which is new.

With all the violence, action and horror movie audiences face these days, it is nice to come back to a heartwarming classic tale that stands the test of time.  My only complaint is that I wish it had been longer (not something I usually say in reviews).  I feel there could have been more character development, which I think would have only served to enhance the story more.  I also wonder if the Doris character was considered scandalous back in 1947 since being a divorced woman back then was not as widely accepted as it is today.

Regardless, this is a classic film that should be watched every year at the holidays so if you don't already own it... here is your chance.