STEP documents the senior year of a girls’ high-school step dance team against the background of inner-city Baltimore. As each one tries to become the first in their families to attend college, the girls strive to make their dancing a success against the backdrop of social unrest in the troubled city.

Download Step in Digital HD/4K from the iTunes store. 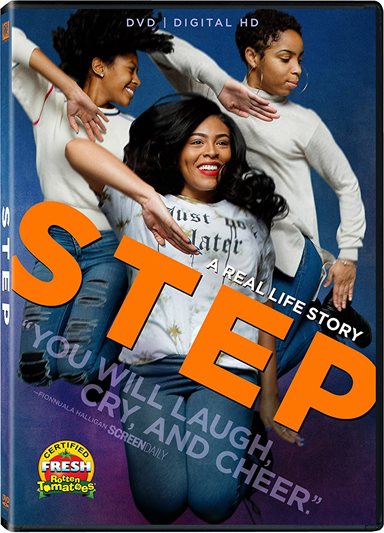 In 2009, the Baltimore Leadership School for Young Women opened its doors with 120 students.  A middle and high school charter school in inner-city Baltimore, it graduated its first class in 2016 with 60 young ladies (100 percent of the senior class) attending college.  The all-girls school also boasts a winning step team and in the 2015- 2016 academic year Director Amanda Lipitz followed three members of the senior class and step team as they navigated school work, the college application process, and practices for their most important competition.  Step is a heartfelt look at these ambitious young ladies as they strive to achieve their goals.

Blessin Giraldo is one of the seniors highlighted in the film.  She is a talented stepper who has a great sense of rhythm and a creative mind.  She also comes from a less than ideal home life (as many of these girls do) and missed school 53 days in her junior year alone. Subsequently, her grades have suffered and the lack of support and seeming disinterest at home only add fuel to the fire.  Now faced with senior year and limited college options, she is determined to turn things around to prove she can get the grades, graduate and go on to college.

Cori Granger is a solid student who has plans to head to college.  She is shyer than some of the other steppers but enjoys the work and the team.  She is raised by her single, corrections officer mom who doesn't mess around.  She ends up enrolling at Alabama A&M University.

Tayla Solomon is the brightest in the group and is on a trajectory to be the school's first valedictorian.  She dreams of attending Johns Hopkins University close to home but isn't sure she will get nor if she can afford to go there.  As the oldest of six kids, there isn't always money for the basics (including electricity), let alone an expensive private school.  She not only gets accepted to Hopkins and other schools, she is also offered a full-tuition scholarship and ends up at her dream school in the fall.

The gem of this documentary are the young ladies.  Each is bright and articulate but so different in almost every aspect.  They have a bond of step team that ties them together but, of course, some drama does rear its ugly head part way through the year.  We see Blessin's and Cori's grades slip and Tayla worry about affording college.  They fight amongst themselves which threatens the cohesiveness of the team as they try to win a championship.

However, thanks to Lipitz's artful direction we become invested in these ladies and root for them not only in the step competition but in life as well.  We hope to see them succeed and when the scene arises and we watch them graduate I, for one, found myself holding back tears right along with their families, teachers and step team coach.  The year flows seamlessly, from the beginning to their step competition and their cap and gown ceremony.  Luckily, Lipitz ends with a follow up of where the ladies are in 2017 giving the viewer a sense of closure.

This is a realistic look at life as a teenage girl in inner-city Baltimore and the challenges they face.  It also looks at the remarkable school they are privileged enough to attend.  It is heartwarming and uplifting and makes you root for the Lethal Ladies from start to finish.