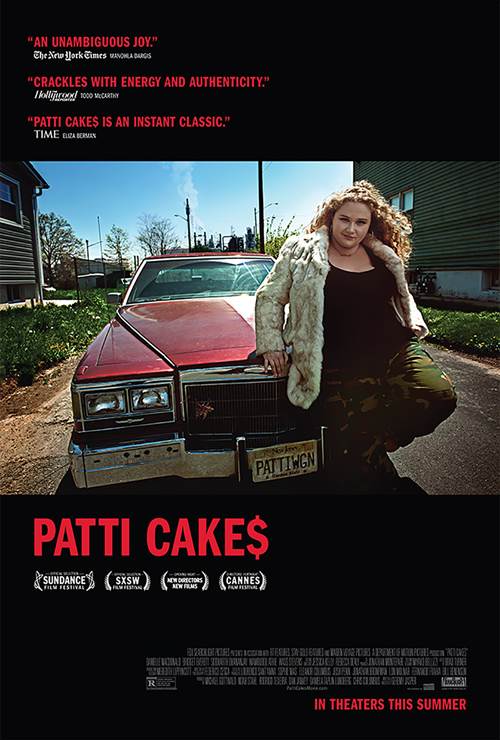 In a coming-of-age story straight out of Jersey, an unlikely rapper finds her voice as a one-of-a-kind hip-hop legend in the making in PATTI CAKE$, the first feature film from acclaimed commercial and music-video director Geremy Jasper. Set in gritty strip-mall suburbia, PATTI CAKE$ chronicles an underdog’s quest for fame and glory with humor, raw energy and some unforgettable beats.

Stream Patti Cake$ in Digital HD/4K from the AppleTV store. 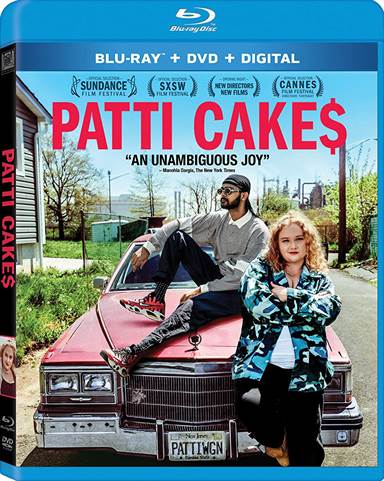 Patti Cakes, Patti Cakes, bakers…this isn't that kind of movie.  When one hears the term "patty cake", we generally think of the beloved children's game and hear that song running through our head.  In this case, Patti Cake$ takes on a whole new meaning as it is a nickname Patricia Dombrowski's (Danielle Macdonald; Every Secret Thing) Nana (Cathy Moriarty; Kindergarten Cop) calls her as a term of affection.  The film of the same name is a heartwarming, true underdog story about an unlikely rap artist and her friends.

Patti is an overweight, white girl in her twenties who lives with her Nana and her mother Barb (Bridget Everett; Trainwreck) in northern New Jersey.  She works part-time at a local dive bar whose patrons are mainly over the age of fifty and who likely sit around reminiscing about the "good old days".  However, Patti has big dreams about one day becoming a famous rapper and meeting her idol, "Oz".  She also helps pay medical expenses for her Nana who is dying while Barb lives like she is still Patti's age and on the verge of breaking into her own music career.

Forced with the necessity to earn more money as medical bills pile up, Patti takes on a second job with a caterer and moonlights as the rapper "Killa P".  Along with her friend Jheri (Siddharth Dhananjay) and he new acquaintance Basterd (Mamoudou Athie; The Get Down), they form the group PBNJ (the N is Nana who amidst a Percocet haze contributes some vocals to their debut track).  They get a local gig but when Patti meets and raps for her idol Oz and he shoots her down she suddenly gives up on becoming a rapper.  However, the group finds out they are set to compete in a rap competition and set their sights on winning.  In the end, they win over the audience which is a level of success all it' sown.

Macdonald was perfect casting.  She seems a natural with a mic in her hand despite the fact that she had never rapped before preparing for this movie.  Moriarty shows she still has comedic timing as the loving but snarky Nana.  Dhananjay and Athie are both solid contributors to the movie as well.  However, the stand out is Everett.  She demands to be watched every time she is on the screen and her commanding presence makes Barb seem to still be relevant, even as she settles nicely into middle age.

The Blu-ray is presented in 1080p high definition video and even though the picture is clear and clean the scenes tend to be purposefully dark and dirty looking.  In contrast, there are moments that sunlight permeates the screen and colors pop nicely.  The DTS-HD Master Audio 5.1 is necessary to showcase an eclectic mix of original music and 80"s pop hits.  The beats envelop the viewer from all sides as the lyrics and dialogue sit comfortably in the center channel.

The combo pack has six extras.  The Gallery and director's commentary are pretty standard and the music videos are to be expected.  The other two features, A slice of Cake$ and the promotional featurettes, are rather interesting and informative taking a look at Danielle, her talent and the production as a whole.

An unlikely concept, the film engages the viewer on many different levels.  One feels sympathetic to Patti's life, pities Barb and roots for the underdog all at the same time.  The music deservedly is showcased without being obnoxious and is its own character subtly supporting the cast while remaining in the background.

Not overly long, the film is entertaining with the help of terrific characters.  An underdog itself, it fights its way to the top to be among the contenders.