Win a Digital Copy of MINIONS: THE RISE OF GRU 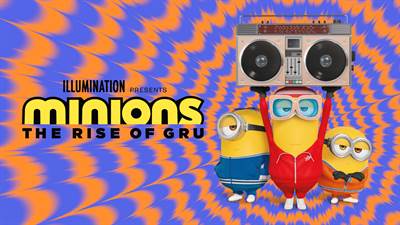 Let's face it, whether they annoy you or not, you have to admit they are really cute and even sometimes funny.   Of course, "they" are none other than those yellow, overalls-wearing, mischievous makers - the Minions.  This summer they returned to theaters with MINIONS: THE RISE OF GRU with a look at how they helped an 11-year-old Gru become the supervillain he was always meant to be.

In anticipation of the Digital release on August 30, 2022,  Universal Pictures, in conjunction with FlickDirect, want to give some lucky individuals the chance to win a digital code to watch MINIONS: THE RISE OF GRU.

To enter for a chance to win one Digital code for MINIONS: THE RISE OF GRU follow these two easy steps:

Long before he becomes the master of evil, Gru is just a 12-year-old boy in 1970s suburbia, plotting to take over the world from his basement. When the infamous supervillain group, the Vicious 6, ousts their leader, Gru attempts to join their ranks but soon finds himself the mortal enemy of the apex of evil. With Gru on the run, the Minions attempt to learn martial arts to help save him, and Gru discovers that even bad guys need a little help from their friends. Packed with the franchise's signature subversive humor, MINIONS: THE RISE OF GRU features more thrilling action than any Despicable Me film ever before!

NO PURCHASE NECESSARY. This film is rated PG. Must be 13 years of age or older to win. Employees of all promotional partners and their agencies are not eligible. Void where prohibited. If an email is received without subscribing to the FlickDirect YouTube Channel, the entry will be voided, and the email deleted.  Entries must be received by 11:59 pm on September 1, 2022, to be eligible. The winners will be contacted via e-mail in order to receive their Digital code.   Sponsors are not responsible for incomplete, lost, late,  or misdirected entries or for failure to receive entries due to transmission or technical failures of any kind.