Netflix offers a rather interesting and fairly comprehensive look at the world of video games with its global socialization, culture, competitiveness...and profitability. 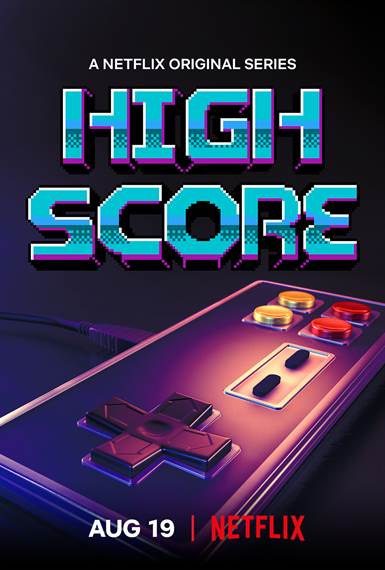 If you look up the definition of a video game you would find the following: a game played by electronically manipulating images produced by a computer program on a television screen or other display screen. At its most basic form, that is all it is.  However, when you delve into the history behind video games, there is so much more than meets the eye.  Netflix original docuseries, High Score, attempts to do just that in six, forty-minute episodes.

Described as the following, the docuseries takes us behind the origins of an ever-expanding business:

High Score is a documentary series about the golden age of video games when legends – from Pac-Man to Doom – were brought to life. Through ingenuity and sheer force of will, computer pioneers and visionary artists from around the globe spawned the iconic worlds of Space Invaders, Final Fantasy, Street Fighter II, Mortal Kombat, Sonic the Hedgehog, Madden NFL, and beyond. Without rules or roadmaps, players and innovators alike pushed the limits of money to be made, rivals to be crushed, and hearts to be won. This is the story of the brains behind the pixels and how their unmatched innovation built a multi-billion dollar industry – almost by accident.

From the opening credits, the series will either take the viewer down memory lane or introduce them to the crude beginnings of the high definition, incredibly intricate games they play today - depending on one's age.  In less than 50 seconds, the intro scrolls through over probably two dozen arcade/video games from the past.

In the 1970s and '80s arcade games became the newest entertainment vehicles for the under twenty set but that was only the begging.  The industry really exploded when the home console (with interchangeable game cartridges) became popular and at least half the houses in America owned an Atari machine.  The growth continued over time with better graphics, portable devices, and adventure games that required thought and strategy.

Narrated by Charles Martinet (or as Nintendo fans know him – the voice of Super Mario), the series also highlights the "war" between video gaming giants Nintendo and Sega, the homes of Super Mario and Sonic the Hedgehog, respectively.  A former Sega America executive even takes the audience through the strategy that was created in order to hopefully take down the (at the time) undisputed champion of the home gaming console market.  For an industry that was founded almost by accident, it documents how its humble beginnings grew into the competitive, gaming market of today.

While it is fascinating to see how far the technology has come in less than fifty years, for me, the series lacked one thing.  It barely touches upon the current, digital graphics world and the oddly social aspects of computer gaming today.  From the very solitary surroundings of one's room (or perhaps basement), online gaming allows multitudes of people "meet" and play together in these virtual worlds – a quality that has become even more important in the last few months as we navigate an international pandemic.

Netflix offers a rather interesting and fairly comprehensive look at the world of video games with its global socialization, culture, competitiveness (both by players and by the various companies in the industry), and profitability.  It's fascinated to see the combination of the engineers and business people and their respective views of the industry.  Since there aren't many documentaries about this subject matter, it should have an audience from gamers and laypeople alike.  I don't particularly like video games (never have), but even I found this history lesson interesting.

Check out High Score on Netflix beginning on August 19, 2020.