These Violent Delights Have Violent Ends 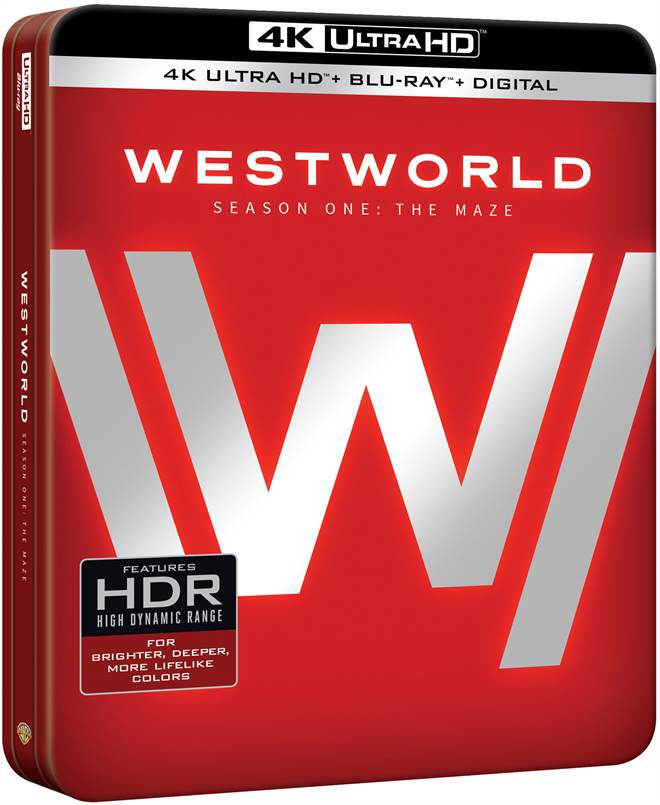 Purchase   DVD/Blu-ray/4K UHD
Westworld, HBO's science fiction series based on the 1973 Michael Crichton (Jurassic Park) film of the same name, has taken viewers into a world where anything you desire can be yours. If you haven't had a chance to catch Season One, now's your chance. Available on 4K Ultra HD Blu-ray, Westworld promises a ride you will never forget.

Westworld is run by Dr. Robert Ford (Anthony Hopkins; Thor: Ragnarok), who, along with partner Bernard Lowe (Jeffrey Wright; The Hunger Games) have created a theme park where you can have your every wish and desire come to life and live out your fantasies in the days of the Old West. The lifelike animatronics are there to cater to your needs, and there are no limits to what you can do. However, at some point, even those with artificial intelligence begin to see that they aren't treated fairly and, as we know from other tales of AI rising up, sometimes the things we create for our convenience/pleasure can turn out to be our downfall.

The world of Westworld is populated by an array of very complex characters including a frontier woman Dolores Abernathy (Evan Rachel Wood; Once and Again), a ruthless man in black (Ed Harris; Run All Night), a madame that is more than meets the eye (Thandie Newton; Mission Impossible 2), and a  "new to town" settler (James Marsden; X-men).

With the reimagining of this property, producers Jonathan Nolan and Lisa Joy have tried to answer the age-old question, "What makes us human?". They have wrapped this high power concept into a show fraught with corporate greed/espionage, rogue robots and corrupt humans that all takes place in a futuristic world which contains what amounts to a sick/twisted adult Disney Frontierland-like theme park.

To coin a phrase from another high profile, Michael Crichton property, Westworld and its creator's "spared no expense" when recreating this property for the small screen. Shot on 35mm film, Westworld offers sets that you would normally see on a large scale Hollywood film. The frontier sets look like they are real and not just built quickly for a television production, while the interior hallways of the corporation follow the same architecture that one might find at a high-end Apple store. The score, produced by Ramin Djawadi (Game of Thrones), is hauntingly eerie and at the same time energetic at just the right moments creating a sense of unease while watching the series. But the real arenas where Westworld is at the top of their game is their cast and the script. With the combination of Jonathan Nolan, Hopkins, Harris, Wood, and Marsden, one would hope you would get a superbly acting and scripted show, but the truth is even better than that. With the combination of the amazing script by Nolan and the actors, you get probably one of the best-scripted shows to ever be put on television. The story is smart and evenly paced, while the actors truly make you believe you are a visitor to this amazing world.

4K UHD film releases are now pretty much the norm when a film is coming to the home entertainment market these days. However, Westworld Season 1 is the first time ever a tv show has been released on this new high definition platform, and Warner Bros even went the extra mile and added Dolby Vision to its remastering of the series. To put it mildly, the show looks amazing. The 2160p 1.78:1 aspect ratio of Westworld is a truly demo worth picture. The Westworld park literally jumps off the television and you feel like you are truly immersed in the show. Details are sharp and crisp, while blacks are spot on, and the HDR color spectrum with the combination of Dolby Vision is so lifelike you really feel like your television is a window to another world.

The first season of Westworld already had a top-notch DTS-HD MA 5.1 soundtrack that I dare say sounded better than most films these days, but the addition of the Dolby Atmos soundtrack puts Westworld's audio presentation on another level. The addition of the height tracks provides great spacial depth to the presentation, making you feel like you are actually in a saloon or on the frontier.

The Westworld: Season One 4K Ultra HD Combo pack includes an Ultraviolet digital copy of the show, a collectible metal tin, a booklet, as well as some amazing extras that span across the three discs in the package. Some of these extras are apart from the digital release of the show with Imagining the Main Title, Realize the Dream: The First Week on the Set of Westworld, The Key to the Chords, and the Gag Reel being the only new additions. A complete breakout of the special features is as follows:

4K UHD Disc One
4K UHD Disc Two
4K UHD Disc Three
With Westworld, Jonathan Nolan and Lisa Joy have created one of the greatest cinematic pieces to ever grace the television screen, providing more questions than answers about the age-old concept of being alive. One can only hope that Season 2 is up to the same pedigree when it comes out in 2018.

For more information about Westworld visit the FlickDirect Movie Database. This release has been provided to FlickDirect for review purposes. For more reviews by Nathan M Rose please click here.

Maureen Buccellato
While Westword Season two was not at the same groundbreaking level the first season was (fairly, few are),  it still is one of the best series on television
Full Review | Grade: A

Nathan M Rose
Having been a Westworld fan since its premiere episode I do have to say, while season one and two were very good, season three blows those two out of the water.
Full Review | Grade: A