Welles not only did an amazing job as an actor, but he was an extraordinary writer. 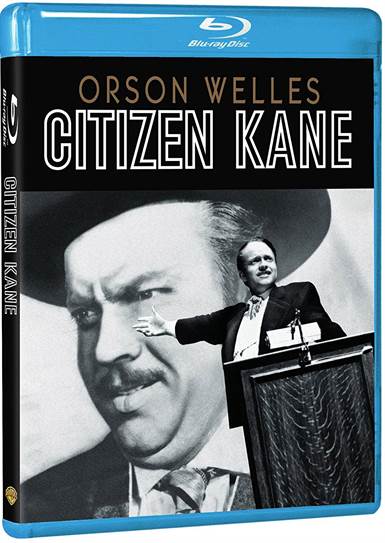 Purchase   DVD/Blu-ray/4K UHD
Citizen Kane is not just Citizen Kane.  It is Orson Welles' Citizen Kane (1941).  A classic movie in which a great man dies and leaves behind a mystery with his last dying word, "Rosebud", and no one can let it rest with the deceased man.  Who is Rosebud? The greatest mystery of all movies must be solved and that is what Citizen Kane is supposed to center around.  News reporter Mr. Thompson (William Alland) decides that he must decode the last dying word of this enigma of a man.

But like all great movies, the story is so much more than what appears on the surface.  It's almost as if the proverb "Don't judge a book by it's cover" was made in direct correlation to Citizen Kane.  It's not a story about "who is Rosebud", but a prophetic story about one man's life - his passions, his loves, his desires, his hatred.  It's about his soul and his heart and his mind.  They just don't make movies like Citizen Kane anymore.

Charles Foster Kane is dead in the opening scenes of Citizen Kane, with his funeral being large and ornate.  A scene later, Kane is represented as a Communist- a fascist- one so much an enemy of the Government, that a huge rally is held in Union Square condemning him.  His life is put on exhibition; from his humble beginnings, through his marriages, affairs, to failing political race, until we finally are introduced to Charles Kane as a child and then a man owning 42,000 shares of Public Transit and the owner of the The New York Inquirer, losing a million dollars a year, which does not seem to be any concern of Mr. Kane's.

As stated above, this is simply not a movie title.  Orson Welles is Charles Kane.  Between his smooth dialogue and impeccable acting, Orson Welles owns his character.  No leading man from 1941 could have done as well as a job as Welles nor have made Charles Kane such as prolific character.  His sidekick, Mr. Bernstein was played by the famous Everett Sloan, who brought the much-needed seriousness as an older Bernstein, showing the evolution of the man who was hilarious when he was younger and working for Kane.  Bernstein provides the background information to Thompson of the early days of The New York Enquirer, but could not shed light on the identity of Rosebud.

Prior to Bernstein, Thompson finds Mr. Thatcher's (George Coulouris) memoirs.  Thatcher was Kane's childhood guardian and financial advisor.  Thompson reads Kane's start in Colorado as a poor child, until his parents found gold.  Kane's mother sent him to live with Thatcher to (assumingly) get the child Charles away from what could be interpreted as an abusive father.  While Charles' parents are arguing whether to send him with Thatcher or not, Charles is outside playing on his sled, in the snow.  The audience sees how much Charles doesn't want to go with Thatcher, but Charles' mother wins and off they go.

After interviewing Bernstein, Thompson's next interview is Kane's best friend- Jedediah Leland, played brilliantly by Joseph Cotton.  Leland also went on to work for Kane as a drama critic.  Leland continues Bernstein's tale describing the misery Kane found in his marriage, the chance meeting of his second wife, and the disaster that struck down any hope of Kane's political career.

The story continues about Kane's second marriage to songbird Susan Alexander (Dorothy Comingore), his ambitions for her singing career, and their eventual move to Florida, where Kane builds an ostentatious mansion, purportedly for Susan, and names it Xanadu.  Despite a golf course, zoo, man-made mountain, and the mansion, the 49,000-acre property was no home to Susan, as she longed to be back in New York.

Finally, it is Susan's chance to tell her story.  She has aged and she recounts her operatic singing lessons and the magnitude of support Kane had for her and her talent, more so than she professionally deserved.   It is clear that while Kane was established in his life during their marriage, Susan had not yet grown up and longed for the freedom that she had in New York.  Cinematography showed their separation despite being married, as they spoke to each other miles apart, in rooms barely furnished, except with statues, in the massive mansion.   She continues to recount her true loneliness. "You don't love me- you want me to love you" she states to Kane.  When Susan finally leaves to go back to New York, Kane tries to make things right but he puts his foot in his mouth. He tells Susan "You can't do this to me".  His final words to her push her out of the mansion.

Susan sends Thompson to speak with Kane's butler, Raymond (Paul Stewart), who first wants to know if the meaning of Rosebud is worth $1,000.00.  Raymond starts his take with Susan leaving and how Kane starts destroying her room.  Kane stops when he finds the snow globe, which is the same snow globe seen in the opening scene smashing to the ground from the dying man's hand.  When Kane pockets the snow globe, the butler hears Kane utter the word "Rosebud" but cannot shed light as to whom Rosebud may have been.  Was Kane destroying the room because he was upset that Susan left or because she didn't stay when he asked her to stay?  Was the snow globe a token of their love?  The story comes full circle at the end and it's realized that Rosebud was not the only mystery.

Reporters begin to leave Xanadu's hall after the funeral.  The mansion is full of packing crates and belongings, reminiscent of a home with no occupant and the reporter's start talking about a man's worth based upon his possessions.  Thompson is explaining to everyone that he was never able to ascertain the identity of Rosebud and dismisses his failure of unraveling the mystery by saying the famous words "I don't think any word can explain a man's life".  The camera pans out and then focuses onto all the crates and possessions stored for categorization.  As the camera pans on the sled that Kane played with in the snow (the day his parents gave him to Thatcher) the word ‘Rosebud" is etched onto the sled.  No one else sees it and the sled is thrown into fire, to be destroyed, much like the snow globe when it crashed to the floor.

Unlike modern day movies and their bonus features, the bonus features provided with Citizen Kane really captivate the audience.  To see stills, hear radio ads, and watch actors just being themselves is refreshing.

The Blu-ray is presented in 1080p resolution. The quality of the black and white film is utterly amazing.  The lines are crisp and clear and clean.  There is no blurriness that is usually present in the older films.  You can see the exact knot in the men's ties and the sparkle in the women's jewelry.  The audio is DTS-HD Master Audio English 1.0.  There is no crackling to be heard and the sound quality is as good, if not better, than an IMAX theater sound system.

Citizen Kane is not simply a movie about Kane and his life.  It is about his emotional psyche, where he came from, and where he ended up.  Everything comes full circle –love, Rosebud, and the snow globe.  Welles not only did an amazing job as an actor, but he was an extraordinary writer.   The film industry will not see the likes of a film with such deep meaning as Citizen Kane for a very long time.

For more information about Citizen Kane visit the FlickDirect Movie Database. This release has been provided to FlickDirect for review purposes. For more reviews by Jennifer Broderick please click here. 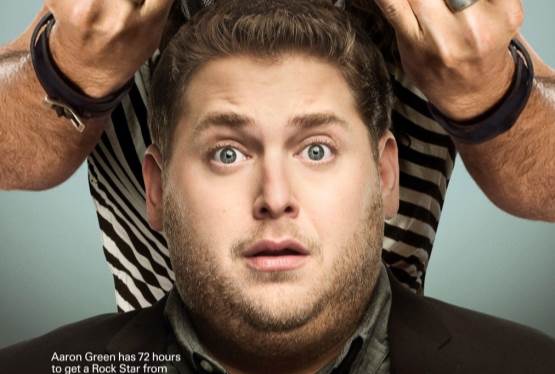 Get Him To The Greek