Moonlight is a must see. The background gained from the insight provided in the Bonus features is unbelievable. The cast could not have been chosen better. 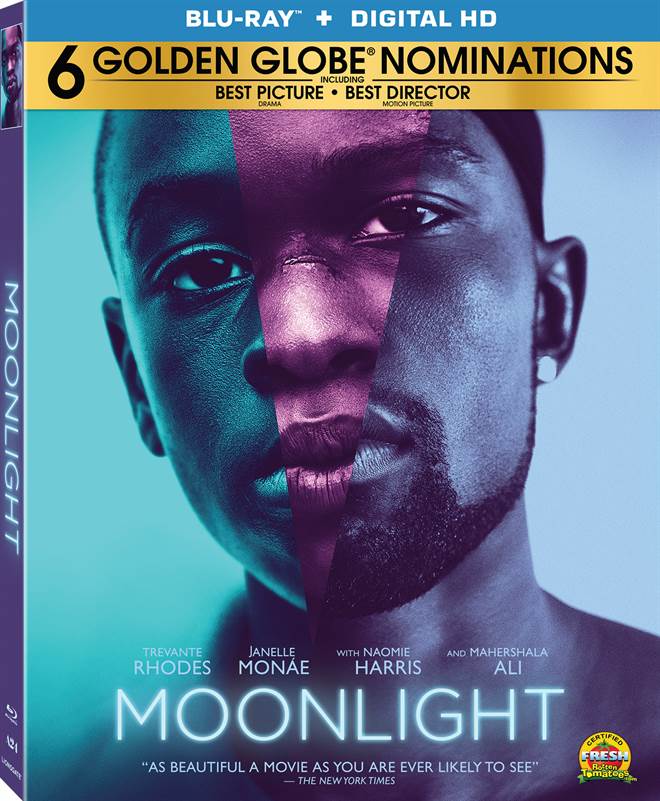 Purchase   DVD/Blu-ray/4K UHD
It's rare that one gets to watch a movie about self-discovery but Lionsgate and A24 have released a movie that when you watch it, provides a profound sense of oneself and understanding of what it takes to mold a person from childhood to adulthood.   Director Barry Jenkins (Medicine for Melancholy) has taken a story and transformed it into something that captivates the audience into finally realizing what human emotions are to a young boy struggling with identity and just trying to find out who he is.

Moonlight is an amazing movie chronicling the life of a young black man who is grown up in one of the rougher areas of Miami- Liberty City.  based on Tarel Alvin McCraney, Moonlight focuses on three distinct periods of the young boys life- child, teen, and young adulthood.  It's an intriguing movie to watch about a subject that just seems to roll across the floor smoothly as you watch.

Trevante Rhodes (Westworld) plays adult Chiron, a young, black, gay man in Miami.   He is simply looking for love.  Rhodes portrays this role with sensitivity and realism.  His emotions are apparent and natural.  Through Rhodes' performance, the audience can connect with Chiron on many levels as a person underneath all the labels of male, black, and gay.

Mahershala Ali (Free State of Jones) plays Juan, the man who first pays attention to Chiron.  Ali brings you straight into the movie from his first scene when he saves Chiron from other boys tormenting him.  Ali provides the stable father figure in the film that everyone can relate to. He allows Chiron -from the moment he meets him- to find himself, to come to terms with his struggling identity on his own terms knowing that there will be someone there if he falls.

Janelle Monae (Hidden Figures) plays Theresa, Juan's girlfriend.  She feeds Chiron in more way than just food.  She steps in as a mother figure when Chiron's mother either can't or won't.  Monae's performance is outstanding.  Through her acting, she portrays a caring, stable, and tender woman, helping a young boy come to terms with who he is without the judgment he clearly gets from his mother.

The movie is presented in 1080p High Definition, 16 x 9 Widescreen with an aspect ratio of 2.39:1.  The picture quality is clear and the essence of the Miami neighborhood comes through they way it is in real life.  Colors are vibrant and enticing.

Audio is presented in English 5.1 DTS-HD Master Audio.  While this is usually a perfect mix of music and dialogue, I did find myself having to adjust the volume- down when a train passed and up when Chiron was having a confrontation with a bully from school in the middle of the street, and therefore, it was a bit distracting.  The background music was subtle and supportive of the storyline and dialogue.

Bonus features are always a reason to explore the Blu-ray and Moonlight does not fail in that respect.  Bonus features included are:

Moonlight, with 6 Golden Globe Nominations, including one for Best Picture and Best Director, is a must see.  The background gained from the insight provided in the Bonus features is unbelievable.  The cast could not have been chosen better.

Running Time: 111 minutes
Distributed By: A24

For more information about Moonlight visit the FlickDirect Movie Database. This release has been provided to FlickDirect for review purposes. For more reviews by Jennifer Broderick please click here.

Moonlight images are © A24. All Rights Reserved.