Black Sails brought sex, violence, pirates, and a rich history to our homes for fours years. While not a show for the entire family, adults in the house who have never seen Black Sails are missing out on an epic story. 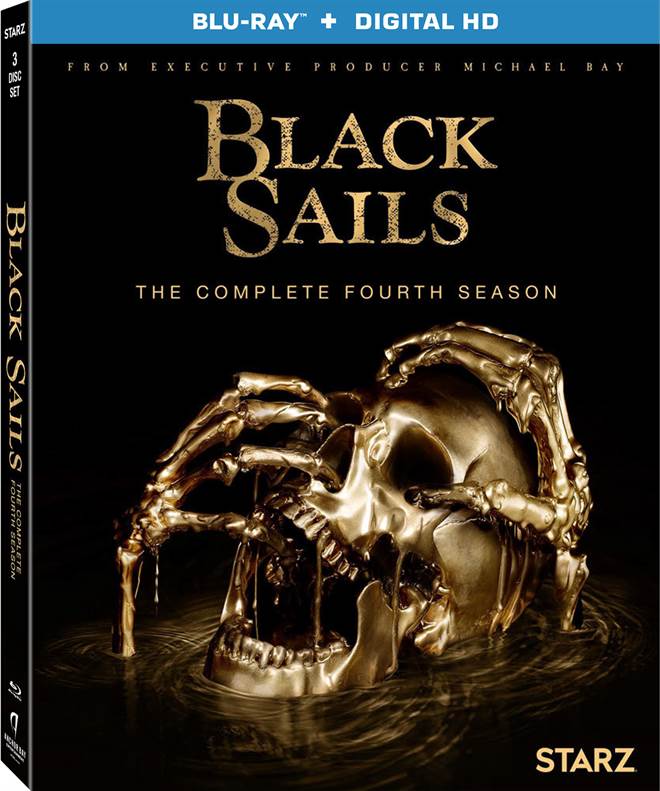 Purchase   DVD/Blu-ray/4K UHD
Geoffrey Chaucer is attributed with coining the phrase "All good things must come to an end" and with Black Sails, that is sadly true. Starz aired its fourth and final season- of this epic story this past season and The Complete Fourth Season is available on Blu-ray for purchase.

Much aligned with Starz' penchant for airing wonderfully enjoyable mature content, Black Sails brought sex, violence, pirates, and a rich history to our homes for fours years. While not a show for the entire family, adults in the house who have never seen Black Sails are missing out on an epic story. Black Sails navigates the final season like none other- it seems to be the best season yet and definitely one of the strongest seasons of all of the Starz shows, to date. Instead of just focusing on old characters and prior storylines, Black Sails introduces us to new faces, such as Israel Hands (David Wilmot; The Tudors), who is an ally to the infamous Blackbeard. While finding Long John Silver (Luke Arnold; The Tunnel) a prospective "treasure", his newfound loyalty to Silver colors much of Season Four, pushing Silver to limits much needed. One of the most beloved lines in the season is when Hands accuses Silver of not making up his mind- "You don't know? Why should I … follow you if you don't know? Why would anyone?" The interaction between the two strikes at the heart- Hands makes it known that he will not be a babysitter or a friend- but he will be loyal.

While the season finale sets us up for a Treasure Island storyline that can reasonably follow, the actors in Black Sails never lost steam the entire season. Actors are usually as good as the storyline- I have seen amazing actors fall flat on their face because the story was underdeveloped- but Season Four of Black Sails is on the opposite spectrum. In fact, Season Four was the best season ever in regards to the actors dynamic and the fact that the plot was better developed and engaging than prior seasons (I know- hard to believe Black Sails could get even better than the year before). The cast- actors, writers, directors, production crew- everyone involved- seemed to give everything they had to make this season the most powerful yet- leaving its fans rewarded for watching Black Sails throughout these past few years.

Black Sails is presented in 1080p High Definition with an aspect ratio of 1.78:1. There is no difference from the precise HD presentation that has been present for the three previous seasons - caked on blood and grime, homespun or elegant clothing, chiseled features of the actors is highly accurate and sharp. The depth with which the details are presented is magnificent. Blacks are inky and skin tones are natural. Honestly, the picture quality is supportive of the storyline - just like you will get caught up in the plot, you will get caught up in the realistic and detailed definition of the video presentation.

Audio is presented in 7.1 Dolby TrueHD. Sound quality is dynamic with concise dialogue and emotion heard throughout. Sound effects are clear and impressive without being overdone, such as cannons and gunfire. Waves heard are subtle and well placed, not taking over the scene when on the ship. The instrumental music in opening scenes and throughout is impressive. The background sound supports the storyline and immerses the viewer in their details.

The Blu-ray features many bonus features on Disc 3- all presented in 1080p HD, as well as a digital Ultraviolet copy of the series.

Fans around the world will surely miss a new season of Black Sails. What is wonderful is that no one will have to miss this past season. Black Sails: The Complete Fourth Season Blu-ray / Digital combo is a treasure to definitely claim.

For more information about Black Sails visit the FlickDirect Movie Database. This release has been provided to FlickDirect for review purposes. For more reviews by Jennifer Broderick please click here.