Unfortunately, the script is lackluster at best which makes the film more of a morose and morbid reminder of one of the worst wars in world history. 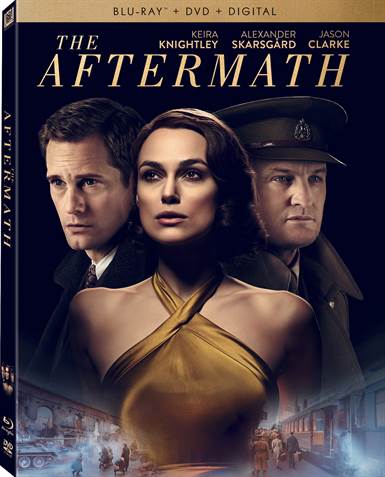 Purchase   DVD/Blu-ray/4K UHD
As with any war, there are always casualties with the effects of war can be long lasting even if they don't seem readily apparent.   On September 2, 1945, the Second World War (a.k.a World War II) ended.  German forces were defeated and Allied troops were sent in to keep the peace and help rebuild.  The British ended up in the hardest hit area, Hamburg, where total destruction was evident everywhere and anti-allied resentment remained.  The Aftermath, a new film from director James Kent (Testament of Youth), explores the impact war, as well as other life events, have on individuals and a Country.

Based on the 2013 novel by Rhidian Brook (The Killing of Butterfly Joe), The Aftermath tells the story of Rachel (Keira Knightley; The Imitation Game) and Lewis (Jason Clarke, Pet Sematary) Morgan.  Lewis is a Colonel in the British Army who is stationed in Hamburg.  In the winter of 1496, his wife Rachel joins him in a requisitioned mansion previously owned by Stefan Lubert (Alexander Skarsgard; The Legend of Tarzan). Since resources and housing are scarce, Lewis offers to let Lubert and his daughter Freda (Flora Li Thiemann; Nelly's Adventure) stay upstairs in the home, much to Rachel's chagrin.

Initially antagonistic towards the former homeowner and his offspring, Rachel eventually softens recognizing their mutual loss during the war - her son, Michael, and his wife.  As their relationship warms it eventually heats up to become a torrid affair.  When Lewis confronts Rachel regarding his suspicions about the affair she comes clean and tells him she is leaving with Stefan and Freda and proclaiming that their marriage had been over for a while, since Michael's death.  However, as they are getting on the train, Rachel realizes she can't leave Lewis and goes back to him before heading home to London.

This film represents a new level of excellence from Knightley.  I'm not sure if it is her costars, director or newly minted motherhood that helps bring out every nuanced emotion from her but this is one of her finest performances to date.  Clarke is also excellent as the caring yet stoic husband/military officer who can't seem to deal with the deal of his son while trying to be sympathetic to the Germans.  Skarsgard is a gentle giant who brings a stillness and a calmness to Stefan while still emoting a range of emotions.  The three together are a formidable team and are well cast.

The 1080p Blu-ray video quality and 1.85:1 aspect ratio make this film visually excellent.  The cinematography is spectacular and the high definition picture enhances the magnificent scenery as well as the devastatingly (digitally created) broken city of Hamburg.  The DTS-HD master audio 5.1 is a nice compliment to the video while the ambient noise offers a solid surround sound experience.  There are a few extras include with this combo pack including deleted scenes, VFX progressions of how they recreated a destroyed city of Hamburg, First look with behind the scenes footage and cast and crew interviews, Gallery and Audio commentary with Director James Kent.

With a cast this strong the movie should have been a masterfully produced period piece that evokes emotion from the viewer.  Unfortunately, the script is lackluster at best which makes the film more of a morose and morbid reminder of one of the worst wars in world history.  Even a romantic interlude between two actors who exude sparks every time they are near each other can save this movie.  With an interesting concept and moving performance from the actors, The Aftermath should have been more than the sum of its parts but ends up falling flat.

Purchase a DVD/Blu-ray/4K UHD physical copy of The Aftermath today at Amazon.com

Download The Aftermath in Digital HD/4K from the iTunes store.

For more information about The Aftermath visit the FlickDirect Movie Database. This release has been provided to FlickDirect for review purposes. For more reviews by Allison Rose please click here.

The Aftermath images are © Fox Searchlight Pictures. All Rights Reserved.