If you are of a younger generation you will relate to many of the pop culture references that Shaft (2019) provides. 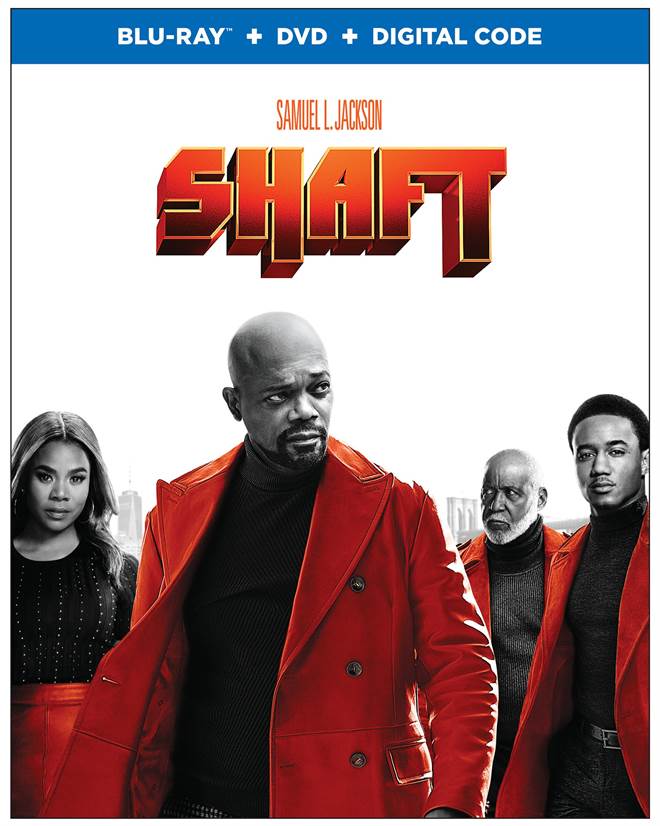 In the 1970's Richard Roundtree (Speed Racer) played streetwise private investigator, John Shaft.   After three feature films and a television series, Shaft was done.  In 2000, Samuel L. Jackson (Pulp Fiction) brought a sequel to theaters in the movie called Shaft.  He played John Shaft's son, also named John Shaft and he followed in his father's footsteps and became a PI As well.  This June another film called, you guessed it, Shaft was released continuing the saga with Jackson's character's son, JJ (Jesse T. Usher: Independence Day: Resurgence).  Now the movie that brings three generations together is being made available for purchase on Blu-ray, DVD and Digital HD.

In 1989, Shaft, his wife, Maya (Regina Hall; Girls Trip), and their son, John Shaft, Jr. or JJ survived an assassination attempt orchestrated by Pierro "Gordito" Carrera (Isaach De Bankole; Casino Royale) but Maya refused to have her son's life put in danger again so she divorced shaft and moved with JJ to the suburbs.  Now grown, JJ is an FBI Data analyst who finds out his childhood friend, Karim (Avan Jogia; Victorious), died of a heroin overdose.  Not believing that to be true, JJ tries to investigate but realizes he is in over his head.  With nowhere else to turn he goes to his estranged father, John Shaft, to ask for help.

Raised by Maya alone, JJ is not the street smart guy his father and grandfather are.  He also is a "by the book" kind of guy and doesn't agree with Shaft's violent tactics when questioning suspects.  Regardless, they try working together and, by following a money trail, father and son find out that Karim was going to blow the whistle on a drug smuggling operation which is why he was killed.  Of course, that trail leads back Gordito and just as he about to shoot JJ, Shaft jumps in front of the bullet, getting shot himself but saving his son.

The movie would have been completely different if Roundtree or Jackson refused to return to the franchise.  They are iconic as these characters and no one else could have played them more convincingly.  The addition of Usher makes this trio worth watching and Hall is always a treat, even when she plays the stereotypical woman ranting uncontrollably in a fit of rage.  Alexandra Shipp (Dark Phoenix), as JJ's other childhood friend (whom he secretly has a crush on) once again proves why she is one of young Hollywood up and coming actresses.

The combo pack includes the Blu-ray, DVD and Digital code.  The Blu-ray is the standard 1080p quality but offers some great visuals.  Details are sharp and clean and the colors are rich and true.  The Dolby Atmos audio is also very well done with dialogue, sound effects (think gunshots – lots of them) and soundtrack coming through the surround sound speakers nicely.  The Blu-ray has a few special features including Can Ya Dig It? The making of Shaft, A Complicated Man: The Shaft Legacy (broken into three parts: Part One: A Bad Mother Born, Part Two: No Questions Asked, and Part Three: A legend in His Time, Deleted Scenes, and Gag Reel.

While Shaft offers a talented cast, the script is lackluster at best.  It doesn't live up to the Shaft brand.  It is grasping at straws for a plot that doesn't quite deliver.  It does offer a few laughs and the feel is much more lighthearted than the previous movies.  Director Tim Story (Fantastic Four) tries to keep the pace moving but the story gets bogged down in too many details.

If you remember the original Shaft movies or even the 2000 version, you will experience a different film than you remember but if you are of a younger generation you will relate to many of the pop-cultural references the film provides.

For more information about Shaft visit the FlickDirect Movie Database. This release has been provided to FlickDirect for review purposes. For more reviews by Allison Rose please click here.

Joey R Mannon
Come for the comedy, stay for the action. Shaft is a film worth seeing.
Full Review | Grade: A