Home / Reviews / Scary Stories to Tell in the Dark

Scary Stories to Tell in the Dark Blu-ray Review

While these things may themselves sound like overused horror tropes, the creative team herein, have done an excellent job at keeping things fresh and altogether scary, doing justice to Schwartz’s beloved stories. 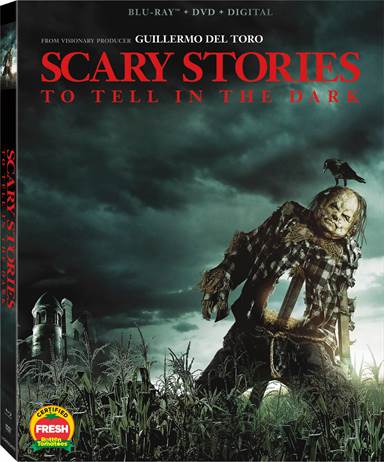 Purchase  DVD/Blu-ray/4K UHD
PG-13 horror movies, always conjure up images of milquetoast monsters, bloodless kill- scenes, and plots which cater to an, at best, immature audience. I know this seems like a seriously gross generalization, and perhaps it is a tad judgmental, but I have been to too many of them to think otherwise.

Or have I! This is not the case with Scary Stories to Tell in the Dark (SStTitD). Directed by Andre Ovredal (The Autopsy of Jane Doe), Produced by Guillermo del Toro (The Shape of Water) and released by Lionsgate, what we have here is a loving homage to the series of books written by Alvin Schwartz and published in 1981. The movie eschews an anthology format and creatively inserts the individual tales of horror, couched within the larger story. It does this deftly, and with a serious focus on the macabre, and even atmospheric and gory images. Ovredal has proven himself to be the right man for this type of storytelling, especially after watching The Autopsy of Jane Doe, and even, Troll Hunter. If you have not seen them yet, I suggest you do so, right away. He is fast becoming one of my new favorite directors.

In case you aren't familiar with this film:

It's 1968 in America. Change is blowing in the wind...but seemingly far removed from the unrest in the cities is the small town of Mill Valley where for generations, the shadow of the Bellows family has loomed large. It is in their mansion on the edge of town that Sarah, a young girl with horrible secrets, turned her tortured life into a series of scary stories, written in a book that has transcended time-stories that have a way of becoming all too real for a group of teenagers who discover Sarah's terrifying tome.

This movie wears its influences on its sleeves, even having our heroes evade the bullies, by running through a Drive-In, showing the ubiquitous, Night of the Living Dead.

It also features haunted houses, family curses, and nightmarish creatures, the likes of which no firearm can destroy. While these things may themselves sound like overused horror tropes, the creative team herein, have done an excellent job at keeping things fresh and altogether scary, doing justice to Schwartz's beloved stories.

The 4K disc is presented in 2160p High Definition video with a 2.39:1 aspect ratio.  The movie benefits from the upgrade in quality on the 4K.  The details are sharp and colors are deep and true,  The Dolby TrueHD 5.1 master offers a dynamic range that envelopes the audience and makes them jump.  The same extras are on both discs and includes Dark Tales, Retro Horror, The Bellows Construct, Creatures from the Shadows, Mood Reels, and  Behind the Scenes: Set Visits.

As horror films go this one keeps the audience engaged without relying simply on guts and gore.  These are well thought out stories and the movie offers more than just the average jump scares and a barely cohesive plot.  Ovredal does a lot with the source material to keep the audience on the edge of their seats.  I' not sure how well a sequel would fair but if they can capture the same feel as the original, then it could be promising.

Although difficult to imitate, the artwork of Stephen Gammell is the one thing seemingly underutilized, however, his nightmarish illustrations were well represented in spirit, rather than in obvious rendition, and Ovredal has done a fine job of keeping us on the edge of our seats.

If you are a horror movie fan, this is one worth purchasing.

Purchase a DVD/Blu-ray/4K UHD physical copy of Scary Stories to Tell in the Dark today at Amazon.com

Download Scary Stories to Tell in the Dark in Digital HD/4K from the iTunes store.

For more information about Scary Stories to Tell in the Dark visit the FlickDirect Movie Database.