Presley was born to be a performer and his portrayal of Danny in King Creole added more credibility to his acting career. 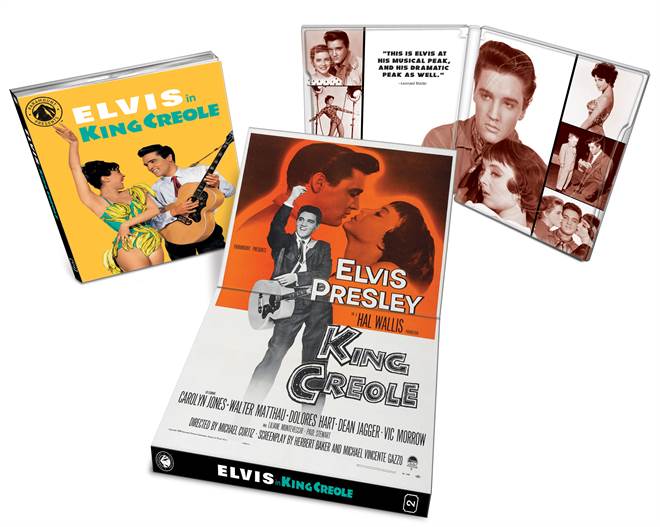 In 1953 Elvis Aron Presley (Jailhouse Rock) walked into a recording studio and cut two songs as a birthday gift for his mother. By 1956 he had a recording contract and was touring all over the country to the screams of adoring teenage girls.  His boyish good looks mixed with his "rockabilly" sound made him unique.  His outrageous pelvic thrusting dance motions made him controversial which only served to heighten his appeal. That same year he starred in his first feature film followed by several others over the years.  One movie, 1958's King Creole, earned Presley praise as an actor and is one of the first releases by Paramount Presents, a new initiative by Paramount Pictures to release some of their older films on Blu-ray.

Danny Fisher (Presley) was a young man whose life turned upside down three years earlier when his mother passed away. At nineteen he worked before and after school to help his father (Dean Jagger; White Christmas) and sister (Jan Shepard; Paradise, Hawaiian Style) pay the bills on their French Quarter apartment.  They moved there when Danny's father lost his job as a Pharmacist after the death of his wife. The day before his high school graduation, Danny punch one of the other students resulting in him being unable to graduate and requiring him to repeat his senior year.

Danny, however, decides to become a singer at the King Creole Club after the owner Charlie LeGrand (Paul Stewart; Citizen Kane) offers Danny an opportunity to sing at his club, much to the chagrin of Maxie Fields (Walter Matthau; The Odd Couple) a crooked night club owner who Danny used to work for.  As Danny garnered more and more success at the King Creole Club, Maxie became angrier and schemed up a plan to coerce Danny into working for him.  Sensing he has no other choice Danny signs Maxie's contract even though that is the last thing he wants to do.

Presley was born to be a performer and his portrayal of Danny added more credibility to his acting career.  Danny has layers and depth and Presley hits the right notes (pun intended) on all the various emotional journeys we see him take in this film.  I'm so used to seeing Matthau as an older actor in comedic roles that it's a little difficult for me to imagine him as the villain.  He does pull it off nicely though.  Carolyn Jones (The Addams Family) as an "escort" and Maxie's occasional punching bag is also terrific and she and Presley have some great scenes together.

At a time when studios were transitioning to technicolor, It's interesting that director Michael Curtiz (Casablanca) chose to film in black and white. As such the transfer to 1080p resolution is pretty decent with not too much noise and a sharpness that offers the audience a better visual experience.  The Dolby TrueHD 5.1 showcases the musical numbers beautifully though the mix between action/music and the dialogue wasn't always perfect.  The disc offers sing-along scenes that are not found in the extras but as part of the scene selection menu.  The only other extra is a 6-minute commentary by film critic Leonard Maltin.

While King Creole may not be Presley's most famous role it did quite a bit to solidify him as a bonafide actor.  The plot isn't anything unique or earth-shattering but the film is an enjoyable two hours.  The musical numbers aren't awkward or cheesy and are mostly there, I suspect, to please the legion of Elvis fans who I'm sure flocked to the movie theater to see King Creole at least once if not multiple times.

I'm glad Paramount Pictures decided to dig this one out of the vault and release it on Blu-ray as older fans will certainly enjoy the stroll down memory lane and younger audiences will get to experience "The King" in one of his better role.

For more information about King Creole visit the FlickDirect Movie Database. This release has been provided to FlickDirect for review purposes. For more reviews by Allison Rose please click here.