Last Train from Gun Hill is a good, old-fashioned, classic Western with an excellent cast and an interesting story. 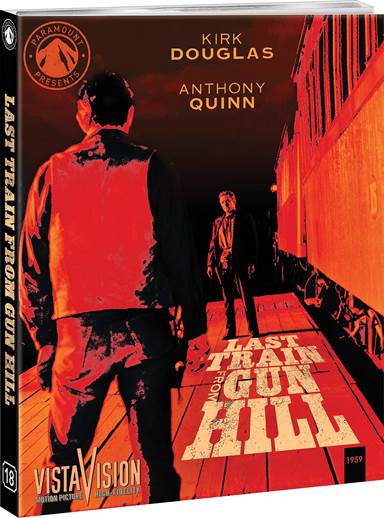 While the concept and development of the television set had been around since the early 1900s, it was considered a luxury item that didn't become a staple in homes everywhere until sometime in the late 1950's – early 1960's.   As a way to compete with the convenience of watching shows at home, Paramount Pictures engineers created VistaVision.  This new technology was a modified version of 35-millimeter film that offered higher resolution and widescreen viewing.  While White Christmas was the first Paramount movie to use VistaVision, their first movie shot entirely in this new process was Alfred Hitchcock's Vertigo.  As part of their ongoing series, Paramount Presents, another VistaVision film, Last Train from Gun Hill, has been released on Blu-ray.

Starring Kirk Douglas (Spartacus), Anthony Quinn (Zorba the Greek), and Carolyn Jones (The Addams Family), Last Train from Gun Hill is a traditional Western, complete with horses, gunslingers, a saloon, and a Marshall to keep law and order. It is this Marshall, Matt Morgan (Douglas), who comes to the town of Gun Hill to find justice after his wife was raped and murdered by someone working for Matt's old friend, Craig Belden (Quinn).  Unfortunately, Matt gets more than he bargained for when one of the men responsible turns out to be Craig's son, Rick (Earl Holliman; The Sons of Katie Elder).

Matt, finding a saddle belonging to Craig on one of the horses, returns it while trying to discover who killed his wife. Once he knows who they are, Matt apprehends one of the criminals, but as everyone in town "unofficially" works for Craig, they are unwilling to help Matt, including the Marshall of Gun Hill.  Having no choice, Matt rents a room at the hotel and handcuffs Rick to the bed.  Surrounded, Matt needs to figure out a plan to keep himself from getting killed, keeping the prisoner from escaping, and getting them both to the train station at 9 pm to take the last train out of Gun Hill.

Sometimes, with these restorations, the quality can be uneven or "hit or miss" depending on what shape the original negative is in and what format is used to restore the picture.  Last Train from Gun Hill is one of the exceptions as the quality is excellent.  This clarity could be attributed to two things. First, since the movie was shot in VistaVision it started with a "leg up".  Second, it got a 6K transfer, so details are clear and sharp, including the actors' facial features and the wind whipping the dirt upon Belden's ranch.

The Dolby TrueHD 2.0 mono audio doesn't fare quite as well as the video but is still an upgrade.  While the dialogue, effects, and soundtrack are balanced well, a mono track simply lacks the richness and robustness of multi-track audio.  The fire towards the end of the film along with the gunshots are clean and solid, if flat.

This Blu-ray release offers little in the way of extras which is disappointing but not unexpected since "extra features" is a relatively new concept.  Besides the Blu-ray and Digital download, the extras include original trailers, and Filmmaker Focus -- Leonard Maltin on Last Train from Gun Hill.  As with the other Paramount Presents releases, the packaging has a bi-fold cover sleeve with a reproduction of the original poster.

Last Train from Gun Hill is a good, old-fashioned, classic Western with an excellent cast and an interesting story and Paramount has done a wonderful job restoring it and presenting it on Blu-ray and Digital.  Whether you remember the movie or not or weren't alive when it was originally released, if you have a love of Westerns and/or older films or are a fan of Douglas and Quinn then this Blu-ray combo pack will be a treat.

Download Last Train from Gun Hill in Digital HD/4K from the iTunes store.