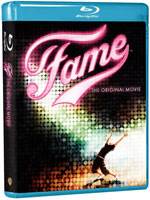 Purchase   DVD/Blu-ray/4K UHD
Considering that Frame was just re-made, this is a timely point for a Blu-Ray release of the 1980 hit musical because it is now an oldie classic.  Viewers who think they vaguely remember it will probably recall the spin-off TV show and the remake was certainly lighter-weight than the original.

The story centers on seven potentially great performers at a high school who are dedicated to the performing arts.  It takes place over a four-year period, as they are growing up, getting romantically involved, getting romantically hurt, getting potential auditions, and (in some cases) crashing and burning.  It is a musical that had several hit songs, and became #1 in England.

The film looks okay in Blu-Ray.  There is nothing here that really calls out for high definition.  The audio, all important for a musical, is far more impressive and the Blu-Ray clarity gives it good energy.  Overall though, if you wouldn't own it on DVD, there is little to force you to buy it on Blu-Ray.

There are some decent extras including the director's good commentary, interviews with the cast and crew that are okay, and a fair amount of behind the scenes footage.  If you are a fan of Fame, then you will probably find these extras are the best reason to own it.

I am not the target market for the movie, and I am not easily able to judge it as a musical; so I will let Billboard do that for me.  With the title track hitting #4 on the 1980's Billboard charts, it is hard to give this anything other than a good score.
Cast:
Directed By:
MPAA Rating: PG

For more information about Fame visit the FlickDirect Movie Database. This release has been provided to FlickDirect for review purposes. For more reviews by Marco Chacon please click here.