Heart pounding intensity with decent dialogue leads Fall down a path of recycled tropes that has thrills, a few scares, and some good acting. 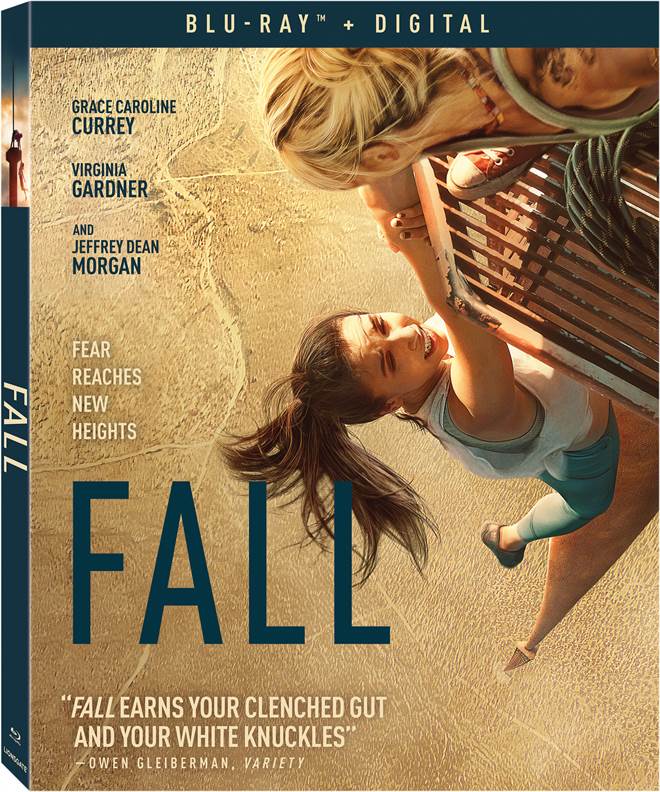 Are you an adrenaline junkie? Are you constantly looking for new, exciting ways to get your heart pumping and your pulse racing?  Do you enjoy driving extremely fast or jumping out of planes?  What about mountain climbing?  If any of this appeals to you, you will certainly want to catch Lionsgate's August theatrical release, Fall, coming out on Blu-ray on October 18, 2022.  With the drama unfolding on a platform 2000 feet above the desert floor, the suspense will keep audiences guessing and their blood pumping from beginning to end.

Becky (Grace Caroline Currey; Shazam!) and Hunter (Virginia Gardner; Halloween) are best friends who get their adrenaline rush from climbing tall structures - everything from mountains to old television towers.  However, When tragedy strikes and Becky's husband Dan (Mason Gooding; Scream) loses his footing and falls to his death, Becky can't seem to move on.  One year later Becky has isolated herself.  She is depressed and drinks too much and any time her father, James (Jeffrey Dean Morgan; Supernatural) tries to help she pushes him away.  When Hunter shows up at Becky's door and asks Becky to climb an old tv tower in the middle of the desert Becky initially says no but eventually relents. Of course, things go horribly wrong and the two ladies find themselves at the top of a 2000-foot tall tower with no way down.

Fall is a series of intense moments which makes the viewer tense up often with only small respites of calm here and there before the ominous music once again begins to build signaling more tension ahead.  Of course, none of the preparation and planning would have made much of a difference if the actors weren't able to play their roles with the necessary emotions.  Luckily, Surrey and Gardner were well cast and brought some genuine fear to the big (and now small) screen.   Both ladies have an intangible presence that not only makes them leap off the screen but also makes them terrific scene partners.

Lionsgate brings Fall to home video with a Blu-ray/digital download combo pack.  The video quality is 1080p resolution with a 2.00:1 aspect ratio which, in this case, seems to be both good and bad.  The picture has quite a bit of detail and the beautiful, wide-open expanse of the desert is fully captured. Unfortunately, there are moments that are meant to show the gravitas of the world below but, since those backgrounds were done on green screen, they look extremely fake and created with CGI.

The DTS-HD Master Audio 5.1 fares better than the video quality, giving ambient sounds plenty of depth.  The screeching vultures can be felt down to one's bones just like they rip through the flesh of a carcass.  The result is a multilayered, aural event that enhances the overall experience.  Unfortunately, the extras are minimal and don't offer much in the way of details but the making of does discuss rehearsals for the two leads and the trials of filming outdoors when bad weather comes through the area.  The extras are: Madison Beer I Have Never Felt So Alive from the feature film Fall, Fall: The Making Of, and the Theatrical Trailer.

Fall grabs the viewer from almost the beginning and doesn't let go until the very end.  Having said that, the dialogue can be clunky at times, the storyline becomes farfetched and ridiculous - nobody could have that much bad luck all at once -  and the big twist in the movie has been used before in other films.

Heart-pounding intensity with decent dialogue leads Fall down a path of recycled tropes that has thrills, a few scares, and some good acting.

Download Fall in Digital HD/4K from the iTunes store.

Listen to the Fall soundtrack on Apple Music.

For more information about Fall visit the FlickDirect Movie Database. This release has been provided to FlickDirect for review purposes. For more reviews by Allison Rose please click here.