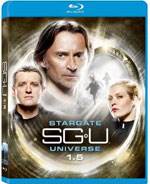 Purchase   DVD/Blu-ray/4K UHD
To resolve a debate posed between two minor characters in "Space", the first episode of this latter half of Stargate Universe's first season: yes, Colonel Young (Louis Ferreira, Shooter) is a murderer, though not so much a cold-blooded as a hot-blooded one.  I think, absent events to follow in "Space", he would be convicted of second-degree, not first-degree murder.  This unequivocally eliminates any sympathy I could possibly have for the colonel, which is unfortunate, because sympathy is already a commodity in short supply for this somewhat experimental entry in Syfy's long-running Stargate franchise.

It's increasingly clear from incidents like this, to me, that Wright, Cooper et al, the creative team behind the profoundly silly yet fun predecessors in the Stargate franchise, SG-1 and Atlantis, are new at the whole ‘serious show' game.  Stargate Universe is Syfy's transparent attempt to combine the critical success of its exceptionally serious and well-regarded Battlestar Galactica revival with its enduring Stargate fanbase.  Meanwhile, Warehouse 13 and Eureka have taken up the mantle of Syfy's lighter fare, traditionally Stargate's domain, so it falls to SGU, alongside its dangerously superior albeit low-rated Syfy companion Caprica, to take on storytelling challenges that the Wright/Cooper crew have never encountered before.

For a first foray into earnest space opera, the direction of this crew has been quite admirable.  They've chosen the very dangerous path of giving all their characters ambiguous morality, which is very difficult to pull off even for the most able of showrunners.  This sequence of ten episodes demonstrates the yield of experience committing the many mistakes to be found in the preceding ten episodes of the season, but there are still many bugs to work out, and considering that Syfy viewers have the alternative Caprica, there isn't yet much reason to respect the goings-on of this series, unless you're a serious Stargate fan.

SGU has a history, short though it may be, of giving short shrift to its foundational concepts.  It began the series by stranding the main cast from Earth, without contact.  It seems that they felt forced to quickly abandon that notion and that the internal politics of Destiny, the ship on which they travel, could not hold audience interest without outsiders remaining on earth stirring the pot, so to speak.  There is not yet much sign of overcoming this tendency.

The show's principle players themselves reflect the travails of its creative team, in that we must rely on antiheroes Nicholas Rush and Camile Wray, played by veterans Robert Carlyle (Trainspotting, The Full Monty) and Ming-Na (Mulan, ER) respectively, to carry the show's dramatic weight, and ironically much of the audience's sympathy, as opposed to the many others who have long since boiled away any semblance of it, so tenuous in a show replete with moral ambiguity as I have said.

A sign of how much of the show rests on the shoulders of the veterans came late in this season, as the show was improving, in the form of a surprise.  Rush-focused episode "Human" should have been the highlight of the series thus far, but somehow fell short.

Besides the colonel's aforementioned aggravated attempted murder, the weaknesses of the writing and cast in selling their characters reaches a nadir in a midseason plot pitting military against civilians on Destiny.  The veterans, as I mentioned earlier, continuing to carry the dramatic weight of the show, are both on the civilian side.  Predictably, SGU here fails to honor Stargate tradition, which ordinarily depicts military leaders as competent and honorable, and civilian rulers as hyperpolitical, reactionary, and not a bit insane, and instead shows up Colonel Young as the strongman at the head of a bit of an American junta.  This merely legitimizes the grievances of the civilians, however much the editors may wish to portray them as dastardly plotters; were this meant to be our interpretation, it might be forgivable, but I doubt that is the case.  Furthermore, an attempt to equate Young's attempted murder of Rush with Rush's earlier attempt to cast ironically false suspicion of murder on Young is quite laughable.  In the real world, we demand civilian control of the military for a reason.

Despite all these problems, I'm forced to grant that while this show will probably be forever overshadowed, critically if not in ratings terms, by its earnest competition on Syfy, that the show is getting better.  Lateseason back-to-back entries "Sabotage" and "Pain", both naturally leaning heavily on Rush and Wray, are the first to make me say "that's worth seeing again".  These small samples, and the expert in-story handling of an actress pregnancy, may be signs of better days to come.  If so, despite the record so far, I must recommend that you see it, if only because it is quite likely that the creators will continue to learn from their mistakes, and make the upcoming season 2 into something really worth watching.  We can only hope.  It will then fall to SGU's mostly fresh-faced cast, now all too often evocative of SG-1's own episode "200" parody of youth-skewing series, to rise to the challenge.

For more information about Stargate Universe visit the FlickDirect Movie Database. This release has been provided to FlickDirect for review purposes. For more reviews by Stephen Compall please click here.

Stephen Compall
You would think that, having done this at least twice before, producing 15 seasons of Stargate franchise television, the makers of Stargate Universe would know what they're doing right off the bat.  SGU, however, in its first 10 episodes, strayed too far outside the comfort zone, and we fan...
Full Review | Grade: C