Ballers Season Two is even more “ballistic” than Season One! 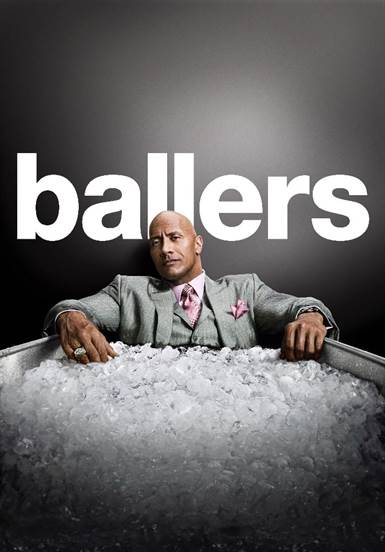 Purchase   DVD/Blu-ray/4K UHD
When Ballers first appeared on HBO in 2015, it was pretty close to what I was expecting.  Football, loose women, money, and fast cars permeated every episode (well, I hope the football part would since the show is called Ballers).  However, it also included a plot worthy of taking notice.  Season One was a solid effort and kept audiences interested.  Topping it would have been tough.  Somehow though, HBO managed to do it with its sophomore season out now in Digital HD.

For those unfamiliar with the show, Ballers is mostly about former NFL player Spencer Strasmore (Dwayne Johnson; Central Intelligence).  Broke, forty, addicted to Vicodin, and without a career, Spencer ends up as a financial advisor/mentor to young football players.  He, along with his partner Joe (Rob Corddry; Hot Tub Time Machine), will do almost anything necessary to help these guys, while trying to keep them financially solvent (unlike Spencer in the prime of his career).

Season Two of Ballers downplays some of the clichés we saw in Season One and really starts to have even more of a plot.  By the end of the season, Spencer has pretty much hit rock bottom, realizing his career is never going to happen and his health is failing. His girlfriend has also moved to the Northeast and his nemesis Andre Allen (Andy Garcia; The Untouchables) has basically undermined him to take all his clients.

Meanwhile, Ricky (John David Washington; Malcolm X) turns down the largest free agent contract with the Rams on the advice of his estranged father who he has decided to let back into his life.  If both decisions were a smart move remains to be seen. Charles (Omar Benson Miller; 8 Mile) gets cut by Miami only to be brought back as front office management; something he seems to excel at except for the cutthroat, backstabbing part.  Newcomer draft pick Travis Mach (Adam Aalderks; Curveball) is keeping Spencer and Agent Jason (Troy Garity; Boss) on their toes and Vernon (Donovan W. Carter) pops his Achilles Tendon playing paintball which puts his multi-million dollar contract with Dallas in jeopardy.

With most of the cast from Season One returning, Ballers is like a well oiled machine as it moves into a comfortable pace and rhythm.  This is one of the best performances I have seen from Johnson and Season Two shows him stretching his emotional range even further.  Corddry is fantastic as and the two guys together are like watching a blossoming bromance.  Washington and Miller play off each other well, even when they are fighting, and Carter spends most of the Season brooding.  With a strong supporting cast including Garcia, Dule Hill (The West Wing), Richard Schiff (The West Wing) Jazmyn Simon (Baggage Claim) and Ariella Kebbel (The Vampire Diaries), Ballers shines even more the second time around.

The Digital HD has 1080p high definition video quality that is sharp and clean and truly accentuates the gorgeous South Florida scenery.  Likewise, the DTS-HD Master 5.1 audio shows off the soundtrack that is mostly permeated by todays rap.  The mix of dialogue and music is a little off, but not as glaringly as with other products.

The extras are few and far between.  The Inside the Episode feature after almost all the shows are the same as what was on television, only now you can watch them back to back without sitting through the episode first.  The other features include the 1 minute Season Two Trailer and a 2-minute Invitation to the Set, which is very similar to the inside the episode pieces, only on a broader scale.

With more drama and a more developed backstory, Season Two expands on the groundwork laid in Season One.  We see changes in the characters that show more maturity and help us invest more in them as relatable human beings.  Besides Johnson's wardrobe, that is certainly chic yet ugly, I can't see much worth changing in Season Three.  Ballers is on an upward trajectory that shows no sign of come back to Earth.  As stated in the extra... Ballers Season Two is even more "ballistic".

Download The Complete Second Season in Digital HD/4K from the iTunes store.