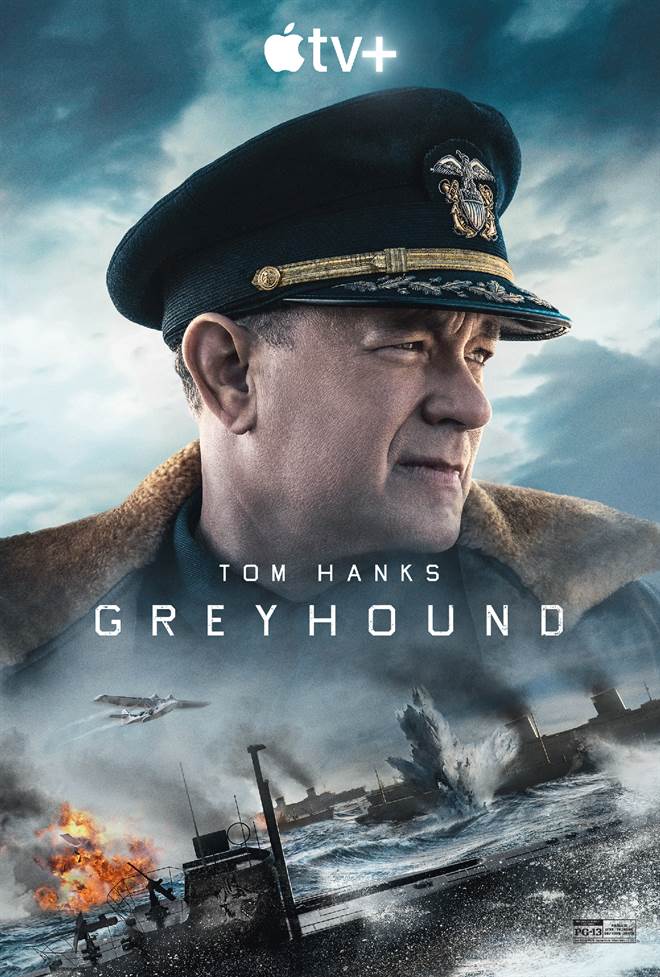 World War II is considered to be the deadliest wars in history with over 70 million fatalities during the six years of fighting.  The details are still taught in classrooms throughout the world and a plethora of books and movies have been made telling the story from various viewpoints.  In 1955 British author C. S. Forester, wrote a novel entitled The Good Shepherd about a naval officer given his first command of a warship fleet as they escort allied cargo ships across the Atlantic.  Sixty-one years later it was announced that Tom Hanks (Forrest Gump) was writing a screenplay about the novel for a film called Greyhound in which he would also star.

Commander Ernest Krause (Hanks) had been passed over for promotions before so he was excited to lead a group of destroyers as they protected 37 cargo ships crossing the North Atlantic Ocean to bring much-needed supplies and troops to Europe. For a certain amount of time on each end of the journey, the ships were protected by airplanes but, unable to fly too far from shore, the fleet eventually entered "the pit", a stretch of ocean where the ships were vulnerable to U-boat attacks from German submarines.

Krause, despite being a career Naval Officer, had never been in action during a war whereas the other destroyer captains had been fighting the Germans for two years.  Doubt crept into his psyche causing him to question his ability to lead as German torpedoes attacked. He also had to learn to deal with casualties and fatalities on both sides and take responsibility for the death of German soldiers.  As a devout Christian, he had to reconcile his orders with his beliefs while in the throes of engaging the enemy in battle.  In the end, he battled his personal demons and physical exhaustion to deliver most of the fleet.

Hanks is excellent, as usual, but this is a different type of role for him.  The screenplay he wrote is mostly driven by the actions of war with little drama or character development to speak of.  Hanks also has a large presence which becomes a double-edged sword.  He definitely fits the bill as a commander of a naval fleet, but he has so much confidence that it is hard to see Krause's insecurities underneath the veteran actor's confidence.   The rest of the cast is good but many of them indistinct making it difficult to differentiate between them.

Director Aaron Schneider (Get Low) sets the scene beautifully with grey skies and violent seas. The score also offers moments that sound like a cross between a boat siren and a whale singing giving the unfolding action even more ominous. The visuals of the torpedoes streaming through the water and barely skimming the ship as Krause watches is incredibly powerful, as is the view of blood and debris in the water after the Greyhound (Krause's destroyer) destroys one of the German submarines.

Greyhound is tense and intense with heart-pounding suspense and split-second action taking place in very tight quarters.  However, if you are not familiar with naval terminology you will be lost sometimes and, as mentioned, the plot needs more character development.  Elisabeth Shue's (Leaving Las Vegas) role is small and rather insignificant though one has the sense she should be more prominent in the plot. The fact that she is not just backs up the complaint about character development.

Hanks is an American treasure and one knows any project he works on is going to have a certain level of quality behind it.  Greyhound is no different but, at the end of the day, it just feels incomplete.  There is more to this story that should have been explored.

For more information about Greyhound visit the FlickDirect Movie Database. This release has been provided to FlickDirect for review purposes. For more reviews by Allison Rose please click here.