Reinhart and Abrams were great casting choices and they bring depth and maturity to their roles. 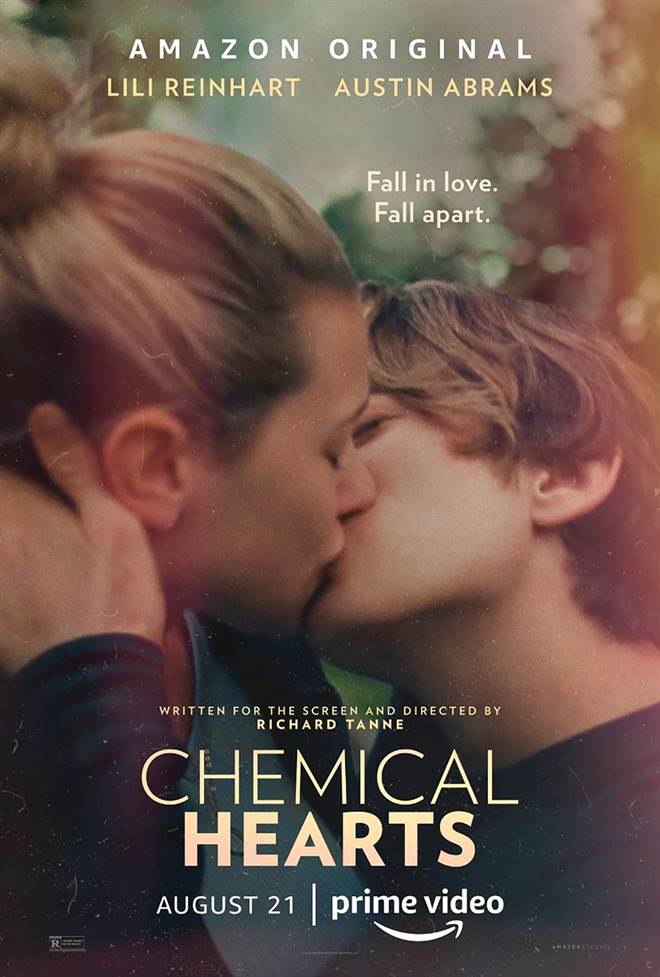 Being a teenager is difficult under the best of circumstances but when one's high school years are marred by tragedy; it can shape them negatively for the rest of their lives.  This is such a common theme that numerous novels, movies, and television shows have touched on this topic throughout the generations.  The newest version of this story, Chemical Hearts, is headed to Amazon this month and is bound to attract the tween/teen population. It also doesn't shy away from historically controversial topics such as suicide, drugs, same-sex relationships, and intercourse.  Intertwining these subjects into a deeply emotional story gives the film even more weight than it would have had otherwise.

Henry (Austin Abrams; The Walking Dead) is entering his senior year and is looking forward to becoming the editor of the school newspaper though he readily admits he hasn't done anything extraordinary in the past three years.  His plans suffer a minor glitch when new student, Grace Town (Lili Reinhart; Riverdale), is offered the co-editorship right along with him.  Even though Henry reaches out to her, Grace is distant and obviously both physically and emotionally broken.  After doing an internet search, Henry discovers Grace was injured in a car accident that killed her boyfriend.

As Henry tries to get closer to Grace, she incrementally thaws and allows him to see certain parts of herself but never fully opens up to him.  Henry falls in love with Grace and she seems to like him too, but she is still grieving the loss of her football star boyfriend, Dom.  When Grace misses school on the anniversary of the car crash, Henry goes to her house to see if she is ok.  When he is offered the opportunity to wait for her upstairs, he discovers the truth and is devastated by her betrayal.

While the story has an interesting twist, its foundation is based on the universal idea of all teenagers being tortured soles who constantly have drama in their lives.  What it offers is a detailed view of the grieving process and how survivor's guilt can play a huge role in a person's life.  Writer/director Richard Tanne (Southside With You) seems to have a solid grasp on the teenage psyche and his dialogue choices are purposeful and deliberate.  His pacing is excellent, so the movie never drags, which is a good thing since it taps out at just over 90 minutes (including credits).  It is also interesting how Tanne infuses science into the script which seems to validate the emotions Henry is feeling at various points in the movie.

Reinhart and Abrams were great casting choices and they bring depth and maturity to their roles.  Perhaps it is because they are both in their early twenties but are portraying teenagers.  Reinhart is especially well suited to portray Grace as she exudes a calmness that masks the turmoil within.  She also has an air of mystery surrounding her that lends even more credibility to Grace's story and her distance from the rest of the world.  The supporting cast is very good and none of them overpower the two leads in any way.

When I was a teenager, movies for my age group included titles such as Pretty in Pink, Sixteen Candles, The Breakfast Club, etc.  (yes, I know I am aging myself) but today's movies geared towards young people seem to tackle more complex issues and have more diverse characters.  Of course, with technological advancements, our youth need to mature faster which is probably why movies targeted to their age group tackle deeper issues than they did thirty to forty years ago.

Bottom line is, with a solid cast and a well-written script, Chemical Hearts offers insight into today's youth and some of the challenges they face.

Jumanji: The Next Level