Iannucci offers an interesting interpretation of this classic story, beginning with the casting. 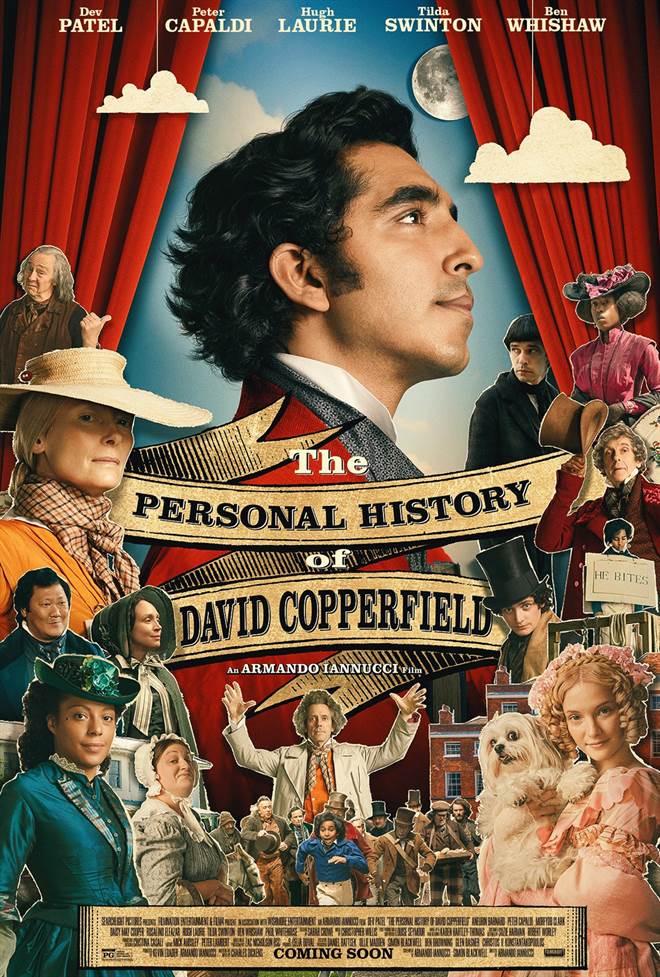 Charles Dickens is considered to be one of the greatest writers of the Victorian era; penning 15 novels, 5 novellas, and a large number of short stories.  One of his most famous novels was the eighth one he wrote entitled The Personal History of David Copperfield, and Observation of David Copperfield the Younger of Blunderstone Rookery or simply, David Copperfield.  Originally published as a series of short stories, Dickens admitted that it was probably his favorite work.  The novel has been interpreted a number of times on the radio, at first, and later on television and film.  The latest adaptation, which was written and directed by Armando Iannucci (VEEP), is titled The Personal History of David Copperfield and it has seen a limited theatrical release in various parts of the country.

David (Dev Patel; Slumdog Millionaire) was born to a fun-loving mother and a deceased father.  He and his mother lived with their housekeeper but when his mother remarries, David discovered that his stepfather is a strict disciplinarian, who decided to send him away.    Several years later David was visited by his stepfather who informed him that his mother had died causing David to run away from the factory where he worked and sought out his father's sister, Betsey Trotwood (Tilda Swinton; Marvel's Doctor Strange).

Trotwood provided David with an education and the ability to apprentice in London under Mr. Spenlow (Matthew Cottle; The Windsors) where David fell in love with Spenlow's daughter, Dora (Morfydd Clark; Crawl).  However, when Betsey's money is gone due to bad investments (which actually turns out to be from employee embezzlement) David has to fight to regain his status.  After losing Dora, David realizes he loves Agnes (Rosalind Eleazar; Harlots), the daughter of Aunt Betsey's financial advisor, Mr. Wickfield (Benedict Wong; Marvel's Doctor Strange).  Always very literary, David is encouraged to write and becomes rich and famous writing stories.

Iannucci offers an interesting interpretation of this classic story, beginning with the casting.  If keeping with tradition, He would have cast Caucasian, English actors but instead he chooses a very diverse cast, which I think adds a new layer to this story.  I have always liked Patel and he does nothing to change my mind as the lead character, David Copperfield.  Veteran actors Hugh Laurie (House), Swinton, and Peter Capaldi (Doctor Who) have memorable performances as do Eleazar and Clark as David's love interests.

While the first act starts off a little slow, it gradually picks up steam and is much more interesting by the end.  Iannucci also takes some poetic license with the script as it would be impossible to fit all of Dickens' details in two hours.  The set designs and costumes are very well done as well, transporting the viewer to 1870s England.

It is a difficult task to edit out some of the details of a novel and still manage to keep the gist of the story intact but Iannucci manages to do it, for the most part, with minimal moments of confusion.  This is not only a testament to his direction and casting but to his ability to recognize what the most important elements are and how to incorporate them into the movie.

The Personal History of David Copperfield is an entertaining film with an excellent cast and some well-done writing.  The visuals are striking and the details seem to be authentic to the time period.

This film is also rated PG so the whole family can enjoy it as a brief outing from the monotony of being homeschooled and quarantined for the last several months.

The Personal History of David Copperfield images are © Searchlight Pictures. All Rights Reserved.