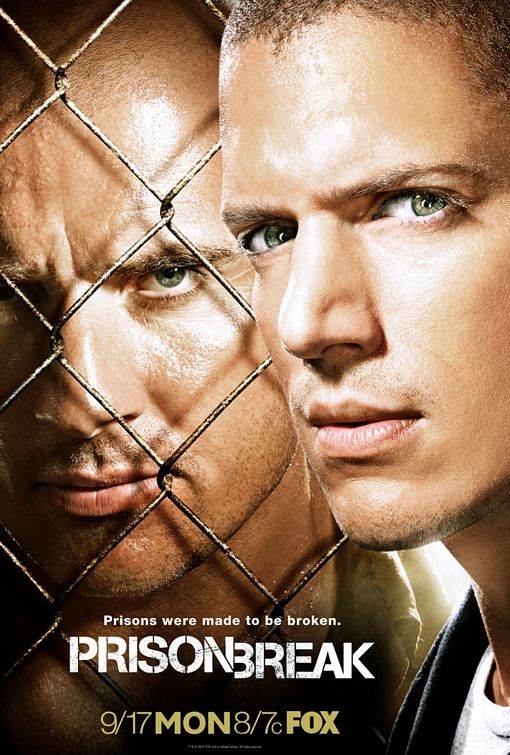 Prison Break is a fairly straightforward idea: an innocent man is imprisoned due to a large and unlikely political conspiracy and sentenced to die. His brother, a genius structural engineer, tries to free him legally, but then finally decides to get arrested in order to break his brother out from the inside. The brother, a brooding Wentworth Miller, is a master planner who scopes out a complex prison escape scheme -- with lots of alternate plans. The plans require the help of targeted inmates, including a man who may be the famous D.B. Cooper, to get out. Over the course of a 22-episode season, they work on the escape. Five seasons later, the show wraps up -- so says Wikipedia -- and, presumably, the chase comes to an end.

I commented to someone that Prison Break was taking a taut, feature-length film, and stretching it over a full season. When I did some research, I discovered this was more or less exactly what happened. The show had some initial drafts as a movie. Then, when it was finally picked up after a lot of studios turned it down because they doubted it had legs, it became popular. Therefore, the very first season was extended in mid-flight (apparently the hiatus caused some problems: the character was sentenced to die in 'May', and by the time they resumed shooting, it was snowing).

While I do not know the entirety of the original vision for the show, I suspect this experience shaped it strongly: Prison Break's foundation is a series of episode-to-episode cliffhangers. Nothing ever goes right for the protagonists, or when something does, it collapses just as quickly - causing the situation to be built on hit-after-hit of near catastrophes. This culminates in the season finale which is one of the most nail-biting cliffhangers I have ever seen in a TV show.

The saving grace is that the show's regulars and its large cast are all perfectly designed to be highly watchable. Miller, as the main character, Michael Scofield, manages to be both intense and quiet while projecting a sense of vulnerability and empathy. This is hard to pull off. His character's brother, the sentenced-to-die, Lincoln Burrows (Dominic Purcell) is comparatively wooden but gets less screen time. On the other hand, it seems the notes for his character indicate that his shirt must always be opened whenever it can be to show off his physique. There is no other possible explanation for him wearing a business suit in Season 2 with his shirt opened down to almost his navel.

The prison cast is made of 'bad guys' and 'better guys' -- with the two brothers and maybe one or two others qualifying as actual good guys. It is also a testament to the writing that we want to see all these guys get out. It is even more surprising that the Prison Warden, Stacy Keach, is actually a humane individual, contrary to every other media Prison Warden I have ever seen. Even more surprising is that apparently he is modeled after a real Warden where the actor served six months. On the other hand, the guards, almost without exception, are pretty bad with Wade Williams very nastily leading the pack. It is the strength of the characters that keeps the show moving; if you don't care about these guys, the series of fairly punishing and manipulative cliffhangers will wear you out pretty quickly.

The silver lining for the show's modus operandi is that since it is all done, you can just watch it straight through. Even better, if you have NetFlix, all of Season 1 and Season 2 (I haven't checked further) it is available online so you do not have to wait for them to send you discs as long as you have access to their streaming service. The only problem is that this will take about 84 shows, which if you get really engrossed, is going to be a big chunk of your life.

Also, it feels manipulative. To be certain, it is manipulative. The show is designed to keep you watching. This means they can never give you the pay-off you want until the very end. At least through Season 1, it certainly teased but did not deliver. I felt after Season 1 ended that it "ended," and I wasn't really that interested in Season 2; of course, my wife felt differently, so we are watching it. It is more of the same. The formula works.

I want to note something else. The show has, as a conceit, the idea that Scofield, the genius engineer, has taken a "phone book" full of plans, counter-plans, and methods of screwing with the authorities, as well as methods of getting messages out to people...and so on; he has also tattooed it on his body. This results in a massive gothic tattoo that covers his whole torso and arms. Looking at it, most people see nothing; but if you look right, the whole complex plan is allegedly laid out there. It isn't really though. I stared at that sucker hard and still couldn't make anything out of it. Plus, most of his plans wouldn't require tattoos to remember; only a few specifics would take that much work. I wondered why the show's creators did this, and the only answer I have is that they did it because it is cool. On the other hand, something like 13 prisons banned the show, so maybe they are afraid of something. Still, in terms of being actual quality of thought on breaking out of a prison, I think the show is somewhat light.

As a network TV show, Prison Break is limited in what it can do. The characters can't talk like they're in prison. The amount of racial animosity has to be dialed down. There is only a hint of prison rape (although there is some), and for the most part, the show's creators do a good job of it. I read that the outdoor scenes are filmed on the real (but currently shut down) Joliet Prison and that the tiny cells were actually done on a set. They had to be made much larger than they really are to accommodate cameras and the like. The physical look of Prison Break is strong. It is a solid attempt even if cable shows such as Oz give us a much starker and more shocking picture.

Prison Break is so well crafted it deserves a look. I found it hard to keep watching, but if it wasn't so well done, I would have turned it off after the first five unlikely obstacles and escapes. I don't have any illusions about how hard that is to do, and I respect it.

I want to make a note about the Netflix digital download system. I have an LG Blu-Ray player that is Netflix compliant. There is a list of devices that are compliant, and you can buy a special one if you do not have one that works. The interface is very straightforward and very nice. You add movies to your "instant queue" through the Netflix website on your computer. Then you go to your TV and see your queue. The Blu-ray player uses wireless networking to get to the Internet, and you have to put in your Netflix username and password. When you select a movie, there is approximately a two-minute wait to "download"; it buffers, and there is a quality bar showing what quality you will get it in.

With my average DSL, the quality was definitely TV quality, although not high-def, and the sound was fine. There was almost no lag time or pixelation. A few times, the movie would stop and re-adjust for a download; but that was not a big deal. It happened once or twice a season -- not once or twice an episode. If you "pause" the movie, it will pick up where you left off. Rewinding does take some time; you move back by scene and there is a pause while it re-buffers the show. Netflix keeps track of where you are in the season, so when I go back into the Netflix queue, it will show that I am on "episode 15" or whatever episode it is. It keeps me from having to write it down.

On the whole, this is a superior user experience. I have downloaded digital content from iTunes, and while it is nice to have the whole thing in high-def on your computer, or iPod, or whatever, the two-hour wait is a less enjoyable experience. So far, I think Netflix does it right; and I believe their model if you have the right hardware is the user experience I am looking for.