For the average moviegoer or for fans of Jennifer Garner Peppermint doesn't go far enough to offer a worthwhile experience. I don't think we will see a sequel coming down the road for this one and that isn't necessarily a bad thing. 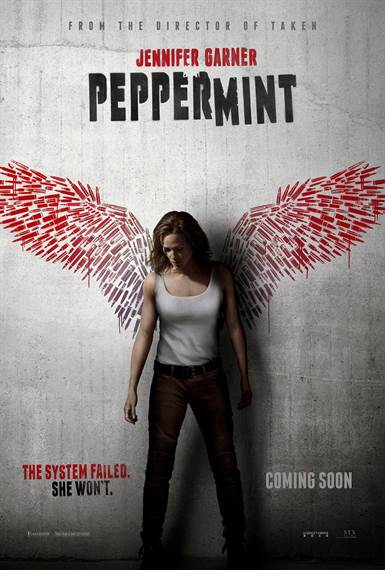 Purchase   DVD/Blu-ray/4K UHD
Seventeen years ago Jennifer Garner became a household when starred in the television series Alias. For five years audiences watched her play Sydney Bristow a double agent for the CIA and an agency called SD-6. During her time on the show, she became known for her action work and the physical expertise she displayed. This month an older, more seasoned Garner once again offers us a look at her moves when she takes on the lead role as Riley North in the feature film, Peppermint.  Starting on Friday, fans can watch her wield a gun and punch bad guys as she seeks revenge.

Riley and her husband Christopher (Jeff Hephner; Interstellar) worked hard to prove a decent life for their daughter Carly (Cailey Fleming; Star Wars: The Force Awakens).  They struggled financially but hoped for things to get better.  When Christopher decided to help his buddy steal money from a drug lord in Los Angeles word got around but, having a change of heart, Christopher backs out before the heist.  Unfortunately, the drug lord decided to make an example of Christopher and gunned him and Carly down right in front of Riley's eyes.  When dirty cops, lawyers, and judges let those accused of the crime walk away scot-free Riley vows revenge.

Fast forward five years to the present day L.A. On the anniversary of Christopher's and Carly's death bodies start showing up and a killing spree seems to be developing right before the Police and FBI's eyes.  Riley, who fell off the grid years ago, seems to have reappeared in California to exact her revenge on those individuals that were never brought to justice as well as those who let them slip through the cracks.  Her plan is to dispose of them one by one on her way to the Drug lord himself, Diego Garcia (Juan Pablo Raba; Six).  By the end the body count is well over thirty and Riley is in custody, having avenged her family's deaths.

Garner may be older but she can still dance through an action sequence with speed and precision.  She is outwardly strong, tough and uncaring but she also offers us glimpses of Riley's soft and sentimental underbelly.  John Gallagher, Jr. (10 Cloverfield Lane) and John Ortiz (Kong: Skull Island) are well suited as the Police Detectives who always seem to be one step behind Riley and Raba is perfectly cast as the despicable, ruthless Garcia, who deserves everything he gets.

The problem with Peppermint is that it is run of the mill action and mostly forgettable.  There are no interesting, choreographed fight sequences like John Wick and nothing unique or unusual like fight scenes in last month's Mile 22.  The dialogue is neither intelligent or innovative and can even be seen as boring and predictable at times. The revenge storyline is traditional and the only moments that evoked any real emotion from the audience were sadness when Riley's daughter died and anger when the criminals that killed her family were set free as it became painfully obvious that the DA and the judge were both on Garcia's payroll.  Even the moment viewers discovered who the crooked cop was seemed lackluster and uneventful.

For fans of action movies, there is enough here to keep them interested and there are certainly a few "kill shots" that will please them.  For the average moviegoer or for fans of Jennifer Garner Peppermint doesn't go far enough to offer a worthwhile experience.  It doesn't necessarily challenge her emotionally most of the time and doesn't push her physically except in a couple of the fight scenes.  I don't think we will see a sequel coming down the road for this one and that isn't necessarily a bad thing.