Davidson had to play Scott as so much of the story parallels his own life. He obviously drew on his experiences to bring out the emotions he faces in the film. 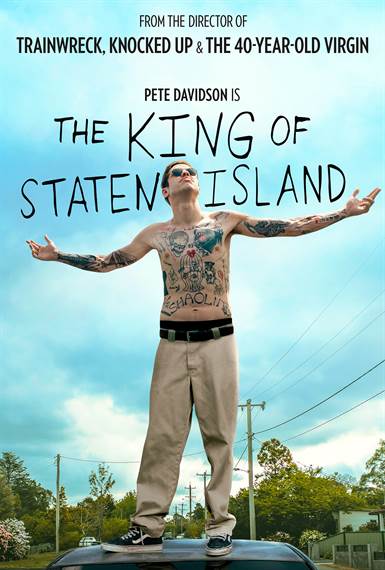 The name Judd Apatow (The 40-Year-old Virgin) has become synonymous with successful, comedic films in Hollywood.  Pete Davidson (The Dirt) started his career in the comedy club scene and moved up to become a regular on Saturday Night Live. When Apatow directed Davidson in a small role in 2015's Trainwreck he knew Davidson was something special so when Davidson came to Apatow with a screenplay he had co-written, Apatow eagerly jumped on board.  The King of Staten Island is loosely based on Davidson's own life and interestingly turns out to be more drama than comedy.  However, that shouldn't turn fans of Apatow's/Davidson's away from the film as it has a lot to offer.

Scott (Davidson) is a 24-year-old guy living with his mother and younger sister on Staten Island.  Scott's father was a firefighter who was killed fighting a fire when Scott was 7 years old.   This tragic event has played a large roll in who Scott has become as an adult.  His one ambition is to become a tattoo artist but unfortunately, he isn't that good and his hope in getting an apprenticeship at a local tattoo parlor doesn't come to fruition.  When he illegally starts to tattoo a 9 year- old boy, Harold (Luke David Blumm; The Sinner), Harold's father, Ray (Bill Burr; Breaking Bad) shows up at Scott's house and yells at his mother, Margie (Marisa Tomei; My Cousin Vinny).

Ray, who happens to be a firefighter as well, calms down when he learns who Margie's late husband was and instead invites her out for coffee.  As the two become closer, Scott is increasingly uncomfortable, especially the idea of Ray becoming his stepdad.  Margie comes home one day to find the two men physically fighting and tells them both to leave.  With nowhere else to stay, Scott ends up at the firehouse and learns a lot about himself and in what direction he wants his life to head.

Davidson had to play Scott as so much of the story parallels his own life. He obviously drew on his experiences to bring out the emotions he faces in the film.  Tomei and Burr are both great and have good chemistry.  Bel Powley (The Morning Show) plays Scott's on-again/off-again girlfriend who earns for more that Scott is willing to give. Apatow's real-life daughter, Maude (This is 40), portrays Scott's younger sister Claire who, unlike her brother, has goals and ambitions and heads off to college leave Scott and Margie together.  Steve Buscemi (Boardwalk Empire) is Papa, the elder statesman of the firehouse who imparts some wisdom on Scott.  What makes his small role so great is that he was a New York fireman before he became an actor.

For the most part, the scenery is rather nondescript which is unfortunate since the title of the movie has Staten Island in it.  The firehouse where Scott ultimately ends up is also drab and dreary and could be any number of firehouses in New York.  The script itself is interesting because, for two men known for their comedy, this movie is more serious and dramatic than an audience would expect.

If you go into the movie knowing what to expect you will find a heartwarming, realistic story with some terrific characters.  If you go in expecting Apatow's usual comedic flair you may be disappointed as the laughs aren't as numerous as his previous films.  However, While it may be different for Apatow and Davidson, it is none the less entertaining while attempting to tell a sweet story with a moral and a lesson snuck in here and there.

Purchase a DVD/Blu-ray/4K UHD physical copy of The King of Staten Island today at Amazon.com

Download The King of Staten Island in Digital HD/4K from the iTunes store.

For more information about The King of Staten Island visit the FlickDirect Movie Database. For more reviews by Allison Rose please click here.

The King of Staten Island images are © Universal Pictures. All Rights Reserved.