While Saint Maud is categorized as a horror/thriller, I found it to be more a drama about a delusional and mentally ill woman who turns to religion as a way to cope. 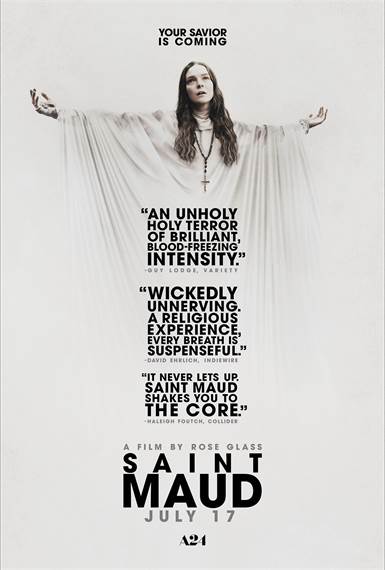 Nurses are often taken for granted.  They are with patients sometimes more than the patient's own family and often do what is necessary to make those that are sick feel a little more comfortable.  Nurses and home care workers who work with terminally ill patients must be akin to saints, as they take care of individuals who they know will eventually pass away.  The work can be long and difficult only to lose their charge in the end.  For Katie/Maud (Morfydd Clark; Crawl) being a palliative care nurse becomes so much more when she, as a devout Roman Catholic (hence the name change), tries to save her patient, Amanda's (Jennifer Ehle; Zero Dark Thirty), soul.

In the past, Katie was unable to save the life of one of her patients despite administering CPR.  This leads Katie, now Maud, to follow the strictest teachings of the Catholic Church while trying to find a purpose for her life.  When she is sent to a home to care for a former American dancer, Amanda, who has stage four cancer, Maud decides it is her calling to save the dancer's soul before she passes.  She tells Amanda as much and, in an attempt to amuse herself, Amanda pretends to feel God around her as Maud told Amanda that she does.

Amanda often has a female "friend", named Carol (Lily Frazer; The Gentlemen), sleepover and Maud becomes acutely aware that Amanda is paying Carol for sex.  Fearing for Amanda's soul, Maud all but begs Carol to stop seeing Amanda and feels she has succeeded until Carol shows up to Amanda's Birthday party and Amanda tells all her friends that Maud tried to drive Carol away and mocks Maud for her beliefs.  Maud becomes so angry that she slaps Amanda and is subsequently removed from the house. Despondent, Maud begins stalking Amanda and her new care nurse until she finally realizes what she must do.  Unfortunately, Maud's meeting with Amanda doesn't go as she had planned and Maud decides she needs to sacrifice herself to God.

Writer/Director Rose Glass (in her feature film directorial debut) offers up wonderful yet disturbing images and chooses a color palette that is dreary and dark.  This detail sets the tone of the film as does Glass's use of imagery to offer the viewer insight into Maud's mind.  Glass also gives the audience a taste of Maud's past as a juxtaposition of her reinvention.

Clark is well cast as the fanatically devout young woman who believes her mission is to "save" others and who doesn't understand when those around her don't seem to care that she is trying to help them.  Ehle's portrayal of Amanda offers a sharp contrast to Clark's "Saint Maud" as perhaps a visual representation of opposing views to religion and how to live one's life, even while staring death in the face.  Clark also does an excellent job of conveying optimism and hope while being surrounded by skepticism and non-believers.

While Saint Maud is categorized as a horror/thriller, I found it to be more a drama about a delusional and mentally ill woman who turns to religion as a way to cope.  Perhaps, since I didn't grow up in such a stern, religious environment, I can't fully grasp or understand the type of Catholicism Maud encounters.  Her devotion and blind faith make for an interesting look into the human psyche but offer very little in the way of horror elements.  The things that make Saint Maud interesting are the script and cinematography but which, in the end, fail to "save" the movie from being mediocre at best.

Download Saint Maud in Digital HD/4K from the iTunes store.

Listen to the Saint Maud soundtrack on Apple Music.

Saint Maud images are © A24. All Rights Reserved.