Having spent time in Syria, Sharrock has a unique perspective on the unrest in the country and the angst and fear of those who fled for parts unknown. 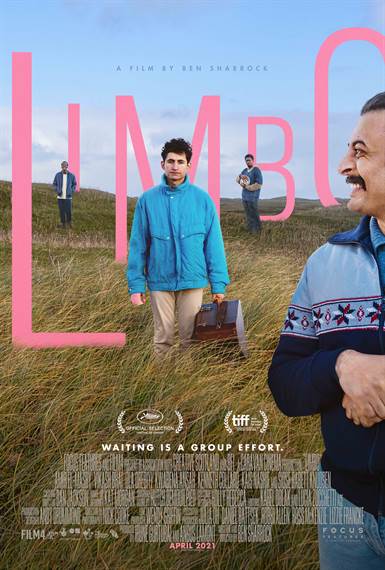 We have all heard the expression, "being in limbo" and I'm sure many of us have experienced the unpleasant sensation ourselves on at least one occasion.  But what does it actually mean?  Well, if one was to look up the definition of the word limbo, they would find the following: an uncertain period of awaiting a decision or resolution; an intermediate state or condition.  For Scottish writer/director Ben Sharrock (Pikadero) this concept takes on a life of its own as he documents the plight of refugees thrust into unknown and sometimes hostile surroundings as they wait to find out if they have been granted asylum.

Omar (Amir El-Masry; Tom Clancy's Jack Ryan) is a Syrian refugee who escaped the unrest in his country.  He ends up on an isolated, Scottish island with three other refugees, all of whom are in "limbo" and living with the fear of uncertainty.  Omar was a celebrated musician in his country playing an Oud, which he brought with him when he left Syria but has since been unable to pick up his beloved instrument – yet another example of his state of being in limbo.  The other refugees have their own demons to deal with as well.

El- Masry's delivery of his lines and his deadpan facial expressions might not always work but for Omar and this film, his blank stares or looks of longing, perfectly portray the emotions Sharrock wanted to express through this movie.  Vikash Bhai (Pandora), who plays one of the other refugees, Farhad, perfectly complements Omar's more serious side. With his chicken-loving, Freddy Mercury-obsessed persona, he counterbalances the other characters and the somber situation they all find themselves in.  The rest of the cast rounds out this group well with a cohesiveness and camaraderie that feeds into the idea that they all have similar situations.

Even though Limbo is considered a drama, Sharrok tries to set up the plot as if it should be a black comedy but it truly is a drama with a few funny moments to break up the heaviness. His visuals, however, are stunning, from the northern island scenery to the close-up of Omar's face.  There are moments where the viewer feels the vastness of the surroundings which is then quickly followed by the intimacy of looking at nothing but the actors' faces.  The abruptness of the contrasting visuals can be jarring but succinctly make their point.

What Limbo is not, is a lighthearted film. It is depressing and isolating and only the most cold-hearted among us wouldn't feel sympathetic towards these men who fled their homes to venture into the unknown. It is, however, a commentary on the political temperature surrounding refugees in counties around the world.  Having spent time in Syria, Sharrock has a unique perspective on the unrest in the country and the angst and fear of those who fled for parts unknown. He ably taps into those emotions and displays them throughout the film.

For only being Sharrock's second feature film, he makes it abundantly clear that he is immensely talented, can make an audience feel emotions with his words and pictures, and has a long and promising career as a filmmaker ahead of him.  Limbo is a thought-provoking anxiety-inducing, gripping movie that stays with the viewer long after the credits end.

Regardless of what you think of refugees seeking asylum, Limbo is about survival and the human spirit which translates into almost any situation.