Blue Bayou has a significant story to tell and the injustice of it all is a sad commentary on where we are today as a society. 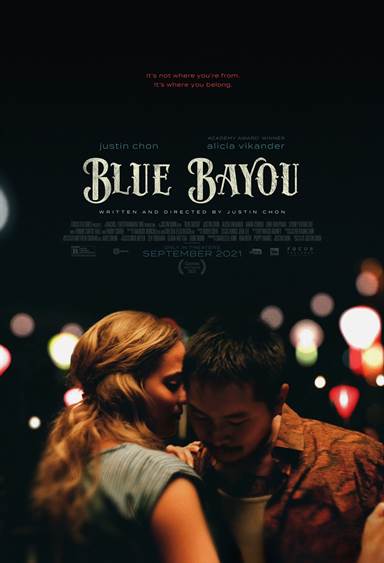 Illegal immigration is a highly debated topic in this country.  Some people believe we should welcome these immigrants who generally come to the United States to flee dangerous countries while others feel they should be sent back to where they came from.  However, there are a few problems with making any immigrants leave.  First, they could be murdered if they return to their homeland. Second, they work many low-wage, manual labor jobs that many Americans don't want to do.  Finally, many of them come here as infants or young children who have no recollection of their homeland and were given no choice to be here.  Blue Bayou, the new film from Focus Features, shines a spotlight on the latter group, especially those who came to the United States after being adopted.

Antonio LeBlanc (Justin Chon; The Twilight Series) was adopted from Korea as an infant and grew up in Louisiana.  His adoptive parents decided they didn't want him and he entered the foster care system, running away as a teen after being beaten by his foster father.  In his younger days, he got into trouble and served time in jail for stealing motorcycles.  Once he met Kathy (Alicia Vikander; The Danish Girl) and became a father to her daughter, Jessie (Sydney Kowalske; Doom Patrol) he left that life behind.  However, an altercation with Jessie's real dad, Ace (Mark O'Brien; Ready or Not), and his overzealous partner (both men are police officers) lands Antonio in jail.  However, this is only the start of where his troubles begin.

As it turns out Antonio's adoptive parents and the agency the adoption was processed through, never submitted the necessary documents to make Antonio a citizen.  Once he is arrested, during the tumultuous time of illegal immigration crackdowns we are now living in, he is told he is being deported.  After consulting with a lawyer, it doesn't seem like he has many options, even though he is married to an American citizen.

Chon takes on triple duty with this film as writer, director, and star.  While he does a great job with camera angles and utilizing both close-up shots and wide vistas, some of his other endeavors don't work out quite as well.  Blue Bayou starts slow and barely picks up steam until the last fifteen minutes of the movie.  There is the "slow burn" technique of building drama and anticipation and then there is the rubbing of two rocks together to hopefully get a spark, which in filmmaking is merely tedious and a little boring.

As an actor, Chon fairs a little better offering a range of emotions from happiness, to anger to heart-wrenching anguish,  Standing right alongside him is Vikander give the level of acting we expect from her. O'Brien subtly portrays the complicated man who fathered a child but let another man raise her.  Kowalske is talented but her previous roles highlight her ability a little bit more than her portrayal as Jessie.

In the end, Blue Bayou has a significant story to tell and the injustice of it all is a sad commentary on where we are today as a society.  Unfortunately, I don't think the movie is memorable enough to become a classic but, for the immediate future, it stands for more than just a low-budget, independent movie that will probably be recognized in some way during the upcoming awards season.

While the movie is slightly better than mediocre, the message is invaluable. Some people come here as adults and are fully aware that they are breaking the law, but for others, especially infants adopted from other countries, deportation is an injustice put on them by the only country they have ever known.