The fluid lines of the animation flow like a winding river offering calmness even in scenes where chaos reigns. 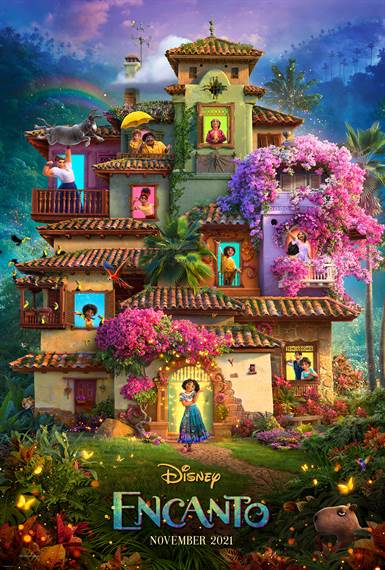 In the last few years, there has been a concerted effort to offer more authentic portrayals of Latinos in entertainment.  For a very long time, they were relegated to the role of 1) the poor housekeeper, 2) the migrant worker 3) the drug lord, or 4) the career criminal/prisoner.  However, there is a rich history and culture associated with each country and each region of the world.  This ideal was showcased in 2017 when Disney released the animated movie, Coco, depicting the Mexican tradition of Día de Los Muertos honoring the loved ones who had passed on.  This year, in time for the busy Thanksgiving movie-going weekend, Disney brings another Latino-themed film to theaters with Encanto.

Several decades ago, Alma (María Cecilia Botero; Amalia) and her husband fled their home with their triplets, Julieta (Angie Cepeda; Jane the Virgin), Pepa (Carolina Gaitán; Narcos) and Bruno (John Leguizamo; Moulin Rogue!).  Sadly, Alma's husband lost his life protecting them but miraculously, the candle Alma had to help light her way never burnt out. Since then, the candle has protected the family, giving each child a special gift...well almost everyone.

Mirabel (Stephanie Beatriz; Brooklyn Nine-nine) is the black sheep of her family as she didn't receive a special gift from the magical candle that has glowed in the Madrigal home for generations.  Making the best of her situation, she tries to be happy and carefree as she watches her sisters and cousins lift heavy things, make flowers from nothing, shapeshift, etc.  One day, during the celebration of her cousin's enchantment, Mirabel had a vision that the candle burnt out and the house was cracking and crumbling apart.  However, when she went to tell everyone, they couldn't see it and accused her of trying to get attention.  However, deep down, each of them knew she wasn't wrong.

While Coco had sprinklings of Mexican culture throughout the movie, somehow it still managed to feel just a little bit "Americanized".  Encanto, by comparison, seemed more authentically Hispanic (but since I am not from Columbian culture this is just the biased musings of an outsider). Also weighing in its favor, Encanto has a solid cast, incredible animation, and music composed by the current Puerto-Rican/American "it" guy, Lin-Manuel Miranda (Mary Poppins Returns). While not the same as some of Miranda's other songs, his music does have a unique "flavor" that is distinctly Miranda.  Joining Miranda on the music is composer Germaine Franco (Coco) blending his original songs with her score in a melodious marriage serving to enhance the Columbian feel of the film.

The fluid lines of the animation flow like a winding river offering calmness even in scenes where chaos reigns.  The colors are so bright and vibrant you aren't sure where to look first.  Varying shades of pinks, reds, greens, blues, yellows, etc. offer depth to the drawings which help make the film more real. Directors Jared Bush (Zootopia) and Byron Howard (Tangled) keep the pacing of the film moving, aware their efforts will keep younger audiences entertained throughout.

Encanto offers a wonderful message of acceptance and understanding that showcases the idea that everyone has unique gifts even if they can't be seen.  While hoping to draw in audiences from every culture, the film clearly gives Latino children characters they can identify with. However, that doesn't mean the movie won't appeal to all children regardless of race, color, etc.  Mirabel is a symbol of the beauty and grace that Columbian women can exhibit and gives them someone to look up to.

For me, I have never been jealous of an animated girl's hair before, but I found myself longing for the perfect curls that Mirabel displayed atop that intelligent brain of hers.

This holiday weekend, take your kids to see Encanto.  It won't disappoint.

Download Encanto in Digital HD/4K from the iTunes store.

Listen to the Encanto soundtrack on Apple Music. 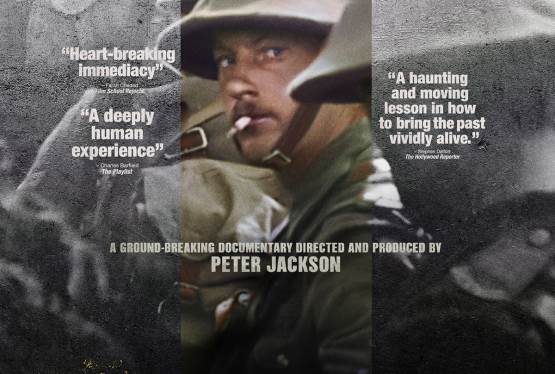