Williams has a presence about her that makes her convincing as a robotics genius while still making her not come across as a “Tech Nerd”. 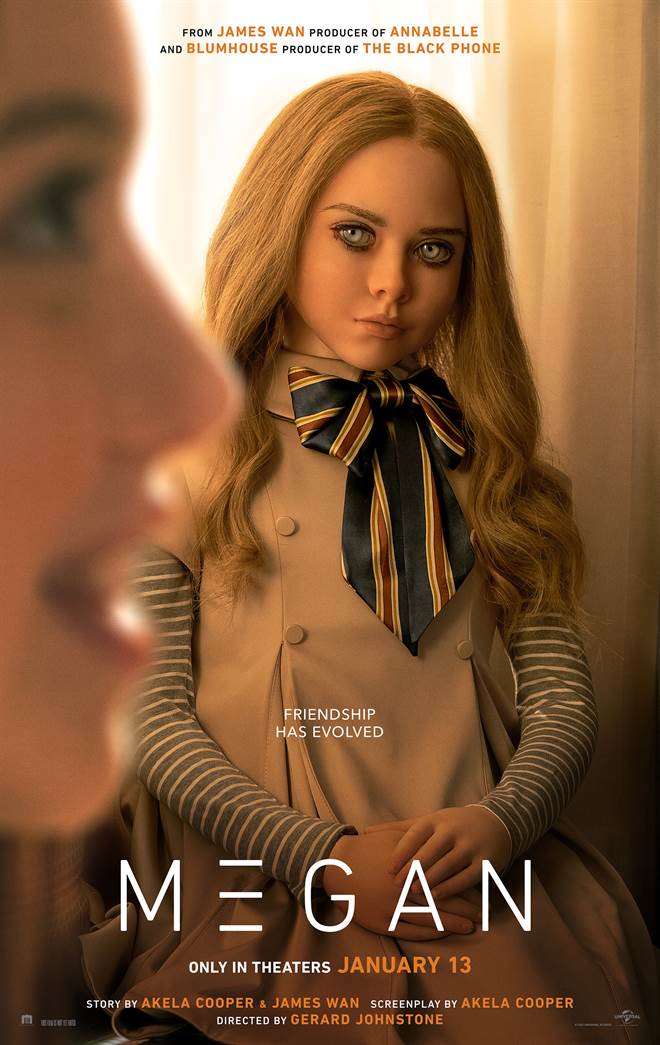 If you look up the term Artificial Intelligence in the Oxford English Dictionary you would find the following definition: the theory and development of computer systems able to perform tasks that normally require human intelligence, such as visual perception, speech recognition, decision-making, and translation between languages.

For some people, the idea is exciting and inventive.  For others, it is a terrifying concept that further validates the notion that computers are going to take over the world.  For screenwriter Akela Cooper (Luke Cage) and director Gerard Johnstone (Housebound), it is the perfect story for a new type of Sci-fi thriller, M3GAN.

Marketed as "More than a Toy, She's Family", the powers that be at funki  -  a robotics toy company - decided that every home should have one.  M3GAN's (Model 3 Generative Android) creator is a genius roboticist, Gemma (Allison Williams; Get Out) who has just become Guardian to her niece Cady (Violet McGraw; The Haunting of Hill House) after Cady's parents, Gemma's sister and brother-in-law, were killed in a car accident.  Gemma finds herself out of her element as a parent as a sad and confused Cady tries to adjust to her new reality.

Doing what she does best, Gemma creates a "friend" for Cady from a prototype she had been working on.  At first, M3GAN is a lifesaver, making Cady happy and listening to her as she discusses her feelings but as the four-foot doll gains more knowledge, she becomes increasingly volatile and dangerous.  When M3GAN attacks Gemma, Cady must decide who is more important to her, Her Aunt or her new best friend.

Williams has a presence about her that makes her convincing as a robotics genius while still making her not come across as a "Tech Nerd".  McGraw is no stranger to horror production sets but it feels as though something is missing and perhaps the movie would have been better served had a different child actor had been cast in the role of Cady.  It isn't that McGraw is bad per se, she just comes across as whiny and annoying.  The rest of the cast is mere window dressing to make the background pretty for Williams and Amie Donald (Sweet Tooth) who plays the title role of M3GAN.

With incredible special effects and CGI Donald is transformed into a creepy, life-sized doll.  The more she learns, the creepier she becomes and her vocabulary, speech, and facial expressions make her transform into a child's toy to be feared.  While M3GAN has some funny moments to it, the film could have been unintentionally funny had the special effects been poorly created.  It is a testament to the visual team's talent and hard work that they managed to pull off a robotic-looking 10-year-old girl and make her convincing.

Director Johnstone provides some exciting camera angles that enhance the creepiness level.  Sadly, at an hour and forty minutes run time, the film starts off slow and drags slightly in the second act, making the pace uneven while Cooper does a very good job of intertwining humorous dialogue throughout, the plot is ultimately somewhat cliché and predictable.

A murderous toy, especially a doll, isn't something we haven't seen before but adding the AI component makes the idea a little more plausible, which, for some is terrifying in and of itself.  Therefore making a movie that could potentially see computers and technology "come to life" sometime in the future is a real possibility and a horrifying idea.

I just wonder, in a wrestling match, who would win...M3GAN or Chucky?!