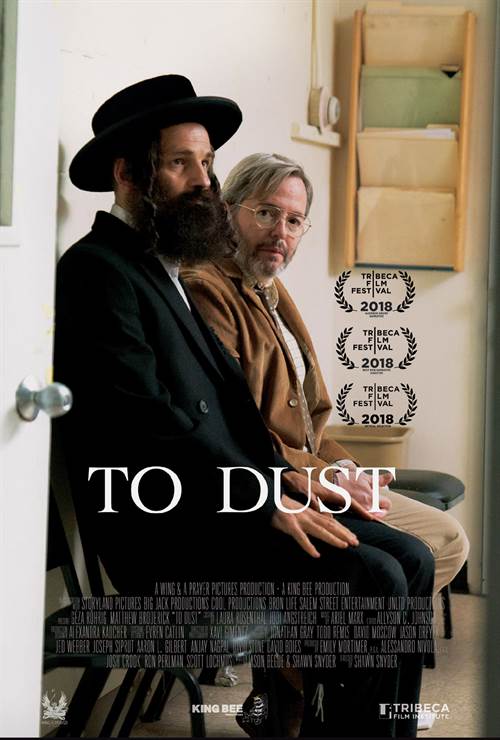 Winner of the Audience Award and the Best New Narrative Award at the Tribeca Film Festival, To Dust stars Géza Röhrig (MJFF 2016 Academy Award-winning film Son of Saul) as Shmuel, a grieving Hasidic cantor in upstate New York who is struggling to make peace with the recent death of his wife. While the rest of his community urges him to move on, his two young sons believe that Shmuel’s odd behavior may mean that their father has been possessed by a dybbuk (a demon believed to be the dislocated soul of a dead person). Breaking his own religious customs, Shmuel approaches a bungling science teacher, Albert (Matthew Broderick), to help him understand the process of decomposition and hopefully put a stop to the nightmares he keeps having. Albert is reluctant at first, but soon becomes Shmuel’s unwitting partner as the two embark on a series of misadventures and outrageous experiments to better understand — and come to terms with — his wife’s passing. Produced by renowned actors Emily Mortimer, Alessandro Nivola, and Ron Perlman, To Dust is a quirky, unconventional dramedy about grief and acceptance.

To Dust images are © Good Deed Entertainment. All Rights Reserved. 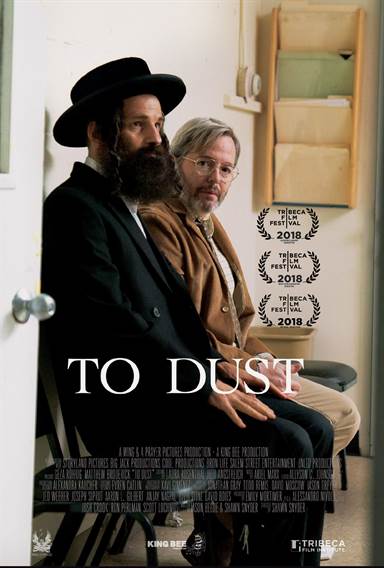 The human race, for the most part, seems to be enamored with the idea of death.  We fixate on what comes next.  Is there an afterlife?  What happens to our soul when our body is gone? Is there such a thing as reincarnation?  Hispanic cultures even honor their dead on El Dia de los  Muertos.  For the filmmaker, Shawn Snyder (Americano) his interest took a decidedly different slant that ended up as a feature film entitled To Dust. Opening in limited release last month the film has received critical acclaim as a unique and interesting story.

Living in Upstate New York with his wife and two sons, Shmuel (Geza Rohrig; Son of Saul) is a Cantor in the Hasidic community.  When his wife passes away from cancer, Shmuel finds himself having bizarre dreams and he suddenly becomes fixated on her body six feet underground.  Hoping to understand more about what is happening to her physical being, Shmuel consults first his Rabbi (Bern Cohen, The Marvelous Mrs. Maisel) and next a funeral Director (Joseph Siprut; Asher).  The latter explains that he isn't a scientist but merely sells coffins for a living.  Naturally, Shmuel's next stop is to the local community college to find a scientist.

At the school, he is brought to the classroom of Albert (Matthew Broderick; Ferris Bueller's Day Off) who initially tries to blow Shmuel off but once he realizes that Shmuel won't leave, Albert finds a scientific book about the stages of decay for the rotting corpse of a baby pig.  Albert jokingly suggests Shmuel buries a dead pig not realizing that Shmuel will show up later that week with said pig.  This starts to two drastically different men on a shared path of scientific experimentation in the hopes of trying to allay Shmuel's fears and doubts about his wife's decomposing body.

With humor, awkwardness and absolutely no sensitivity at all, Broderick attacks the role of Albert with aplomb.  We fully believe his anxious, self-deprecating science teacher persona as he seemingly placates Shmuel and his obsession over decomposition.  Rohrig, for his part, matches Broderick scene for scene and both men are outstanding in their respective roles. The supporting cast including Cohen and Siprut offer comic relief to a somewhat solemn and intense look at science versus faith.

What Snyder does here is infuse humorous moments into a bleak and somber topic.  He also asks us to question our grieving process and how people think about death in general.  The juxtaposition of science against faith on this topic is well done and Snyder along with his co-writer, Jason Begue (Contrition) masterfully manages to make science interesting and death (sort of) funny.  Together they weave a fulfilling and complete story that leaves the viewer satiated and satisfied.

While the subject matter can be bleak and depressing  Snyder veers away from the stereotypical view of mourning and instead offers a different perspective on the whole concept of death.  Questioning the cycle of the physical body rather than the abstract concept of what happens to a person's soul after death offers a unique view with Broderick and Rohrig delivering the message in an unconventional method.

Well written and beautifully acted, To Dust makes one think without becoming melancholy or morose, which is a testament to Snyder as a filmmaker.

If you have a chance do yourself a favor and see this film.  You will thank yourself and Snyder for it. 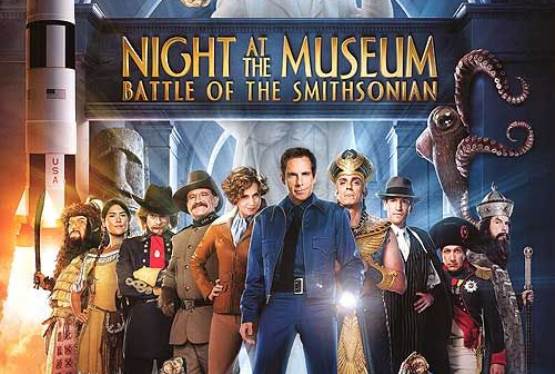 Night At The Museum: Battle For The Smithsonian