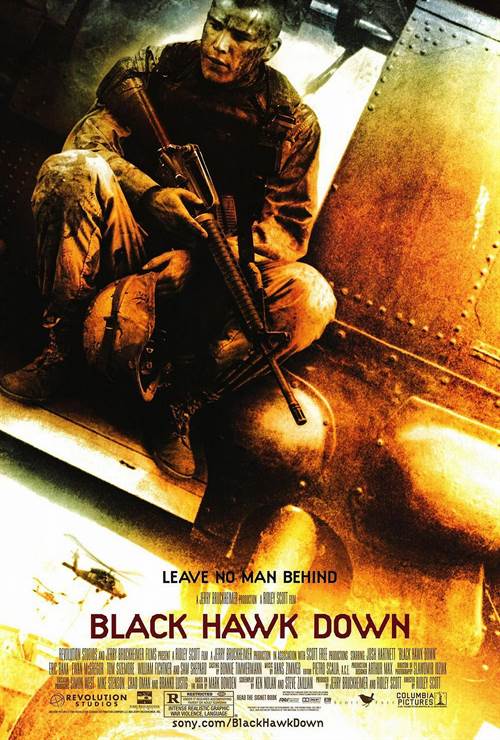 From acclaimed director Ridley Scott (Gladiator, Hannibal) and renowned producer Jerry Bruckheimer (Pearl Harbor, Armageddon) comes a gripping true story about bravery, camaradarie and the complex reality of war. Black Hawk Down stars an exceptional cast including Josh Hartnett (Pearl Harbor), Ewan McGregor (Moulin Rouge!), Tom Sizemore (Saving Private Ryan), Eric Bana (Chopper), William Fichtner (The Perfect Storm), Ewen Bremner (Snatch) and Sam Shepard (All The Pretty Horses). In 1993, an elite group of American Rangers and Delta Force soldiers are sent to Somalia on a critical mission to capture a violent warlord whose corrupt regime has lead to the starvation of hundreds of thousands of Somalis. When the mission goes terribly wrong, the men find themselves outnumbered and literally fighting for their lives.

Download Black Hawk Down in Digital HD/4K from the iTunes store.

Black Hawk Down images are © Columbia Pictures. All Rights Reserved. 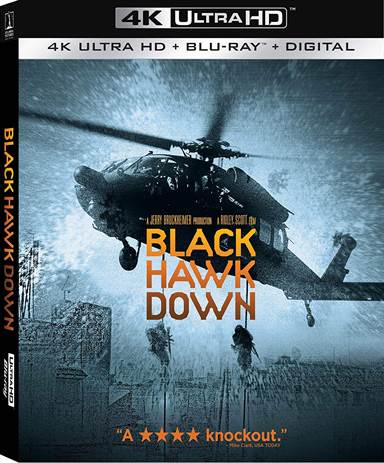 In 1992 United Nations forces were attacked in Somalia while trying to deliver food to the starving people.  Civil war and underhanded tactics by those in power had left that country in a state of desperation.  By 1993 Mohamed Farrah Aidid had a great influence over a number of citizens and commanded an army of insurgents who went around creating uprisings.  The Unified Taskforce sent to help the people was made up largely of American troops directed to keep the peace.  In October of 1993, they were deployed to Mogadishu to capture two of Aidid's leaders, Omar Salad Elmi and Abdi Hassan Awale Qeybdiid.  The film, Black Hawk Down, based on the true events of those days in Somalia, premiered 2001 and is now available on 4K Blu-ray for the first time.

They felt rather helpless…soldiers living in Africa, working to help the Somali people.  They watched as aid workers brought food to the starving people only to watch it stolen by Aidid's henchmen.  Aidid believed the way to keep people in line was to control them.  Hence the reason he would take the food meant for the people.  Unfortunately, the troops were helpless to stop him as they had orders to not engage unless fired upon first.

However, that all changed on that fateful morning in October.  The Unified troops had intel telling them the location of two of Warlord Aidid's top advisors.  With help, they made the move to capture the two men but found themselves under attack as they executed the extractions.  Suddenly one of the black hawk helicopters was shot down and the mission changed from capture to rescue.  Outnumbered and literally fighting for their lives, the troops must find a way to collect their wounded and dead and make their way to a safe part of the city before getting killed.

Director Ridley Scott does some great work here and the film has his obvious touches stamped all over it.  His camera work has the audience right in the middle of the action and he doesn't shy away from the more unpleasant aspects of war.  He also assembles an incredible cast including Josh Hartnett (The Black Dahlia), Ewan McGregor (Moulin Rouge!), Tom Sizemore (Saving Private Ryan), Eric Bana (Troy), William Fichtner (Armageddon), Sam Shepard (The Right Stuff), Hugh Dancy (Hannibal), Kim Coates (Sons of Anarchy) and Orlando Bloom (The Lord of the Rings Trilogy).  While all do a terrific job, it is Bana who is the stand out that received critical praise.

As war movies go this one is detailed and looks fairly authentic.  Considering it was based on a real event though, there has been some criticism regarding the nature of the troop's involvement and the portrayal of said events.  Some don't believe the movie accurately depicts what happens or why Troops were in Somalia, to begin with.  Regardless of your personal political views, Black Hawk Down is one heck of a war movie that leaves its audience wound up and tense after watching some incredible battle scenes.