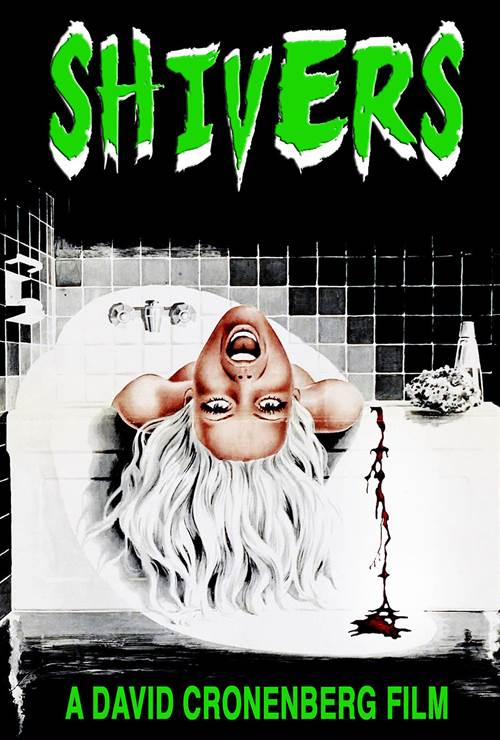 An early film by acclaimed filmmaker David Cronenberg. Residents of a high rise building are infected with a parasite that turn them into sex-crazed and violent hosts. A doctor races to contain the infection before it spreads from the building to the entire city.

Stream Shivers in Digital HD/4K from the AppleTV store. 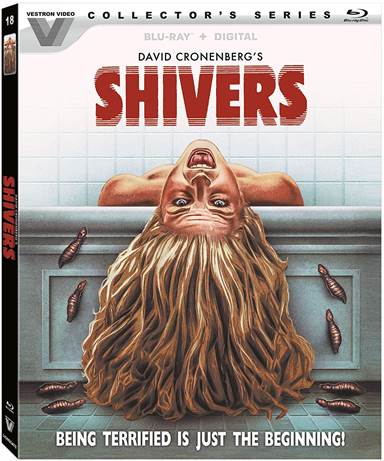 David Cronenberg, without hyperbole, is one of the greatest genre movie directors. Body-Horror, a term used to describe a sub-genre which showcases violations of the human body, is a genre some would say he single-handedly created, albeit admittedly the tropes existed before Shivers and Rabid melted the silver screen. However, no one director/screenwriter has done more within that field or has done it with such fervent originality, than David Cronenberg.

Scanners, Videodrome, and of course, The Fly, all helped establish him as one of the most potent talents of horror's golden age but he has contributed so much more...go and check out his IMDB, and then come back here, humbled.

His first real film, Shivers is a low-budget yet affecting film, and in case this is your gateway drug to his oeuvre (shame on you). A cult favorite, SHIVERS is acclaimed filmmaker David Cronenberg's (The Fly, Naked Lunch) controversial feature-length debut. When the residents of a luxury apartment complex outside Montreal are infiltrated by parasites and transformed into violent, sex-crazed maniacs, it's up to Dr. Roger St. Luc to contain the outbreak from spreading to the city at large in a film that "scares and shocks us because it's so cleverly made", Roger Ebert.

It has been a while since I have seen Shivers, I think I watched it on VHS in 1983-84, but I was more of a fan of Videodrome and Scanners. I must admit I was pleasantly surprised at how much this film holds up, and gets it right.

At every turn, this film defies convention and even challenges social mores. I will say that I found the opening sequence to be really disturbing when Dr. Hobbes sets upon a young woman in her apartment. He then dispatches her, tears off her clothes, and slices her stomach open, and sets her guts on fire. To cap it off, he then commits suicide, by slashing his own throat, over his victim's corpse. Even the most rabid and jaded horror fan will be disturbed by the unflinching realism.

At the time this movie was released, there was much furor over the graphic nature of the violence, as well as the obvious allegory to modern sexual promiscuity and STDs. Conservative Canadian critics took their time in picking apart Cronenberg's freshman project. Luckily, they had a small impact on his future releases.

Shivers is a great film with a simple premise but built on a strong foundation of twisted set pieces, which are done to great effect.

Lionsgate/Vestron Video has done a terrific job, especially for the price, with this Blu-ray release. Because of the 1080p High Def 16x9 presentation, with an English Mono DTS-HD Master Audio, Shivers looks and sounds excellent. I really have come to expect nothing but the best quality whenever I see this Vestron Collector's Series and they continue turning out wonderful products with this release of Shivers. The dark, interior scenes look great, and the parasites look gross and will have you squirming away from your TV.

The audio is solid, although not much in the way of a brilliant score, or sound effects, but there's plenty of dialog, and it is clear and upfront. However, when the infected residents of Starlight Towers attack the good Doctor, you will be hard-pressed not to be chilled by their lascivious and frightening screams. Mono or not, the audio sounds great.

My favorite part of many new releases is the Special Features, and there are plenty to sink your teeth into here. Some of the most noteworthy are: Audio commentary with David Cronenberg, who is always interesting to listen to; "Mind over Matter" an interview with David; ‘Good Night Nurse" an interview with Actress Lynn Lowry; and "Outside and Within" an interview with Joe Blasco, the makeup effects supervisor.

There's more where that came from, and you won't be disappointed with this release. If you are a physical media collector, and you must be if you are reading this, then I recommend you grab this one, and you won't have to ingest a parasite to get excited about it, either.