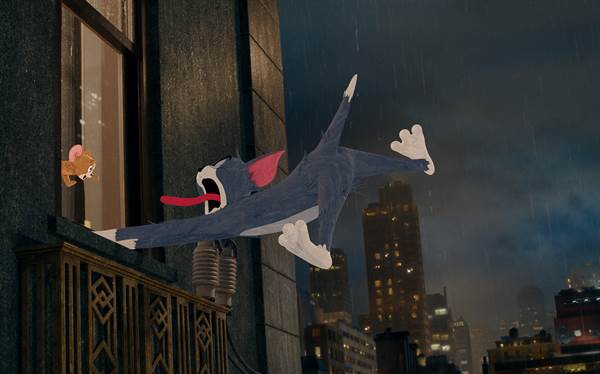 One of the most beloved rivalries in history is reignited when Jerry moves into New York City’s finest hotel on the eve of “the wedding of the century,” forcing the event’s desperate planner to hire Tom to get rid of him, in director Tim Story’s “Tom and Jerry.”  The ensuing cat and mouse battle threatens to destroy her career, the wedding, and possibly the hotel itself. But soon, an even bigger problem arises: a diabolically ambitious staffer conspiring against all three of them.

An eye-popping blend of classic animation and live-action, Tom and Jerry’s new adventure stakes new ground for the iconic characters and forces them to do the unthinkable… work together to save the day.

Download Tom & Jerry in Digital HD/4K from the iTunes store.

Listen to the Tom & Jerry soundtrack on Apple Music.


See Tom & Jerry's New Film For Free  2/19/2021 3:04 PM EST
One of the most beloved rivalries in history is reignited! TOM AND JERRY is premiering in theaters and HBO Max on February 26th, and FlickDirect has your exclusive passes to a Saturday morning virtual screening of the film. Enter to win a link to see the film at home on Saturday, February 27th.To enter for a chance to win one of twenty premiere codes for TOM AND JERRY follow these easy steps: Subs...  More>> 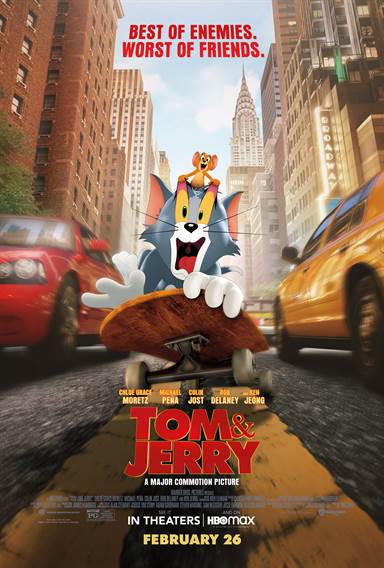 Eighty years ago, William Hanna and Joseph Barbera created a cartoon for MGM studios called Tom & Jerry.   They wrote 114 short films about the house cat, Tom, and his nemesis, Jerry the mouse.  Over the course of eighteen years, Hanna and Barbera but the unlikely duo in all kinds of situations pitting them against each other most of the time but, on the rare occasion, teaming them together against a common enemy.

Through the years, these beloved cartoon characters have been resurrected time and time again in various forms.  From several television series to a feature film and over a dozen direct-to-video movies, audiences of all ages have been entertained for three-quarters of a century and the tradition continues this week with the theatrical and HBO Max streaming release of Warner Bros. Pictures' Tom and Jerry. Using live-action humans, places, and objects mixed with animated animals (think Who Framed Roger Rabbit?), director Tim Story (Ride Along) combines nostalgia with Twenty-First Century pop culture.

Tom is a homeless, piano-playing cat who pretends to be blind while playing a synthesizer in Central Park, New York for spare change.  He amasses quite a crowd but when a small, field mouse, Jerry, takes Tom's audience by dancing to the music Tom plays, Tom chases Jerry revealing he can see, much to the chagrin of the crowd.

Kayla (Chloë Grace Moretz; Shadow in the Cloud) is a down on her luck girl from Pennsylvania, trying to survive and find work in New York City.  She would often slip into the Royal Gate Hotel to snack on the free food laid out for the guests.  On one occasion, she sees a young woman in a business suit sitting and waiting so Kayla asks what she is there for.  When the woman reveals she is there for a temporary job assisting the hotel with the biggest wedding of the year, Kayla tricks her into thinking she has failed the interview and then steals the woman's resume and gets the job in her place.

Discovering Jerry is in the hotel, Kayla is tasked with getting rid of him and enlists the help Tom.  As one could imagine chaos ensues.

Moretz has always been a solid actress, regardless of the role, and her portrayal as Kayla is no exception.  Supporting cast members Michael Peña (Ant-Man), Jordan Bolger (Peaky Blinders) and Ken Jeong (The Hangover) are enjoyable, entertaining, and help to move the plot along.

Of course, the "stars" Tom and Jerry are very well done, animated characters and for the most part, blend well with their real-life surroundings.  There are moments that remind the viewer of the original duo (or in my case, from the Saturday morning cartoons from the 1970s) but there are other times when they seem like entirely new characters.  The nostalgia won't be lost on older generations and the kids will find it cute and funny

Tom & Jerry start off slow but builds momentum throughout the film.  It is also clichéd and predictable and therefore isn't reinventing the wheel.  However, as a family-friendly movie, it gets high marks for making the plot fun for younger audiences while throwing in some private jokes for their parents.  While it isn't anything groundbreaking, Tom & Jerry will bring a smile to almost anyone, as they watch this game of, literally, Cat and Mouse.