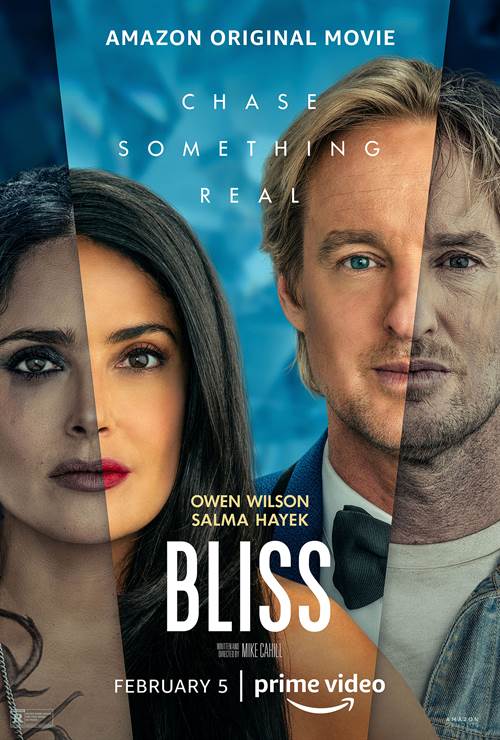 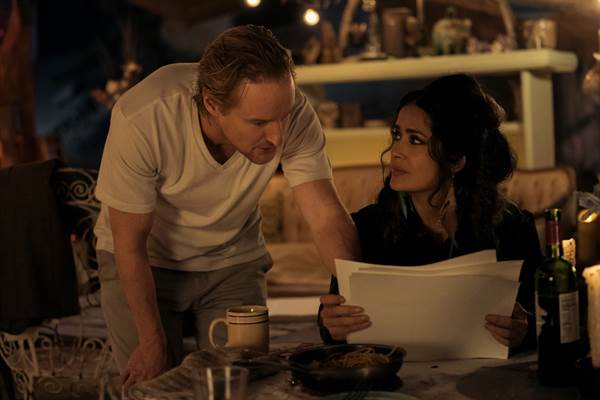 Bliss is a mind-bending love story following Greg (Owen Wilson) who, after recently being divorced and then fired, meets the mysterious Isabel (Salma Hayek), a woman living on the streets and convinced that the polluted, broken world around them is nothing but a computer simulation. Doubtful at first, Greg eventually discovers there may be some truth to Isabel’s wild conspiracy. 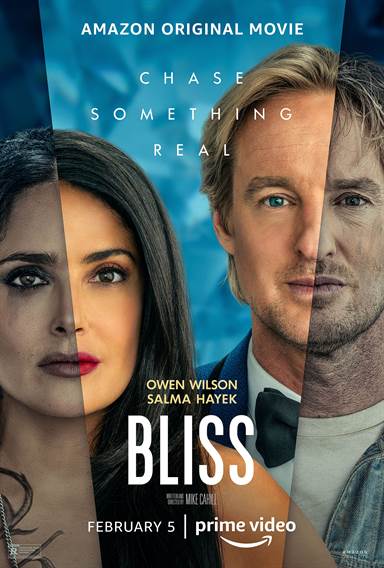 Bliss. Is defined as "perfect happiness, great joy" so as the saying goes…" ignorance is bliss".  The concept behind that quote, in an odd sort of way, is that what we don't know makes us happy, because we are unaware of what we are missing out on in life.  If we did, we might wish we had more.  However, what if we did know the bad stuff…poverty, illness, crime, etc., and then went to a different reality, where we had money, and lived in a beautiful home with beautiful surroundings?  We would probably feel blissful (and grateful) that we have everything we do.

Greg Whittle (Owen Wilson; Wedding Crashers) is completely dissatisfied with his life.  He has a dead-end job, his wife divorced him, and he accidentally kills his boss after he has just been fired.  He tries to hide the body and then leaves the building to get a drink at the bar across the street.  While there a stranger, Isabel Clemens (Selma Hayek; Desperado) tries to convince Greg that he is in a simulation and, not only are most of the people not real but that she (and Greg) can change the outcome of their situation simply by thinking about how they would like it to be.

By taking yellow crystals they become temporarily euphoric and can manipulate people and objects.  They live "off the grid" (basically homeless) and are generally happy though they need to steal from people to stay alive.  However, when Greg keeps seeing his daughter, Emily (Nesta Cooper; The Edge of Seventeen) Isabel is fearful he will get sucked into the simulation so she finds some blue crystals and suddenly they are both in different space and time where Isabel and Greg are Doctors and Isabel is studying the brain and how we can perceive situations differently based on our experience. However, when Emily shows up again, Greg starts to question which is the simulation and which is real.

Hayek shows off her talent in Bliss by switching from a homeless, out of control person to a sophisticated doctor presenting an experiment that is on the verge of a major breakthrough.  Wilson is decent as the confused individual behind Dr. Clemens experiment.  The two of them together are unappealing though.  They have no chemistry, so their relationship is completely unbelievable – in fact – almost uncomfortable.  Cooper shows why she is one of today's up and coming actresses as the daughter frantically searching for her father even though he has disappointed her time and time again.

Writer/director Mike Cahill (Another Earth) may have had a clear idea of what he wanted to say while writing the story, but it didn't translate well onscreen. In a Matrix meets Inception kind of way, the plot makes the viewer question what reality is and what is a simulation.  It leaves you wondering and pondering the film long after the credits roll and though this might seem like an intriguing concept, Cahill, perhaps on purpose, jumbles things together so the audience doesn't know what day it is or how much time has passed in the simulation.  Unfortunately, in this case, it simply leaves the viewer confused.

If you want a "thinking movie", Bliss might be right up your alley but for the majority of people, I suspect it will just simply seem weird.  Maybe with a different cast, the film might have taken shape in another way, for better or for worse, but under Cahill's leadership and Hayek and Wilson portraying these seemingly messed up individuals, Bliss simply doesn't cut it.
Do yourself a favor, skip it. 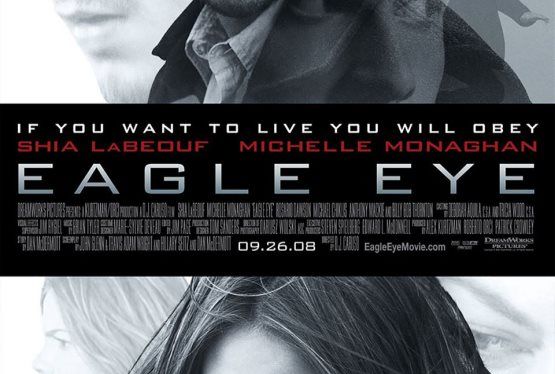