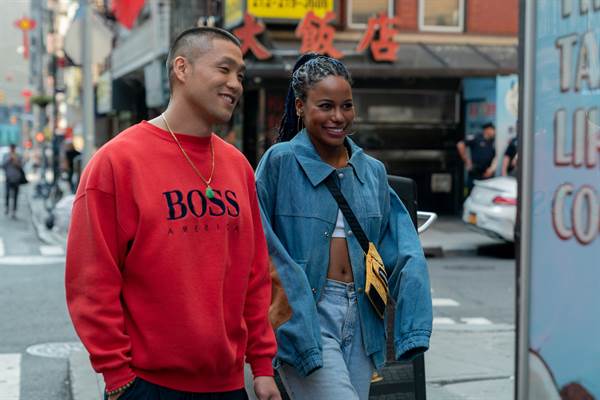 From acclaimed writer, producer, and restaurateur Eddie Huang comes his directorial debut BOOGIE, the coming-of-age story of Alfred “Boogie” Chin, a basketball phenom living in Queens, New York, who dreams of one day playing in the NBA. While his parents pressure him to focus on earning a scholarship to an elite college, Boogie must find a way to navigate a new girlfriend, high school, on-court rivals, and the burden of expectation.

Listen to the Boogie soundtrack on Apple Music. 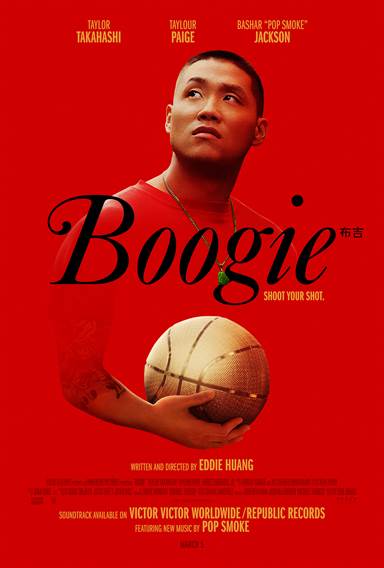 Through the years there have been tons of sports-related movies. Football, baseball, hockey, basketball…you name it, it has probably been done.  Heck, there is even a movie about bobsledding. So, when another sports film heads to theaters, you have to wonder what makes it different from all the rest?  The latest endeavor, distributed by Focus Features, Boogie, stars newcomer Taylor Takahashi as Alfred "Boogie" Chin.  The movie uses basketball as the backdrop to tell a larger story about expectations and family, which is the foundation of most Asian cultures.  The pressure of these expectations is what drives Boogie to make a decision that will ultimately shape his future in a way he never expected.

Boogie (Takahashi) grew up as an only child in an Asian home filled with anger and contention.  His parents (Pamelyn Chee; Burn and Perry Yung; John Wick: Chapter 2) are on opposite sides of every argument and Boogie gets caught in the middle.  All Boogie wants to do is play basketball so he can get a college scholarship.  He even changes schools so he can compete against the star player on the rival team, Monk (Bashar "Pop Smoke" Jackson).  Boogie watches and studies Monk as Monk plays ball in his neighborhood and of course, Monk knows Boogie, also one of the best players in the city, is watching him.

Meanwhile, Boogie's criminal father is trying to make deals while Boogie's mom argues with him and then hires a man named Melvin (Mike Moh; Empire) to try to get Boogie a scholarship to play basketball in college.  Unfortunately, Boogie's worst enemy is himself.  Recruiters see his talent, but they also see his poor attitude and his unwillingness to be a "team player".  This personality flaw makes college coaches steer clear of him, which forces Melvin and Boogie to choose a different path for his basketball career.

Takahashi is decent as the title character considering this is his first film.  Writer/director Eddie Huang (Fresh Off the Boat) needed to fill very specific criteria which offered limited choices and Takahashi met all the requirements so, while he isn't a horrible actor, he isn't going to be nominated for any awards.  Conversely, Taylour Paige (Ma Rainey's Black Bottom) as Boogie's girlfriend, Eleanor and Jorge Lendenborgh Jr. (Spider-Man: Homecoming) as his best friend, Richie, are both seasoned actors with a number of feature film credits to their names.  Pop Smoke plays a cocky gang member stereotype, which doesn't seem like a stretch for him.  Sadly, it is his only film credit as he passed away last year.

Huang, as a screenwriter, takes an interesting look at the ugly world of college sports recruiting and the all-consuming hold it takes on the athlete and their family's lives.  However, Boogie isn't really about Basketball and College scholarships.  It is more about two adults who don't especially like each other and use their child as a pawn caught between chess pieces.  The dynamic between Boogie and his parents and between Boogie's father and mother are the underlying forces that drive the story forward and which causes Boogie to make a rash decision that he will eventually regret.

Like most sports films, Boogie has more going on than it seems on the surface.  However, it seems to stay much more superficial instead of delving deeper into how Boogie's upbringing has shaped him into the young man showcased in the movie.

Those who grew up in the same type of home environment and/or those who have dealt with the cutthroat world of College Sports recruitment will obviously take away more from the movie than those who can't relate.

Overall, it's an okay movie worth watching once but not a film I would necessarily plan to purchase for my home video library.