Teddy and Claire are travel vloggers who run a channel called “SUPERHOST” where they travel and share their experiences in and around vacation homes, and until recently, had become successful doing it. With a dwindling subscriber count, they find the perfect opportunity to create content that people want to see when they meet Rebecca, the host of their most recent trip. Slowly they start to realize that something isn’t right with Rebecca, and as they investigate it further, they unlock a horrifying truth. She doesn’t just want a great review, she wants something far worse. 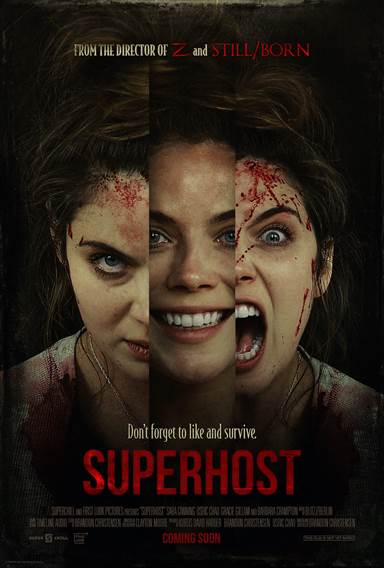 Writer/Director Brandon Christensen (Z) debuted his latest movie, Superhost, at this year's Popcorn Frights Film Festival where it won the top prize for best movie.  For Christensen, the Horror/Thriller genre is one he is both familiar and comfortable with.

He tends to take everyday scenarios and make them unique.  In Z it was a little boy with an imaginary friend, while in Superhost it is a couple and their terrible experience at what would equate to an Airbnb property.  Starring Sara Canning (War for the Planet of the Apes), Osric Chau (2012), and Gracie Gillam (Nine Lives of Chloe King), Superhost grabs the audience's attention from the start and never lets it go.

Vloggers Claire (Canning) and Teddy (Chau) have their own YouTube channel where they travel to various destinations and rate the location and their host.  While they have been rather successful in the past, they now find they are losing subscribers and revenue.  Desperate, Claire is willing to try almost anything to get people to watch their videos again.  With that in mind, they snag a reservation at a beautiful and well-liked mountain home run by bettylou52.  Excited to head there, Teddy also lets the fans in a little secret, he plans to ask Claire to marry him.

Upon arrival at the location, the two can't even get into the house because the alarm code is different than the one they were given.  Trying to call bettylou52 is to no avail as there is little to no cell service.  Suddenly, as if on cue, Rebecca (Gilliam) arrives out of nowhere to introduce herself and help Claire and Teddy to get in the house.  These unannounced "pop-ups" become a habit with Rebecca to the point of becoming creepy.  Of course, Rebecca has something else in mind and the cat and mouse game she plays with them is terrifying.

Christensen has a canny ability to make even the tamest objects (like a piece of mail) scary and he is very good at building tension, which is part of what can make or break a horror/thriller movie.  As with his other films, Christensen also adds a least one gory, bloody, and truly disgusting death scene to Superhost that is anything but expected.

The cast is well chosen and plays their parts beautifully.  Claire is bossy and bitchy giving the audience little reason to feel bad for her.  Teddy is sweet and caring but not the "macho male" type.  Gilliam, however, makes this film what it is.  As the viewer, you want to like her until you discover she is bat-shit crazy.  Her smile and bubbly personality hide the devious, mentally ill person hiding just below the surface. Barbara Crampton (You're Next) joins these three talented actors in a minor role that plays into Rebecca's plan.

The location is the perfect setting for a thriller. From the house to the woods surrounding it and the beautiful vistas looking out over the mountains, the isolation is its own character of sorts that helps set the stage for what is to come.

While Superhost doesn't have a ton of gore or jump scares, it embraces a "stalkerish" feel while incorporating much of today's pop culture and technology.  Christensen plays into the audience's psyche of being weary of Airbnbs while cranking that fear up a notch.

Take a creative and talented writer/director add in the perfect location for a horror/thriller and mix them together with a terrific group of actors and you have the perfect formula for a well-told, scary cautionary tale.  As long as Christensen keeps churning out quality work, we will continue to watch it.