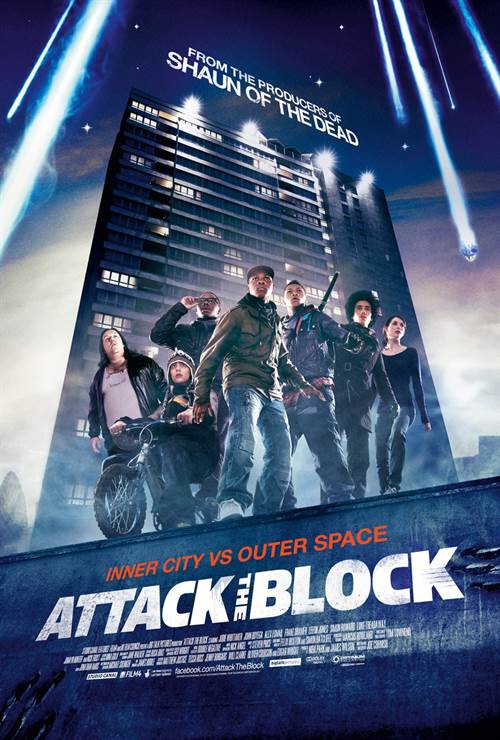 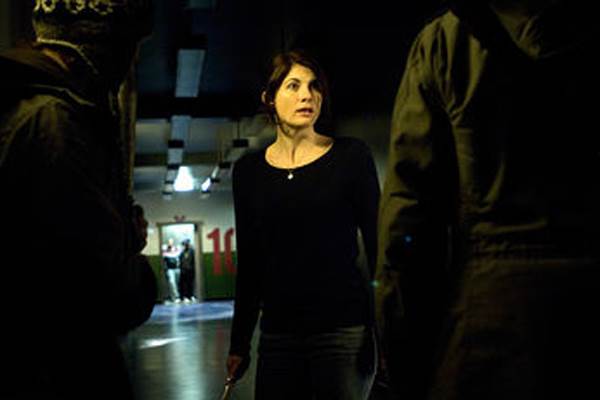 A fast, funny, frightening action adventure movie that pits a teen gang against an invasion of savage alien monsters. It turns a London housing estate into a sci-fi playground. A tower block into a fortress under siege. And teenage street kids into heroes. It's inner city versus outer space.

Stream Attack The Block in Digital HD/4K from the AppleTV store.

Attack The Block images are © Screen Gems. All Rights Reserved. 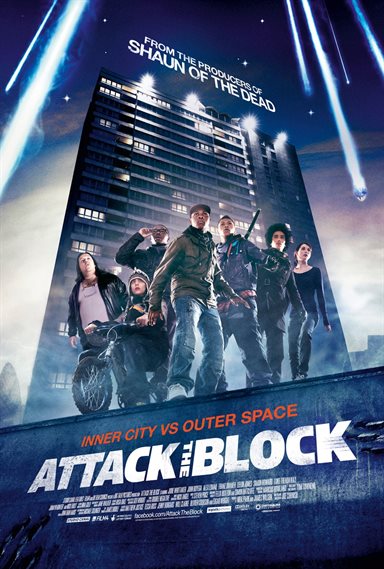 The South London housing estates, or "blocks", have always been a great place to stage a film, especially to a Yankee like me.  When I think of London, I think of some place nice and clean and free of crime where you can walk down the alley after having a few pints at the local pub and not feel the least bit afraid of being accosted.  However, films like last year's Harry Brown have shown a new side to London; a seedy underbelly of corruption and crime that lies on the outskirts of that fantastical version of London I've dreamed up for myself.  From what I've seen, South London is truly a scary place to not only live but especially to grow up where the teens seem to have lost all hope and as such turn to the things people do when they lose hope – drugs, crime, violence, sex and more wanton, senseless brutal violence.  Into this scenario we drop an alien invasion and there we have the set up for Attack the Block.

Attack the Block starts off with Jodie Whittaker as Sam, a young nurse who lives in the blocks of South London.  On her way home from work she is attacked by a gang of masked youth.  They threaten her, bully her and rob her.  She luckily escapes relatively unharmed but clearly shaken up by the experience.  The same youths that attacked her, soon after she runs away, spot a meteorite hit the Earth not far away from where they are so they investigate and find and kill an alien.  Soon thereafter, many more meteorites start landing releasing a slew of aliens bent on killing people in the block.

After seeing this intro I started wondering, "They aren't going to try and make me sympathize with this group of roughians I just saw picking and stealing from a defenseless woman, are they?  Those archetypes are meant for despising not for cheering on."  And yet that is exactly what they went on to do.  Let me back up here and tell you all the things that are great about this film, because there are a few, before I dive into that main problem I have.

The use of actual things – puppets, actors, shadows – to represent the aliens instead of relying on CG is so utterly refreshing.  Although it sometimes isn't pulled off completely and sometimes you can clearly tell that it is a puppet chasing after the kids, the effect of having something real there for the cinematographer to shoot, for the actors to play off of, for the audience to feel, it comes though and I appreciate it.  Speaking of actors, all the boys in the gang did an outstanding job but I want to especially point out John Boyega who plays Moses, the leader of the group who leads them out of alien oppression (a clever nod on the writer's part).  John played his part excellently and though I don't feel his character changed much from beginning of story to the end, for having this be his debut, the guy did a brilliant job.

Which brings me back to my problem, the writers trying to pull my heartstrings with characters who are unrepentant about their wicked ways.  Now don't get me wrong, I like a good anti-hero just as much as the next guy, but with a good anti-hero you are either let us in to see why they have to be bad or they must have so much charisma that they just win you over.  Unfortunately, Boyega plays Moses like a stoic stone of cold efficiency who knows what he does is wrong but doesn't care – it may be what he does to get by but he also enjoys the power it gives him.  Some may call this film a classic redemption story however, as I've stated before, I didn't see much, if any, change in Moses' character by the end of the film.  I could easily see Moses, after the credits roll, continuing to terrorize innocent women in the streets of South London.  What the events in the film taught him were not that he needs to repair his ways but what to do in case of an alien attack.  Instead, I find this set up to mostly resemble a horror film where the group of unlikable miscreants is set up at the beginning of the film before the killer comes in.

What this film is on the road to becoming is a cult classic.  I don't know if the general public will embrace this film, possibly for the same reasons as I have not embraced it.  However, there will definitely be a group of people who will absolutely love this film – they will attend the midnight screenings, they'll tell their friends and lend out the DVD they will eventually get to anyone who will watch - even when no one owns DVD players any more. 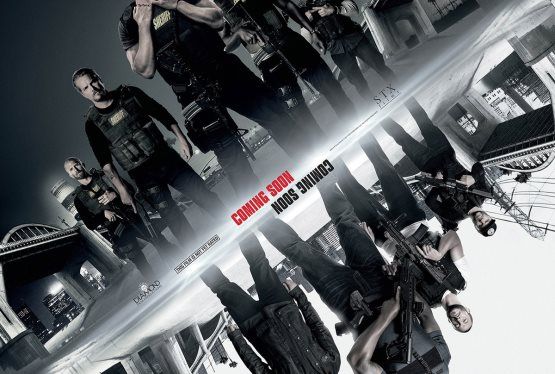 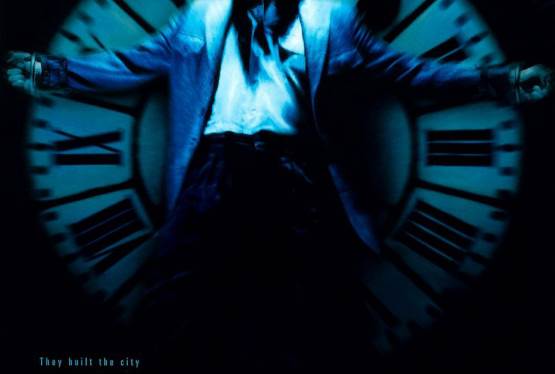