A moving drama about a middle-class English family learning to cope with war, told in a series of dramatic vignettes. The family, headed by the lovely and gracious matriarch, endures the departure of the father for the beaches at Dunkirk, the discovery of a wounded Nazi pilot, the death of the daughter-in-law in an air raid, and the entry of the son into the Royal Air Force.

Download Mrs Miniver in Digital HD/4K from the iTunes store. 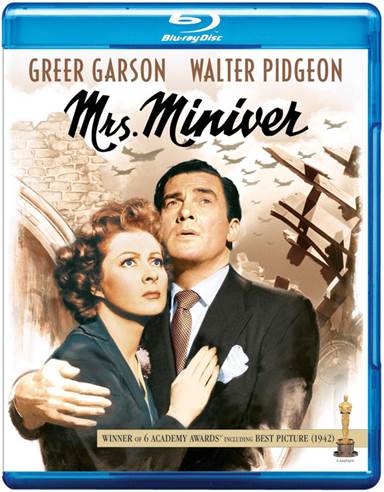 Winner of six Oscars including the coveted Best Picture Mrs. Miniver topped the box-office in 1942 with a war story that inspires. If you love the classics that have survived over the years, than this film, now on Blu-ray, should be in your home library.  The film's a great change from today's storytelling with acting that has hardly been equaled.

The movie centers on Kay (Greer Garson) and Clem Miniver (Walter Pidgeon) that are a happy family living in England. The couple has two youngsters at home and an older boy, Vincent (Richard Ney), away at college.  When Vincent comes home on summer break he falls for Carol Beldon (Theresa Wright) the daughter of an aristocrat Lady Beldon (Dame May Witty).  Britain declares war on the Nazis and Vincent joins the war effort in the Royal Air Force.  With air raids all around everyone is trying to cope with the attacks. Kay does her best to keep her family safe and worries about Vincent.  When a German pilot gets shot down and shows up at her home, Kay finds herself in jeopardy.

Taking his time with the story entwining normalcy, romance, fear and war into his film, Director William Wyler (Ben Hur) makes his film captivating, eye-opening and shocking during a time when US Troops are fighting battles in Europe and Asia.  His ability in 1942 to recreate the air strikes, bombing, and destruction in the shocking attacks on the cities and towns without the use of special computer generated images and make them believable shows Wyler's amazing talent.  He gets the best out of his talent with excellent portrayals bringing their charming, strong willed personalities to the screen.

The black and white film in the Blu-ray format gets some enhancement eliminating just enough grain to sharpen the film.  In this case it needs this facelift due to the dark nights, bombardments and interior shots that become more defined. After the first ten minutes I found the black and white very enjoyable to watch.

The sound quality has been enhanced with the DTS-Master Audio that makes the conversations clean and clear.  The bombing scenes usually take a toll for those stretching to hear dialogue during the roar of planes and the explosions, but with the volume properly adjusted I didn't miss a word.

The Special Features on the disc include the following:

"1942 Academy Awards Newsreel"- This is my favorite showing the glitz and glamour of Hollywood in the early 40s newsreel style including Greer Garson's acceptance speech at the awards ceremony.
The vintage cartoon "Blitz Wolf" features Hitler as the big bad wolf. Although you probably wouldn't see this in theaters today because of its content, the meaning surely was probably felt during WWII.
A featurette called "Mr. Blabbermouth!" exposes the backlash of the LA Daily News editorial concerning the attack on Pearl Harbor. It also makes fun of WWII enemies in an animated introduction.
Another small feature called "For the Common Defense" goes into our international police forces during the period.

FINAL ANALYSIS: For classic film lovers and those that just want to enjoy amazing acting (A)