From the producer of Paranormal Activity, Insidious, and Sinister comes Dark Skies: a supernatural thriller that follows a young family living in the suburbs. As husband and wife Daniel and Lacey Barret witness an escalating series of disturbing events involving their family, their safe and peaceful home quickly unravels. When it becomes clear that the Barret family is being targeted by an unimaginably terrifying and deadly force, Daniel and Lacey take matter in their own hands to solve the mystery of what is after their family.

Download Dark Skies in Digital HD/4K from the iTunes store. 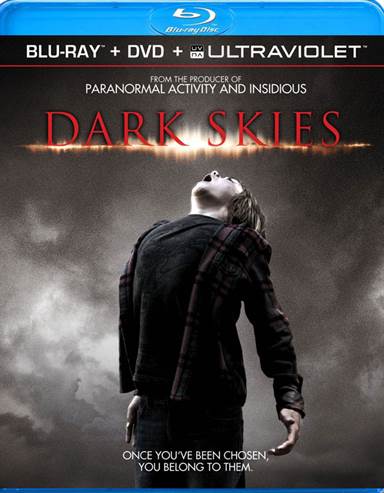 Believable characters played by a fine cast save Dark Skies and keep it just scary enough to make it work.  I am a fan of science fiction and especially those based on possibilities of being a reality, so I wasn't sure if I could be challenged with this film based on aliens.  After watching Dark Skies on Blu-ray one dark night however, I found it's got more veracity than I imagined.

The story centers on the Daniel and Lacy Barrett family who live in a small town on a peaceful street in a safe neighborhood.  You know, much like most suburban communities that are situated on the outskirts far from a growing city. They are an ordinary family with two boys, Jessie a teen and Sam a youngster with a vivid imagination. With a family so respected, who would have ever think that Sam would be the victim of abuse as a neighbor suspects, or was it a force so deadly he referred to his assailant as the Sandman.

The narrative gets real engrossing as we see what's going on in the home with household products staked in ways to form a celestial design on the ceiling, birds crashing into their windows, strange rashes and self inflicted pain putting them under the watchful eye of the local police. When Lacy comes across information she obtains on the internet however, a glimmer of hope emerges.

I like the way Scott Stewart directs his film by quickly laying out details of the Barrett's and then feeding his audience the strange happenings to this average family.  He works his characters in a way that even though it's obvious that they are being targeted by super beings we find the Barrett's unbelieving and just thinking they're dealing with extenuating family problems.  After all, the Sandman is a believable nightmare that a boy Sam's age may have, right?  Although Lacy has some doubts in the beginning, when things start to get under her skin, she's determined to get to the bottom of Sam's Sandman story.

The actors put high energy into the film creating characters that change from ordinary to hysterical at times.  I love Keri Russell she's such a good actor as shown by her performance in TV's The Americans. She tops that role by giving us this lovable housewife who gets drawn into a force with which she cannot compete and comes up a winner. Under the direction of Stewart she brings out her vulnerable side. Her character tries not to accept what has been happening to her family, but easily succumbs to the control of a ‘force' determined to achieve their directives.

The bonus features are good and also included in the box is a certificate for UltraViolet where you can instantly stream and download the film onto your iPod, iPad, iPhone or computer.

Special Bonus Features:
"Commentary with writer/director Scott Stewart, producer Jason Blum, executive producer Brian Kavanaugh-Jones and Editor Peter Gvozdas- Turn this on after you have seen the film and get some meaningful insight into how it was done from stacking to creature.
"Alternate Ending and Deleted Scenes"- Actually both the ending that goes along with the feature released in theaters and an alternate that's in the bonus features works well for me.

The video quality for the Blu-ray and DVD with a widescreen 2.40:1 aspect ratio is very good.  While I am not fond of this aspect ratio for my 16x9 HD Television, I found the bars top and bottom to be a bit thinner than regular letterbox.  The clear and bright presentation makes for great entertainment and there is no distortion that I could find.

The audio for the film using the Blu-ray 5.1 DTS HD Master Audio or the DVD with Dolby Digital 5.1 both deliver very good sound.  I found the dialogue easy to understand with no distortion of any kind.  The special sound effects are cool and the music blended just right for an eerie movie.

Dark Skies has been rated PG-13 by the MPAA for violence, terror throughout, sexual material, drug content and language - all involving teens. Be cautious when deciding to allow immature teens to see the film as it does have some scenes that may be inappropriate.

FINAL ANALYSIS: A cool Sci-Fi thriller with a different kind of twist. (B)