By day Gerri Dandridge is a sexy professor, but by night she transforms into a real-life vampire with an unquenchable thirst for human blood. So when a group of high school students travel abroad to study in Romania, they find themselves ensnared in Gerri’s chilling web of lust and terror. Charley and “Evil” Ed must stop Gerri from drinking and bathing in the blood of a “new moon virgin,” which just so happens to be Charley’s ex-girlfriend, Amy. They enlist help from Peter Vincent, the vampire hunting host of a reality show called "Fright Night," to drive a stake through Gerri’s plan and save Amy from a fate far worse than death. 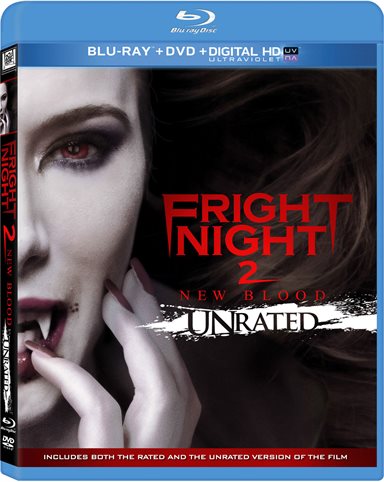 Tom Holland's 1985 Fright Night may not be the unrecognized "immortal classic" its fiercest followers claim it is, but one thing it resolutely is not is pretentious. Fright Night was a charming, even sweet, entry in the comedy horror sweepstakes, a nice combination of chills and laughs as a hapless teenager enlisted the aid of a once famous horror star, now consigned to merely hosting a television series devoted to old films, in order to bring down a vampire. Hollywood, never a place to leave well enough alone, has returned to the Fright Night stable now several times. Fright Night Part II (seemingly still unreleased on Blu- ray) appeared a few years after the original Holland film, once again offering Roddy McDowall as timid erstwhile star Peter Vincent. A pretty lackluster 2011 remake then showed up in both 2D and 3D iterations, and now we have this straight to video "sequel" to the remake, despite the fact that no characters are held over and aside from the basic plot element of a hapless teenager trying to bring down a vampire (or vampiress, in this case) with the help of a character named Peter Vincent, this entry has virtually no connection to any of the previous entries. The law of diminishing returns is borne out here, as perhaps evidenced by the fact that this is a straight to video to release. It's hard to keep a good vampire down, but when that unholy bloodsucker is stuck in a lamentable enterprise like this, any self-respecting denizen of the night might be hoping for an unexpected sunrise to put him (or her) out of his (or her) misery.

Are there scares in Fright Night 2: New Blood? If you can call them that, yes—but they're almost all manufactured ones, as evidenced by the film's prologue, which finds a lone woman spooked by weird sounds at a gas station she's stopped at in the middle of the night, sounds frightening enough that she decides to get back in her car. Cue the jump cut to a huge beast suddenly at her window, replete with booming "startle" LFE effect on the soundtrack. This is pretty indicative of the level of thought and/or craft that has gone into this almost completely predictable exercise.

Charley Brewster (Will Payne, Mr. Selfridge) is part of a student exchange program studying in Romania. Charley is attempting to convince his girlfriend Amy Peterson (Sacha Parkinson) that he hasn't been cheating on her, while simultaneously withstanding the juvenile antics of his best friend and hotel roommate, Ed Bates (Chris Waller). In yet another sign of lazy writing, Charley gazes out his hotel room window to see what appears to be a naughty lesbian interlude between two women, which suddenly gets a bit on the bloody side. Charley calls to Ed, who's in the bathroom, except guess what happens when Ed comes out? Why, no one's in the window anymore. Gosh, what a surprise.

Charley is soon titillated to find out that the woman he's spied is actually the kids' teacher for their exchange program, a beautiful expert in Romanian history named Gerri Dandridge (Jaime Murray, Defiance). Only, it turns out that—gasp—Gerri is actually a vampire. Of course Charley struggles valiantly to get everyone from the police to Amy and Ed to believe him, but do they? Three guesses and the first two don't count. And just as predictably, it just so happens that one Peter Vincent (Sean Power) is oh so coincidentally in Romania filming his Fright Night television series. Hmmm . . . . I wonder what will happen next.

Fright Night 2: New Blood is by the book filmmaking, which is not to say that it's completely worthless. There is some great Romanian scenery on hand, and the film has a palpable air of erotic decay. The sad part about all of this is that the film references a real life woman, one Elizabeth Bathory, a 16th and 17th century Hungarian who is described as being the most prolific female serial killer in history. Some of Bathory's story has passed into folklore, and the film utilizes one particularly chilling element of those tales—virgins being hung by their ankles and drained of their blood, in which Elizabeth supposedly bathed to keep her youthful good looks—to good effect. But this is a wasted opportunity. The film would have been much more viscerally exciting if it had simply told Bathory's story without stuffing it inside the junk food of a tired reboot of Fright Night.

Fright Night 2: New Blood is presented on Blu-ray courtesy of 20th Century Fox Home Entertainment with an AVC encoded 1080p transfer in 1.78:1. This appears to be a digitally shot feature and that actually contributes to a rather nice looking offering, despite this film's incredibly dark overall ambience. Fright Night 2: New Blood traffics in the same shrouded world of its 2011 predecessor, but this high definition presentation actually offers generally excellent shadow detail, and fine detail pops extremely well in close-ups. You've heard everything that Fright Night 2: New Blood's lossless DTS-HD Master Audio 5.1 mix has to offer—the thudding LFE effects accompanying jump cuts, the whooshing sounds of fast moving vampires, the slow trickle of blood out of a body—but at least this track offers a decent amount of aural fun, something the rest of this film sorely lacks.

The filmmakers seem to think that offering a female vampire is some sort of new idea, which begs the question of whether they've heard of any number of films from Dracula's Daughter to The Vampire Lovers. But even putting that issue aside, Fright Night 2: New Blood suffers from a tired, predictable plot and a lack of the goofy fun that made the original Tom Holland opus so entertaining. Genre completist's may want to check this out, for it does offer some great looking video which includes some nice Romanian locations (not to mention copious female nudity in this "unrated" version), but others will probably want to pass this by.