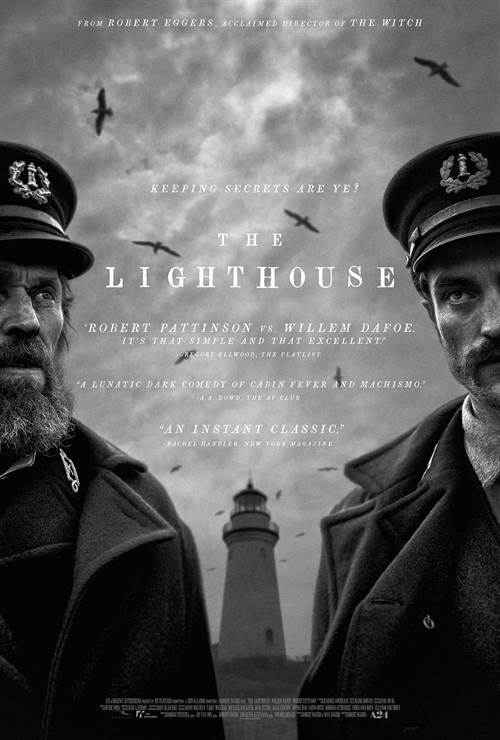 From Robert Eggers, the visionary filmmaker behind modern horror masterpiece The Witch, comes this hypnotic and hallucinatory tale of two lighthouse keepers on a remote and mysterious New England island in the 1890s.

Download The Lighthouse in Digital HD/4K from the iTunes store.

Listen to the The Lighthouse soundtrack on Apple Music.

The Lighthouse images are © A24. All Rights Reserved. 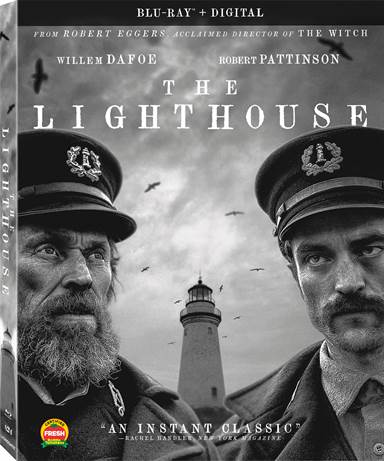 In 2015 Robert Eggers amazed audiences with his feature film directorial debut, The Witch.  Eggers' talent for storytelling and filmmaking belied his lack of experience in writing and helming a movie.  The result was remarkable as The Witch was nominated for 67 awards and won another 43 from organizations the world over. When his sophomore effort, The Lighthouse, was delivered this past fall, fans and critics were expecting greatness once again and it is safe to say they weren't disappointed.    Eggers tells a haunting tale, based on folklore, leaving you wondering if what the characters experienced was real or just in their imaginations.  Luckily this chilling story hits stores on Blu-ray and Digital HD today.

Ephraim Winslow (Robert Pattinson; Twilight series) decided to leave his job as a Canadian timberman and took a four-week contract job as a wickie at an isolated New England lighthouse.  His new boss is a miserable old sailor/lighthouse keeper named Thomas Wake (Willem Dafoe; Spider-Man) who constantly makes more and more demands on Winslow as Wake continually berates him.  When Winslow finds a small scrimshaw of a mermaid hidden in his mattress he decides to keep it.  Suddenly he has strange visions and dreams including the decapitated head of the former wickie (whom Wake told Winslow killed himself after going insane) and dreams of a mermaid trying to seduce him.

When Winslow kills a seabird on the day before he is supposed to leave, Wake tells him that brings bad luck as it is believed the birds encapsulate the souls of dead sailors.  Suddenly the winds change bringing dangerous storms and delaying the ferry and the two men are trapped on the island together for even longer.  One night when they get drunk, Winslow confesses his real name is Thomas Howard and Winslow was his foreman who died in an accident that Howard didn't prevent.   As the days of storms continued, the men became more agitated with each other and their fights became more violent with no end in sight.

Eggers is a prolific filmmaker evoking emotions from the audience while employing non-complex techniques.  The decision to shoot in black and white makes the story even more ominous and mysterious.  His visuals are minimal yet impactful and, just like with The Witch, you are left wondering if the images really happened or are just the ravings of an insane person.

The story only involves three characters and one of them, the mermaid, is on the periphery so it is really just Winslow and Wakes moving the plot along.  While this can be mildly confusing as moments, it delivers the sense of isolation that Eggers is hoping for.  While Pattinson gives one of his best performances – a far cry from sparkling vampires – it is Dafoe's brilliant acting that makes one realize they are watching something truly special.

The 1080p video quality is rather remarkable considering the movie was shot in a 1.19:1 aspect ratio on film.  Even utilizing this technique, the details are clean and sharp and the greys offer varying shades.  The DTS-HD Master audio 5.1 clean and sharp with the powerful soundtrack laying  beneath the all-important dialogue.  The ambient noises play quietly in the background with birds squawking overhead and the waves crashing on the shore.  The Blu-ray disc has only a few extras but they total over an hour of footage.  They include: The Lighthouse: A Dark and Stormy Tale has three parts: Myths Behind the Madness, Enchantment in the Light and Figments of Imagination, Audio Commentary with co-writer/director Rob Eggers, and Deleted Scenes.

Eggers has a unique and fascinating viewpoint but I find his endings leave me unsatisfied and with more questions than answers which is rather frustrating.  His storytelling style is arguably some of the best I have seen though.  Pattinson and Dafoe are well matched and give outstanding performances.  They play off each other like dueling pianos in a quest for dominance.  The visuals are memorable and the soundtrack is unusual yet effective.  Probably one of the best films of last year, it is a must-watch much like Eggers career as a director that is still in its infancy.