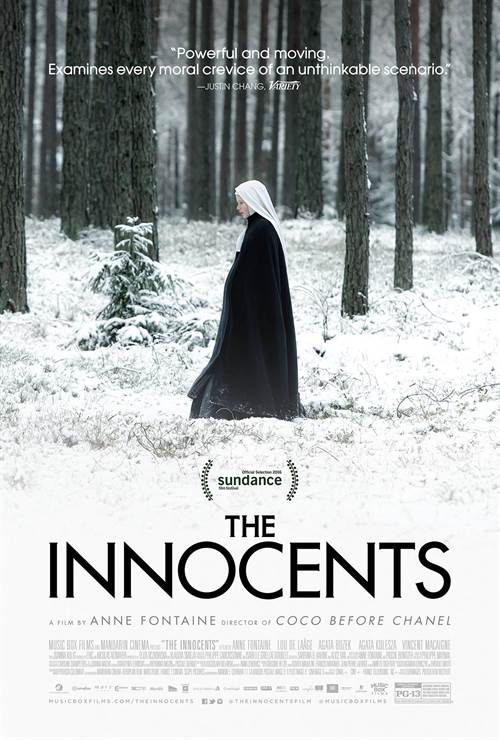 Warsaw, December 1945: the second World War is finally over and Mathilde is treating the last of the French survivors of the German camps. When a panicked Benedictine nun appears at the clinic one night begging Mathilde to follow her back to the convent, what she finds there is shocking: a holy sister about to give birth and several more in advanced stages of pregnancy. A non-believer, Mathilde enters the sisters' fiercely private world, dictated by the rituals of their order and the strict Rev. Mother (Agata Kulesza, Ida). Fearing the shame of exposure, the hostility of the new anti-Catholic Communist government, and facing an unprecedented crisis of faith, the nuns increasingly turn to Mathilde as their belief and traditions clash with harsh realities.

Stream The Innocents (Les Innocentes) in Digital HD/4K from the AppleTV store. 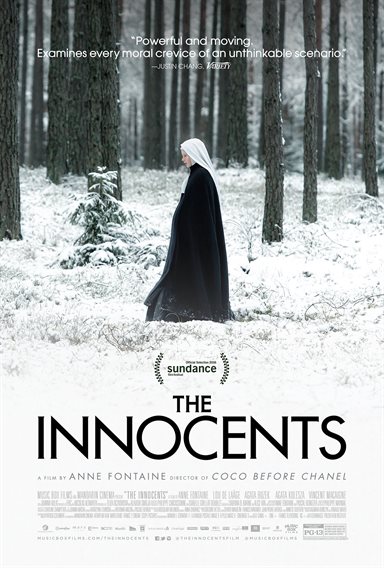 As the old saying goes, "war is hell".  Of course that is true of the soldiers fighting those wars but even more so for the civilians witnessing the atrocities war can bring.  Everything from riots and bombs to lost limbs and life befall those not actually fighting in the war.  The toll it takes on anyone unlucky enough to be surrounded by it can be devastating and life altering. No more is this evident than in the new film The Innocents by director Anne Fontaine (Coco Before Chanel).

It's 1945 in Warsaw and Mathilde (Lou de Laage; L'Attessa) is a French Red Cross doctor helping to tend to the French wounded soldiers.  When a Polish nun comes begging for her to help the convent Mathilde is reluctant.  However, once she follows the nun what she finds is shocking.  She discovers one nun in labor and several more in the advanced stages of pregnancy - all raped by soldiers.

As she agrees to help, she begins making clandestine trips to the convent to deliver these bastard children one by one.  As the nuns are very pious and take a vow not to be touched they are at first reluctant to allow her to examine them but eventually they learn to trust her. Once the newborns are delivered the Reverend mother (Agata Kulesza; Ida) takes them to their new families or so the nuns are lead to believe.

Over time there is a level of trust and friendship between the ladies of the convent and Mathilde, especially with one French-speaking nun in particular, Maria (Agata Butek; Redemption) who acts as a translator.  As the nuns struggle with their plight, their faith begins to waiver and they seek guidance from non-believer Mathilde.  Mathilde also begins to struggle with her own thoughts as she becomes enveloped into this fiercely private world.

This film is a masterful look at how our experiences shape and change us.  The messages of perseverance and hope in a time of despair are powerful.  The dialog is minimal at times, which allows the silence to fill the moments and give the audience a chance to reflect on these women's plights.  The subtle nuances of Fontaine's direction draws the audience in and captivates us.  Her use of color (or lack there of, as the case may be) until the very end of the film is effective and obviously deliberate.

de Laage is superb as Mathilde and her gentle strength comes across as clear and true.  Kulesza and Butek are also terrific as the leaders of the convent at odds with what has happened yet resigned to do what is necessary to protect the nuns and their convent.  The entire cast blends well and makes this film truly an ensemble piece while simultaneously showcasing its stars.

For those who like independent, foreign films this is a treat in a sea of options to choose from.  Well written, well cast, intently filmed, it is a highlight to many of the film festivals at which it has been screened.  Worthwhile and noteworthy, I recommend spending a few hours devouring this movie.   It makes the audience think about the innocent victims of war whether it is the orphans, the nuns or their infants and the perseverance of the human spirit at the worst of times. 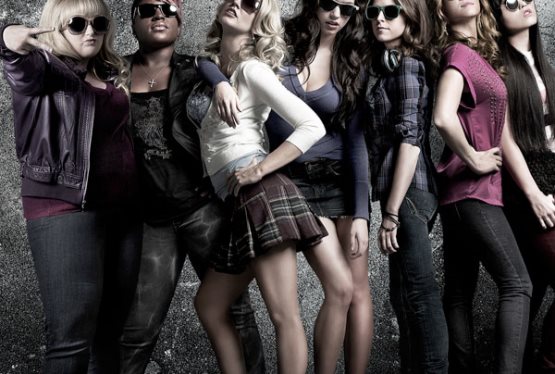