Home / Movie Database / Back to the Future 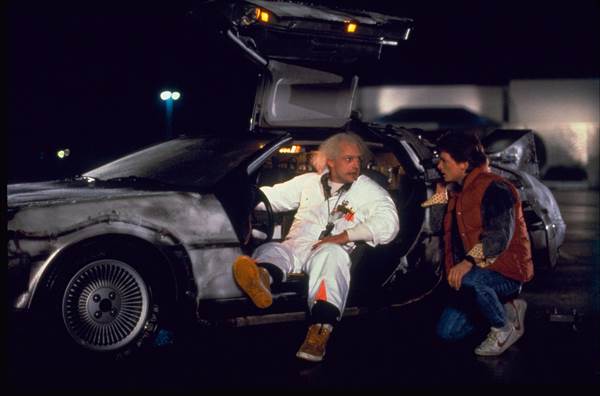 High schooler Marty McFly Michael J. Fox, during the height of his TV success) is catapulted back to the '50s where he sees his parents in their teens, and accidentally changes the history of how Mom and Dad met. Filled with the humorous ideology of the '50s, filtered through the knowledge of the '80s (actor Ronald Reagan is president, ha!), the film comes off as a Twilight Zone episode written by Preston Sturges. Filled with memorable effects and two wonderfully off-key, perfectly cast performances: Christopher Lloyd as the crazy scientist who builds the time machine (a DeLorean luxury car) and Crispin Glover as Marty's geeky dad.

Download Back to the Future in Digital HD/4K from the iTunes store.

Listen to the Back to the Future soundtrack on Apple Music.


Win A Copy of The Back to the Future: The Ultimate Trilogy Blu-ray  10/9/2020 6:58 PM EST
If you are like me and were a teenager in the ‘80s, you no doubt understand the phrase "Heeeelllllooooooo, McFlyyyyyyyy" and where it comes from.  If you don't, then you have yet to experience the brilliance of a Robert Zemeckis (Forrest Gump) film.  Either way, you are going to want to hold on tight and enter the Back to the Future Trilogy contest.  That's right, the Michael J. Fox (Family Ties)/...  More>>

Back to the Future Musical Finally Making Its Way to the Stage  5/17/2019 2:38 PM EST
It was announced today that the "Back to the Future" musical will finally be coming to the stage. From Feb. 20, 2020 through May 17, 2020, fans can catch the show at the Manchester Opera House in the U.K.Tony winner John Rando will be directing the musical from a book by the film's co-writer Bob Gale. Original Back to the Future composer Alan Silvestri, along with Glen Ballard, will be doing the s...  More>>

Universal's Re-Release of The Back to the Future Trilogy Pays Off  10/22/2015 4:37 PM EST
Yesterday was "Back to the Future Day", and to commemorate the event, Universal re-released the trilogy in 1,815 theaters.  The film grossed $4.8 million so far, and will continue to be shown through the weekend. The re-release gave a new generation the chance to experience the now classic film franchise on the big screen for the first time.  The event was widely celebrated, and even Pepsi and USA...  More>>

Universal Announces 25th Anniversary Edition of Back to The Futu...  6/28/2010 12:29 PM EST
Universal City, California, June 28, 2010 - At 88 miles per hour, Michael J. Fox and Christopher Lloyd took millions of spellbound viewers on a high-flying voyage across the space-time continuum in a trio of wildly inventive tales that broke box-office records around the world. To celebrate the 25th anniversary of the Academy Award®-winning cinematic franchise that generated nearly one billion dol...  More>>


Back to the Future 30th Anniversary Trilogy Blu-ray Review 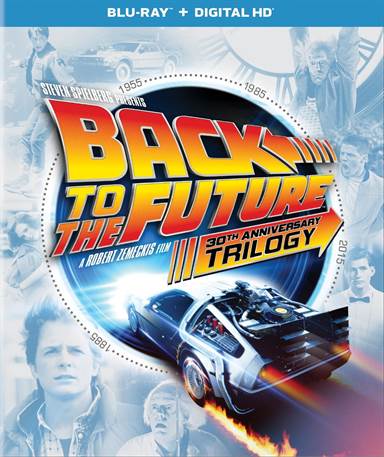 2015 seems to be the year of Back To The Future, which appeared to hit it's frenzied peak at the end of October.  From documentaries about the films to movie marathons in theaters across the country, the franchise has seen a resurgence in popularity.  Cashing in on the frenzy, specialty items from Pepsi and USA today sold out in minutes and Universal Studios and Amblin Entertainments have released a 4 disc, 30th anniversary Blu-ray.

Everyone knows the story of Marty McFly (Michael J. Fox; Spin City) and Doc Brown (Christopher Lloyd; A Million Way To Die In The West) and their time travelling machine made out of a DeLorean.    In Back To The Future, Marty travels back to 1955, interfering in his parents first meeting, and almost altering history and his very existence.  Spawning two sequels, the group then travels to October 21, 2015, and then, ultimately, back to 1855.  Of course, the first of those dates popped up on our calendar this year and numerous celebrations heralded a new era of love for the series.

The first three discs in the special edition Blu-ray are the movies themselves and hours of mostly previously released bonus material.  Each one has deleted scenes, Tales from the future that range from the Physics of Back To The Future to The Test of Time, and behind the scenes material.  The fourth disc is a brand new group of bonus features, including a 2015 message from Doc Brown and an insight into restoring the DeLorean.  It also offers two episodes of the animated series and fake commercials for Jaws 19 and the hoverboard from Back To The Future II.

These movies are video transfer, making them seem as if they are live camera shots instead of film.  The 1080p High Definition shows great clarity and detail.  The DTS-HD 5.1 audio is sharp and crisp.  For a 1985 movie, this Blu-ray enhances the quality and makes an endearing, new classic come to life even more.

So many times, director Robert Zemeckis (Tales From The Crypt) waxes nostalgic about how the original movie almost didn't get made.  He regales audiences with the tales of being rejected by everyone, beside Steven Spielberg (Saving Private Ryan), until he made a successful film.  Thankfully, the film did get made and has become an enduring testament to telling a great story in a fun, youthful way.

The 30th anniversary Blu-ray 4 disc set comes in a great little book-like packaging with pictures and details of each disc.  For the Ultimate Back To The Future fan, this is a great holiday gift and one to be treasured.

Back To The Future was beloved when it first arrived in theaters, and, from the frenzy that was witnessed this past month, that love hasn't abated one bit.  If you don't own the films, this is the perfect excuse to go out and buy them now.

Read More Back to the Future Reviews