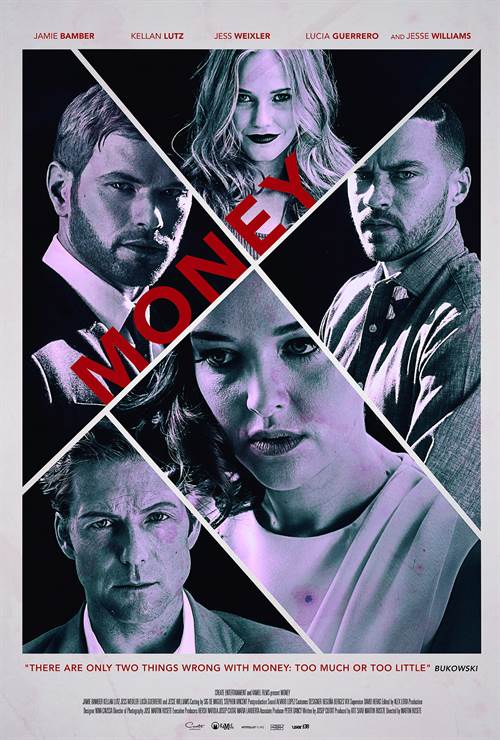 In this high-stakes, fast-action thriller, two pharmaceutical executives are about to get away with stealing $5 million after selling trade secrets to the highest bidder. But a charismatic con artist shows up to derail their plans and holds them hostage at gunpoint during an all-night standoff where loyalties are tested and true motives revealed. Featuring a powerful ensemble cast, including Jesse Williams, Kellan Lutz and Jess Weixler, MONEY is a chilling lesson in greed that will keep you guessing until the very end!

Download Money in Digital HD/4K from the iTunes store. 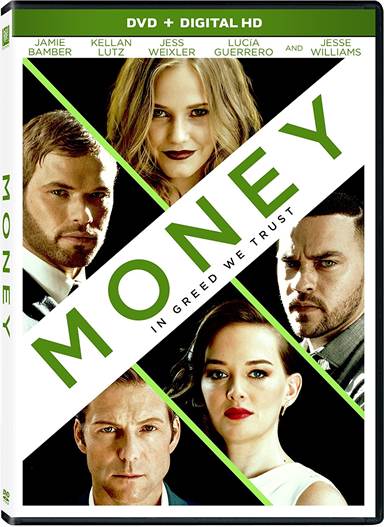 They say money is the root of all evil.  Some people will do anything to get it while some of those who have it will do anything to keep it (or get more).  It can certainly make life easier in some ways but harder in others and it is the rare individual who is left untouched by its appeal. Writer Josep Ciutat and Director Martin Rosete explore some of these ideas in their film Money, out now on DVD and Digital HD.

Mark (Kellan Lutz; Twilight) and Sylvia (Jess Weixler; The Good Wife) have a charmed life.  He is an executive at a pharmaceutical company and she comes from money, recently quit her job and plans to open an art gallery. They have a beautiful house in the country and want to start a family.

Sean (Jesse Williams; Grey's Anatomy) who works with Mark, is an arrogant, cocaine snorting ass and is into fast cars and beautiful women.  His latest girlfriend, Christina (Lucia Guerrero; Luna, el misterio de Calenda), is a graduate student.  When the four sit down to dinner at Mark and Sylvia's home things don't end up quite as planned and of course, it all revolves around money.

When Mark and Sylvia's new neighbor, John (Jamie Bamber; Battlestar Galactica), shows up unexpectedly to introduce himself, Sylvia invites him to join their little dinner party; however, it shortly becomes clear that John isn't who he says he is.  As it turns out, Mark and Sean stole company secrets and sold them to the highest bidder in a case of industrial espionage.  Their ill-gotten gains netted them five million dollars and John stopped by to steal it. Unfortunately, things don't go as smoothly as he would like and the end result is a series of twists and turns that make for an interesting film.

While the film started off slow and I was concerned because the acting didn't seem as though it was going to be that strong, it steadily picked up and improved.  The suspense and plot twists kept me engaged and interested and the acting definitely got better over time.  At a mere 87 minutes, I actually wished this movie had been longer.

Where the female cast members lacked a little bit in the acting department their male counterparts more than made up for their deficiency.  Don't get me wrong, Weixler and Guerrero were adequate, but not spectacular, while Williams and Lutz were stronger.  However, the real star was Bamber.  His calm methodical demeanor belied a monster hiding within and his delivery of lines was spot on.  Had this been a bigger budget film, I could see someone like Tom Hiddleston (Thor) playing this part but Bamber knocked it out of the park regardless.

For their first feature film, Ciutat and Rosete did well.  The script flowed beautifully and the dialogue was deliberate and with no superfluous wording. The concept was interesting and nicely executed (no pun intended).  Rosete got creative with the limited budget he had but pulled it all together.   He used a variety of shots that never bored the audience.