Next Transformers Film Could Feature Dinobots 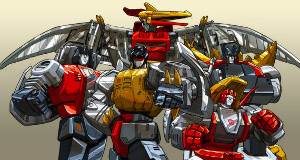 There are rumors swirling around about the possibility of the Dinobots making an appearance in the next "Transformers" film.

Supposedly, the villain Lockdown will be in the film and is said to own a ship full of decommissioned Transformers including the Dinobots.  It is said that Optimus Prime and Bumblebee will use the Dinobots  Grimlock and a Pterandon to ride into Hong Kong.

Filming beings next month in Michigan and Chicago, and will be in China in October.