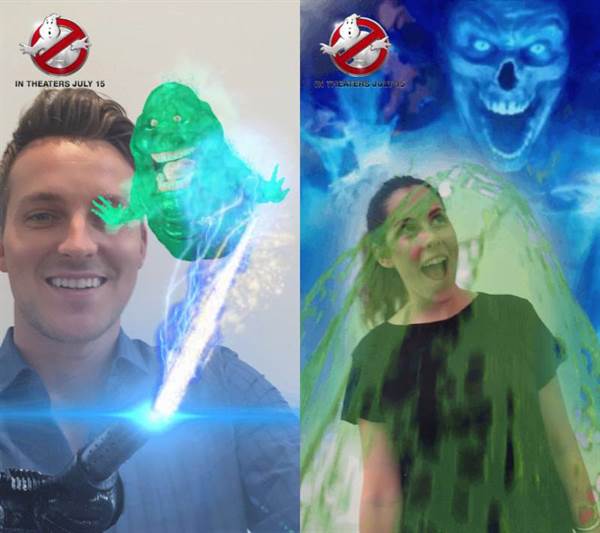 For the first time ever, Snapchatters can use both the front and rear cameras of their phones with a new type of Lens as millions of users become true Ghostbusters on the popular digital platform.  Using the front camera on your smart phone, you can "Bust" ghosts. By switching to the rear camera, users can "Slime" unsuspecting friends or themselves.

Sony Pictures is the first brand partner to use this new kind of Lens on Snapchat, taking full advantage of the fact that smart phones come equipped today with front and rear- facing cameras.

Sponsored Lenses allow brands to take part in the communication between Snapchatters in the most interactive and personal way. Lenses are a creative, dynamic and fun extension for Snapchatters to make the most out of their selfies. They offer users the opportunity to add a selection of real-time visual effects and sounds to their photos.

With the Ghostbusters Lenses, the iconic music from the movie will play in the background as Snapchatters can choose between wearing a proton pack and becoming a genuine Ghostbuster or getting doused with green slime by a playful apparition.

"Whether its dog ears or flower crowns, face swapping or alien eyes, Snapchat's popular portfolio of Lenses are highly engaging pieces of content that fans truly love," said Elias Plishner, Executive Vice President of Digital Marketing for Sony Pictures. "We are very excited to be the first ever partner to introduce this new type of Lens to the market. These Lenses are fun and creative extensions of Ghostbusters and we think Snapchatters will have a great time using them."

Ghostbusters makes its long-awaited return to theaters on July 15 with a cast of hilarious new characters. Thirty years after the beloved original franchise took the world by storm, director Paul Feig brings his fresh take to the supernatural comedy, joined by some of the funniest actors working today - Melissa McCarthy, Kristen Wiig, Kate McKinnon, Leslie Jones, and Chris Hemsworth. This summer, they're here to save the world! The film is produced by Ivan Reitman and Amy Pascal, and written by Katie Dippold & Paul Feig, based on the 1984 film "Ghostbusters," an Ivan Reitman film, written by Dan Aykroyd and Harold Ramis.

Countdown to the release of Ghostbusters (2016) with the The Movie Hype App.

Get The App!
Filed Under: snapchat, mobile, ghostbusters