Mortal Engines looks absolutely stunning...you will be floored at the intricacy of the details on screen. 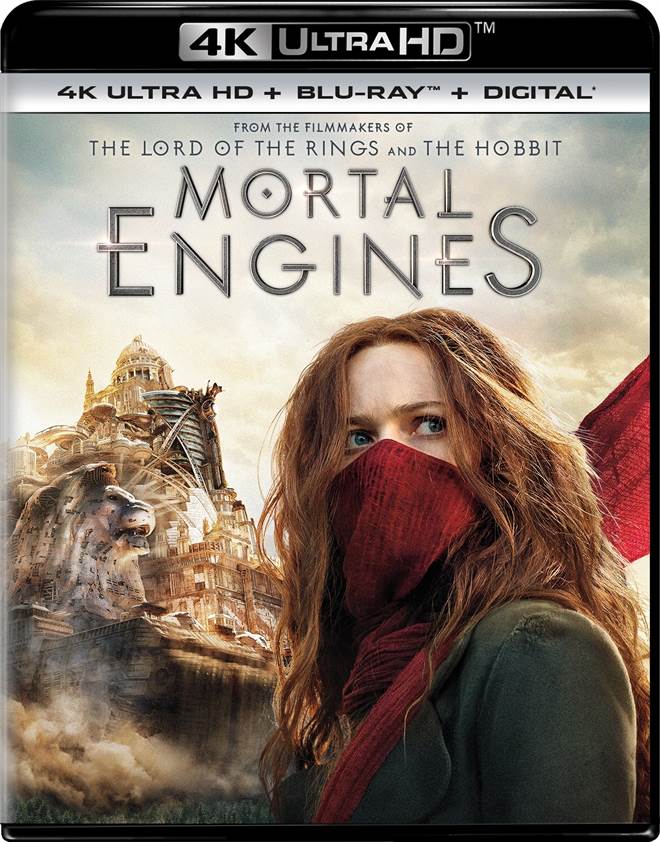 Purchase   DVD/Blu-ray/4K UHD
My mother always said, if you don't have anything nice to say, then don't say anything. My grandma, however, said if you are reviewing a film, then put them on blast for being derivative, unimaginative and trite. Luckily, I'm about to find a happy mixture of both of their points of view, as I review Mortal Engines.

Post-Apocalyptic fiction/entertainment is up my alley. I love the bleak and nihilistic settings, whereby, harried and hopeless survivors are forced to barely eke out a meager existence. Through blasted landscapes and poisonous fumes, our heroes must survive the depredations of a hostile environment, while fighting to save the last vestiges of their race, and in the process, perhaps save their own humanity.

And then we have Mortal Engines:

Thousands of years after civilization was destroyed by a cataclysmic event, a mysterious young woman, Hester Shaw (Hera Hilmar), emerges as the only one who can stop London — now a giant, predator city on wheels — from devouring everything in its path. Feral, and fiercely driven by the memory of her mother, Hester joins forces with Tom Natsworthy (Robert Sheehan), an outcast from London, along with Anna Fang (Jihae), a dangerous outlaw with a bounty on her head.

Let me say, I have been a die-hard Peter Jackson fan since Bad Taste, not to mention Heavenly Creatures, the Frighteners and, being an obsessed Tolkien fan, that carried on to his Lord of the Rings Trilogy. I admire his attention to detail, his love for horror, and just cinema in general. I was a bit surprised that this adaptation felt so damned forced and seemed to flounder, without any real backbone. As the movie begins, the Predator-City of London is riding down a much smaller Bavarian Mining town, The Mayor (I Guess) of London, Magnus Crome (Patrick Malahide), announces: "Prepare to ingest!" As the massive London, swallows the weaker town, whole.

This seems to be the catchphrase. You should prepare to ingest what you are about to see, and hopefully, avoid indigestion.

Having never read the source material, I cannot comment if that was the issue, or not. However, this movie felt like a welded-together-monstrosity of The Road Warrior, Howl's Moving Castle, Star Wars, The Lord of the Rings (movies) and the Terminator, all wrapped up in a Steampunk exterior.  London even takes on the mantle of the Death Star, with Thaddeus Valentine (Hugo Weaving) as the chief bad guy. Not nearly as menacing as Darth Vader, though.

I'm not exaggerating either, it wore its influences on its shiny sleeves, and that was the unfortunate bit of business. This movie LOOKS gorgeous. The visual effects, digital and practical, even some miniatures, not to mention the stunt work, and hell, even the score, were all top-notch. I wanted to like this film as it has a lot going for it, but I shouldn't have to force myself to like it.

Good news, especially for fans of the movie, the resolution: Native 4K (2160p) HDR: Dolby Vision + HDR10 Aspect ratio: 2.39:1, looks absolutely stunning. From the chase scenes across the plains of Europe to the gorgeous skies above, where dwells Airhaven, the atmospheric abode of those few that chose to flee from the battlefields below. Even to the rotting, undead skin of the Cyborg, Shrike, you will be floored at the intricacy of the details on screen. The depth of field is amazingly sharp and clear, not to mention the color palette from the costumes to cerulean eyes of the murderous Shrike, you can't take your eyes off the screen.

The audio, Dolby Atmos English: Dolby TrueHD 7.1, doesn't disappoint either as the rumbling treads of Predator Cities, the hustle and bustle of the London Underground, the Massive explosions of the MEDUSA superweapon, as it destroys the Shield Wall, all provide a fantastic backdrop to the eye-candy.

We use the word immersive, but this movie really did an excellent job of tweaking your senses (audio/visual, not smell-o-vision, yet) and making you feel like you're a part of the implausible universe.

The Special Features aren't too shabby either with the standard fare of commentaries and making-of featurettes. I have included a full list below but "Welcome to London" and "End of the Ancients" were pretty interesting to watch.

Make no mistake, the film has its flaws, but for those that like their entertainment light on plot and heavy on special effects, Mortal Engines will not disappoint you. Just don't expect any great solutions to the Brexit problems, even as you watch a hyper-aggressive and hungry as hell mobile London devour its European neighbors.

For more information about Mortal Engines visit the FlickDirect Movie Database. This release has been provided to FlickDirect for review purposes. For more reviews by Leonard Buccellato please click here.

Allison Rose
If the steampunk aspect of Mortal Engines is one of the highlights ( and believe me, it is) then the script is one of the lower ones.
Full Review | Grade: C